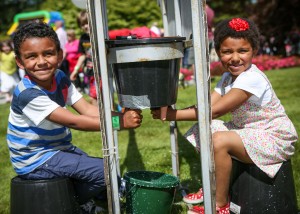 A magnificent sunny day greatly added to a very successful inaugural Waterford Country Fair held at Mount Congreve on Sunday last.
Numbers who attended the event were estimated at approximately 8,000 level, with Gardaí and stewards kept really busy throughout the event.
According to Country Fair Chairperson Jo Breheny: “We worked with the Garda and Waterford City & County Council in implementing a traffic management plan.
On the day, there were delays experienced by patrons accessing the Fair, particularly in the busy post- lunch period.
To alleviate the problem, several more car parking areas were opened up in Mount Congreve and this seemed to improve the situation.
For example, one man took one hour to arrive from Tramore in the mid-afternoon period, which was the peak time.
Overall, the organisers were delighted with the event and the fantastic support from the public.
Thousands showed up to experience a slice of country life in the stunning gardens of Mount Congreve. Events staged on Sunday last ranged from equestrian activities, family fun events, wonderful musical entertainment, while great food and produce from the region featured in trade stands.
We even tried butter milk and home made butter from Mullinavat’s Breda McDonald who had had old churns working, as well as barrel dating back to 1862.
Sheepdog trials, shearing displays and pony rides were also held, while farm animals, beekeeping and birds of prey were also showcased.
Equestrian events, country games, along with Irish and modern dance proved popular and there was great use of the bouncy castles and slides by the many children who attended with their families.
Proceeds from Sunday last will be donated to CRY.ie (Cardiac Risk in the Young), a charity which raises awareness of sudden cardiac arrest in young adults.
CRY spokesperson Orla Durkan said a special walk will be held in Portugal this October.
And improvements to make next year’s event better than ever are in the pipeline, according to County Fair spokesperson Karen Cheevers.