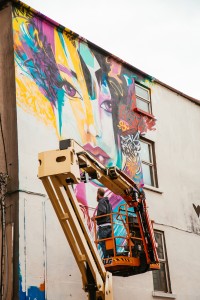 Waterford Walls have just wrapped up on their third annual festival in Waterford City. This year they brought 40 national and international artists to three hub areas, namely O’Connell Street, New Street Gardens and the recently opened Waterford Greenway.
This year’s entire festival programme was free to festival goers. Waterford Walls hosted a range of activities for the whole family including art jams, dance jams, guided are trails, live music, and an art exhibition in their HQ.
The festival also hosted an expert panel talk on Creativity and Innovation on Saturday August 19th, at 6.30pm in the Yard.
Their expert panel included Tomm Moore, founder of Cartoon Saloon, renowned visual artist Joe Caslin and festival founder, Edel Tobin.
The festival also offered a host of free workshops for children as part of the festival, including break dancing, bring your own clothes printing, spray painting, stencilling and graffiti.
This year’s festival grew not just in size but in calibre. The artists involved in this year’s festival were some of street arts most recognizable names including Fintan Magee, Sonny, Ador, James Earley, Joe Caslin and Animalito Land.
The festival also grew itself beyond the art, creating two hub areas, including the brand new Yard on O’Connell Street with live music, a bar, fresh food and great atmosphere.
This year’s festival really showed that Waterford can compete with cities all over the world on the street art and festival front.
If you’re interested in joining Waterford Walls on a guided art trail with one of their trained guides contact waterfordwalls@gmail.com.
And most importantly don’t forget to mark your calendar for Waterford Walls 2018, which will run from August 17th to 26th.
* If you would like to tour the open air gallery left after the festival you can find the trail map in their programme, available on their website www.waterfordwalls.ie. They’re also still available around Waterford city and county, and nationally in shops, bars and tourist information destinations.