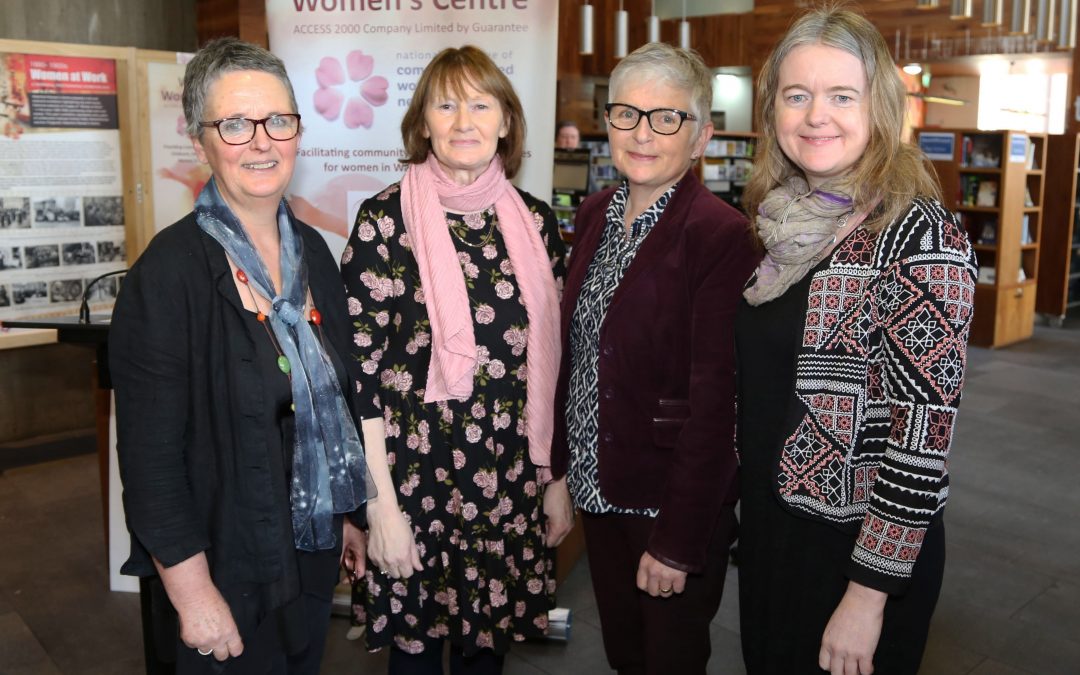 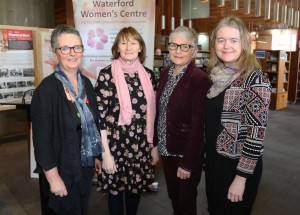 On Wednesday 4th March the Women’s Centre in partnership with Waterford Civic Trust unveiled a Blue Plaque to the Daly Family, Mai, Debbie and their mother Margaret who ran a café for the poor of Waterford, better known as ‘the shop’, at no 5 Arundel Lane. The event was attended by over 100 people. Des Griffin, Chair of the Waterford Civic Trust, was the MC on the day and welcomed the Mayor of Waterford Cllr. John Pratt. The Mayor acknowledged the kindness of the Dalys in providing a place where the poor of Waterford were treated with compassion and kindness. Breda Freyne, niece of Mai and Debbie Daly unveiled the plaque and nephew Robert Lanigan spoke on behalf of the Daly family, many generations of whom were in attendance. Robert paid tribute to his aunts and his grandmother’s kindness and generosity and said they would have not wanted the notoriety of the Blue Plaque as they were very humble women. Eleanor Murphy, Women’s Centre History Group, spoke about the history of the Daly Family and gave examples of how these resilient women treated everyone who came to their café equally and without judgement.
Paddy Ryan and Jim Casey, Trado, provided the music in the Lane before the unveiling, with appropriate songs like ‘Skibbereen’ ringing out. Billy McCarthy and Davy Walsh, in attendance at the event, are two of the original organisers who supported the sisters to oppose the attempted eviction in the early 1970s, and were instrumental in organising the community of Waterford City to come out in mass to successfully prevent the eviction taking place. The Gingerman provided tea and sandwiches for everyone, a welcome respite from the cold and rain.
On Thursday 5th March over 100 attended the launch of the annual Women’s History Exhibition in Waterford Central Library. The exhibition was launched by Jane Cantwell, Waterford City and County Libraries, who said how delighted they were to be trusted with this important exhibition and acknowledged its popularity. Jane said it was important that this exhibition is somewhere that is open and accessible to everyone, and the library provides such a space. Ann Fitzgerald, Women’s Centre History Group, acknowledged the support received for the new and improved exhibition stand from Creative Ireland Waterford. 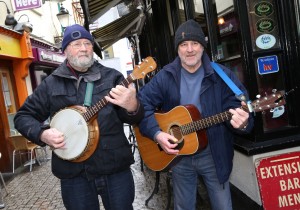 Ann also acknowledged the collaboration between the History Group and Andrew Kelly in the ongoing work of recording women’s history in Waterford. This year’s exhibition, which will remain in the library until the 27th March, also celebrates 25 years of the Waterford Women’s Centre. Maeve O’Grady, founder member of the Women’s Centre, spoke about the growth and development of the Centre since 1995 and attributed its successes to working collectively both at a local level and national level, as one of 17 Women’s Centre under the National Collective of Community Women’s Networks (NCCWN).
Launched also at the event was the exhibition of beautiful handmade bonnets, by women from the Women’s Centre ‘Bonnet Project’ facilitated by Liz Heffernan and funded by the WWETB. The bonnet exhibition is part of the larger ‘Roses from the Heart’ exhibition remembering Waterford women who were transported to Tasmania in the 1800s. Michelle Tyler, Women’s Centre, read a letter from Christine Henry, founder of the Roses from the Heart Project, appreciating the continuation of this work in Waterford.
Music was by the Women’s Centre singers under the direction of local musician Jane O’Brien-Moran who led the audience in a rendition of Happy Birthday to the Women’s Centre to end the festival. Thanks to all who attended the festival and to those who supported it; the Central Library, Waterford Civic Trust, WIT, WWETB, Creative Ireland Waterford & Waterford Council Festival Grant.