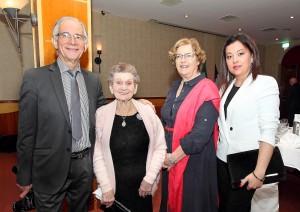 A delegation of over 20 people came to Waterford from St Herblain recently to mark the 35th anniversary of the Town Twinning relationship, which is one of the lenghtiest in Ireland.
The delegation visited Waterford City Hall on the Friday morning for a very informative presentation by Waterford City & County Deputy Manager, and Director of Economic Development, Lar Power.
He told them about how the city and county is “rising up again” fter some difficult years, noting the growth in tourism, the Viking Triangle project, the new House of Waterford Crystal plant, our many festivals and the proposed €300 million redevelopment of the North Quays, where it’s envisaged that new apartments, shops and offices, in addition to a new pedestrian bridge, railway and bus stationm will be created.
Waterford’s commercial role was highlighted, in addition to the many services it supplies, from housing, water, infrastructure and many other services .
The development model for Nantes and St Herblain is somewhat different, it was noted and there was a good exchange of questions at the event.
Mayor of St Herblain, Bertrand Affile, posed several questions in relation to the North Quay project, including the shopping development and its potential impacts on the ‘exisitng’ city.
Population growth, he was told, is the key to success of the plan, with the population of Waterford prohected to double over the next 20 or more years, thus consolidating its position as one of the country’s five largest urban centres.
New investments are coming to the city as Dublin grows increasingly very busy, struggling to cope with additional congestion and a lack of housing: this overheating is likely to make things more positive for the regional cities in the years ahead.
Mayor Affile was impressed with the new city investments at the Viking Triangle and Apple Market, which he also visited: Waterford Institute of Technology and the provision of additiuonal higher education resources were also discussed.
The delegation was intrigued by the reworked and covered Apple Market. We pointed out that the Michael Street shopping centre project which is expected to see more ‘covered’ retail offerings in the area.
Town Twinning Chair and former councillor Davy Walsh explained many of the new developments and projects, and the visitors also took in both the Catholic and Protestant Cathedrals, both designed by John Roberts. From there, they went to the City Arms for lunch.
Another part of the delegation visited St Declan’s Community College in Kilmacthomas, and De La Salle College, both of which are interested in school exchanges, while others visited Central Arts and the Waterford Academy of Music and Arts at Passage Cross, in addition to a meeting with Julie Quinlan of WIT’s School of Music.
Mayor Affile was interested to learn more about services for older people in Waterford and with that in mind, they were given a visit and tour of the St John’s College project by Respond’s David Phelan, where the development was explained by Dermot Power, one of its residents. He spoke about its community atmosphere, the warm and inviting nature of the place, the cafeteria which is open to the public in daytime, the library there, the classes provided with an emphasis on mental health, and the musical groups and choir that have been formed there.
The safety and quality of accommodation was noted during the visit, with one of the French group suggested that they would even like to retire there so good is the offering. The investment of €12m in this non for profit housing initiative also was explained.
The following day, the delegation visited Mount Congreve Gardens, enjoyed some of the Imagine Festival events, while others took in the local coastline.
They also saw the new Waterford Greenway and were most impressed, having learned about it the previous day during Lar Power’s detailed presentation. 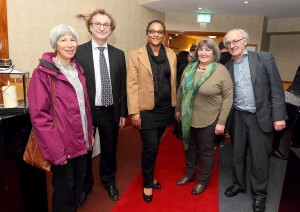 On the Saturday evening the French provided Breton music in the Munster Bar, with many locals coming to enjoy the French accordion playing by Gwenhael, the bombard trumpet and flute by Louis and guitar by his son.
Friday evening saw the 35th anniversary banquet dinner in Dooleys Hotel, hosted by Metrpolitan Mayor Sean Reinhard.
Among the attendance were those who were hosting the French visitors in their homes, along with many who had assisted in the project, including Town Twinning Deputy Chair, Cllr Jason Murphy and Eddie Ruane from Waterford City & Council (who will soon retire). Dooleys put on a fine meal that was widely praised.
Mayor Reinhardt noted the strong ties between the two cities and praised Davy Walsh (Towh Twinning Chairman) for his efforts over the years in bringing so many exchanges to Waterford.
It had been to the mutual benefit of both cities: the role of cyclist Sean Kelly was recalled, as was the 1998 Tour de France, when a big French contingent came to Ireland and later attended the Munster Hurling Final in Thurles between Waterford and Clare.
Mayor Reinhardt noted the strong relationship over the years and acknowledged the efforts of the local committee, groups that did exchanges over the years and how it was important for language and cultural connection to keep it alive.
Some great friends of the initiative had come from France, like Roland Pavajeau, former Olympian runner and deputy Mayor when the twinning started in 1982. Also Martial Catherine, who delivered the speech from France for a 1916 anniversary event last year. The committee is completely voluntary and special mention was made of 95-year-old Pauline O’Neill who assisted in hosting families from the beginning of the twinning and understood the concept.
It was also noted that in the period of this formal friendship that Waterford had had 35 Mayors compared to St Herblain which had just three: Jean Mary Ayrault, later to serve as Prime Minister of France, followed by Charles Gautier and now Bertrand Affile
Mayor Affile spoke about the many new projects which have been planned in terms of school exchanges between Waterford and St Herblain (such as the Gutenberg College), in addition to exchanges in culture and sport.
Horticulture, via the Jules Rieffel School, Jacques Berthier in St Herblain was also singled out for bringing French and Irish groups together.
The plan is to create more projects and friendships, the Mayor added. He advocated deepening relationships and to create more actions for the year ahead between the various stakeholders. The twinning remains hearitly strong, and long may that remain the case.