Speaking to a wave of journalists about the grim reality of a Motor Neurone Disease (MND) diagnosis might not be a choice the majority of those living with this particularly cruel terminal illness would plump for. But in the case of Róisín Foley, dealing with the media as she has during MND Awareness Month has been akin to a calling, just nine months after she received the devastating news.
“Well, the way I look at it, if my talking about it is going to increase awareness about Motor Neurone Disease and help raise funds for the (Irish Motor Neurone Disease) Association, then that’s a good thing and I’m very happy to do it,” she told me. “And to be honest, my children are still in school for the rest of the month so I’ve been able to give a nice bit of time to think about what I’d talk about when doing interviews, and I have to say I’m really enjoying it. Now it’s hard to listen to myself on the radio, I’ve not been coping with that too well (!), but other than that, I’ve been having a good time.” In the space of just 75 seconds, Róisín had won me over. Her attitude in the context of the disease she’s living with left me reflecting on the inconsequential nonsense I frequently find myself supposedly troubled by. 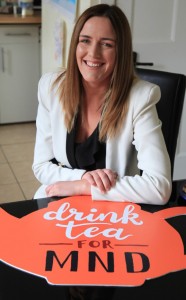 Róisín Foley's attitude to life in the face of her Motor Neurone Disease diagnosis is a testament to positive thinking.

The feeling that something wasn’t quite right first crossed Róisín’s mind on her 30th birthday. “My hands felt weak, and I was having trouble tying my shoe laces,” she stated. “So that led to all the tests and ended in me being told I had Motor Neurone Disease. I was in total shock, the whole thing just felt so surreal. Right now, I feel like I’m doing pretty well, it (the disease) is mostly just affecting my arms and my hands, and it’s still very hard for me to imagine not walking or not talking, so I’ll just have to cross those bridges when I come to them instead of worrying too much in advance about it.” MND wasn’t something Róisín had a great deal of knowledge about prior to her diagnosis. “Nobody in my family or anyone I’ve known has ever had it so all of this was new to me,” she said. “It was a bit of a shock reading up about it, but then the (IMND) Association has really put my mind at ease and they’ve been brilliant when it comes to reassurance, information and support, and the people I’ve met because of my diagnosis have been amazing and they’ve made my life since last September so much more positive.”
Trying to compute the long-term future and the unavoidable reality of what MND will lead to is something which over 370 households across the country – nine of them in Waterford – share with Róisín Foley.
And as a single mother to three young girls, Rosie (5), Sadie (6) and Rachel (12), wondering what lies down the line for all three has been as natural a contemplation for Róisín as it is an unavoidable one. “That’s been the most difficult part of all of this for me,” she admitted. “The five and the six-year-olds kind of understand to a certain extent but given their age they can only imagine what’s happening now; they can’t really think too far down the line. I’ve told them that I might end up in a wheelchair, and they’ve both told me they don’t want that to happen but I’ve taken the conversation with them as far as I can given how young they are. Whereas with Rachel, she naturally understands a lot more. She knows what’s happening but she’s also started doing her own bit of reading into MND and she’s very good at explaining to other people even now in terms of what’s happening to me, and I’m really proud of her.”
Does Róisín feel any level of resentment given that MND is partly depriving Rachel of the what encompasses reality for most 12-year-olds, and has therefore and unavoidably forced her to grow up a little quicker?
“Definitely,” she replies. “I definitely feel that for her in terms of her growing up that bit quicker. But in saying that, I’ve got three younger sisters and a younger brother who all live nearby and all of us are very aware of Rachel and not wanting to put too much on her. In the morning time, she helps me with the girls, doing their hair, teaching them to do up their own buttons and so on, but we still have the arguments any mother would have with a girl her age when it comes to cleaning her own bedroom. But she’s a real help. She’s absolutely amazing. The smaller two know that my hands aren’t great – I can still make a cup of tea and give them a hug – but they all click into gear pretty much straight away when it comes to opening or closing something. They’ve adapted amazingly and that has made the whole thing a little easier for me.” Cognisant of what unavoidably lies ahead, Róisín Foley is embracing the here and now. “People go through life so stressed about stuff that really doesn’t matter, but I actually feel blessed that I’ve been given an opportunity to enjoy myself while I can, and focus on the important things. So for now it’s all about family and making memories.”
Drinking tea for MND over the course of June is a small but helpful gesture to aid invaluable work. And it’s the least any of us can do for remarkable people like Róisín Foley.

To organise your ‘Drink Tea for MND’ event during the month of June, email fundraising@imnda.ie or freefone 1800-403-403 to receive a SuperValu sponsored tea pack. To make a €2 donation, text MND to 50300 (www.imnda.ie)