Home » Local News » With no 'piggy back Uni', Waterford IT 'will endure'

With no 'piggy back Uni', Waterford IT 'will endure' 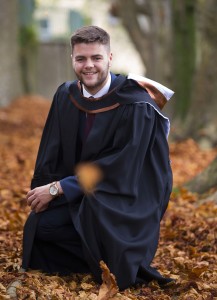 City & County Mayor Adam Wyse, who recently graduated from WIT with a Bachelor of Business (Hons). His Fianna Fáil colleague Eamon Quinlan, along with many others, including WIT President Willie Donnelly, has called for additional capital investment for the Institute. | Photo: Patrick Browne

Bounced cheques are likely to be avoided at Waterford Institute of Technology (WIT), ironically due it not being ‘piggy backed’ onto a pre-existing regional university, according to City & County Councillor Eamon Quinlan (FF).
Commenting on the Higher Education Authority’s (HEA) Financial Review on the Institutes of Technology, Cllr Quinlan praised WIT for “adopting a university stance despite operating on a reduced IT budget”.
“Unlike Limerick or Cork ITs, WIT doesn’t have a local university that it can be ‘piggy-backed’ onto in the event of any recommendation which suggests a major, future rationalising of the IT sector,” he said.
Cllr Quinlan added: “There’s an infrastructural deficit issue Waterford faces given that it doesn’t have an adjoining university that it can share facilities with, for example, and perhaps achieve some financial savings by virtue of sharing resources and facilities.
“But then if you flip the discussion, and go through the looking glass, so to speak, given that WIT remains a standalone third level institute in the region – with Carlow IT at the northernmost tip of the south east, as close to Dublin as it is to Waterford, essentially – and since there’s no university in either Waterford or the region, it’ s scarcely foreseeable to envisage this city’s future without WIT. In fact, you couldn’t possibly close WIT due to the absence of the university that we’re all longing for. And for me, that’s one of the key reasons why I feel there’s no nuclear button scenario at play when it comes to WIT’s future and its immediate to long-term objectives.”
The HEA Report also tellingly revealed that WIT “remains the most successful IOT in terms of research income and is very successful in attracting competitive EU funding. In 2014/15, their research grant income was €18.7m, or €38,698 per academic”.
Cllr Quinlan added: “That tells you something about the expertise which WIT has at its disposal – that’s a real badge of honour for (WIT President) Willie Donnelly and a real calling card for additional future investment from both State and commercial sources. Sure, the HEA Report certainly makes for tough reading on the whole, but we can draw enormous solace at WIT’s ability to attract funding to the level that it does and that it’s achieved this during such a massive economic downturn…
“The HEA Report shows that WIT has no capital development reserve. It needs a cash injection into its science programmes, its technology programmes, as well as in engineering and maths, all areas that the Institute is excelling at…and with additional monies, it could and well fare even better.
“WIT is a research and technology IT, and it’s very successful in attracting funding. It deserves to be considered in terms other than, potentially, as a going concern, and of course it would be preferable if the cash reserve that was in place up to only a few short years ago, was still intact. But that’s not the case and we are where we are.”
Reacting to the HEA Report, Willie Donnelly noted that WIT has “developed the undergraduate, postgraduate and research capability expected of a university. However, the Institute does not receive the equivalent core funding for research or the same grant per postgraduate as the universities…
“It is essential that the Institute is provided with capital investment in engineering and science buildings to sustain the project growth in advanced manufacturing, biopharma and ICT”.
Eamon Quinlan added: “WIT needs and deserves greater funding. And ensuring its future academic and funding levels reach the levels it clearly and wholeheartedly merits represents a ball we daren’t take our eyes off.”