Home » Local News » Women in Stem and The Numbers Game

Women in Stem and The Numbers Game

Regina Moran took to the rostrum at the WIT Arena on Thursday morning last and beat the drum for female Leaving Cert students to consider a career in Science, Technology, Engineering or Maths (STEM). The lack of young women in such lecture halls is something the Clonmel native is personally familiar with.
When she took her Certificate in Engineering at Waterford Regional Technical College (WRTC) in 1980, she was one of only five females sitting the course from a total intake of 45. Ms Moran, who is now Vice President of Transformation for Europe, the Middle East, India and Asia for tech giant Fujitsu, stated: “five of us was actually quite a big number at the time, believe it or not, back in those days”.
Sitting in a quiet meeting room at the WIT Arena before the Women In Technology event got underway in the main sports hall downstairs, Ms Moran said that Engineering “wouldn’t have been a natural choice, I suppose, for girls to choose a course like that back then but it was good to have a few other female colleagues in the class at the same time”. She continued: “The challenge for girls back then was that most secondary schools didn’t teach Physics or Honours Maths to girls so when you arrived on an Engineering course as I did, as a female student I was at a slight disadvantage as most boys on our course would have studied both those subjects up to Leaving Cert give such a good grounding for Engineering. So what I really like about Waterford Regional at the time was the personal interest that the lecturers took in each student and I was struggling a little bit at the start. But one of the lecturers kind of took me under his wing, helped me find the right books in the library and got me through the first few months when I could just as easily have concluded that the course just wasn’t for me. And that’s one of the big advantages of the ITs, still, in that there’s still a personal touch when it comes to lecturers.” 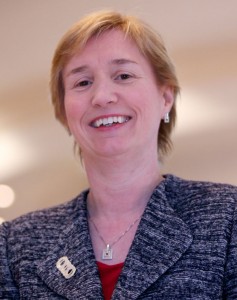 That she stayed the course literally has reap a fine career ward for Regina Moran, but 38 years later, the gender breakdown in terms of those taking STEM courses across the ITs and Universities remains far too male.
And that’s why the event held on Thursday last, coinciding as it did with International Women’s Day, was one Ms Moran clearly felt was worth travelling back to the South East for. “I think it’s disappointing that, all these years later, we are still struggling, and it’s not just in Ireland – I’ve spent time in the UK and the last number of years in Europe – and all across the continent, there’s a challenge to attract girls into the STEM subjects in the first instance, and then being a bit biased, into Engineering thereafter. And I think, maybe, that part of that is down to a lack of female role models (in both STEM and industry) and events like this at WIT is great at helping to buck that trend, as there will be a range of women on stage, telling their stories to young girls, and there is nothing better when it comes to advancing the call for more women in STEM than an event such as this.”
During her year as Engineers Ireland President in 2014, Ms Moran, “unashamedly went to a lot of girls’ schools and a lot of events that were populated by girls because they can check out very early, from the science subjects, as early as First Year – science is optional in a number of schools – and I feel it should be compulsory up to Junior Cert. But once you stop doing Science, then you can’t do any of the Science subjects for the Leaving Cert and that makes it very difficult to get into a STEM university course. So I feel that it’s early on – at Primary School level – that’s where we really need to engender that interest in young girls. As part of Engineers Week, I remember going to a primary school, a co-ed school, and it’s interesting, even at that very young age, to see the girls sitting back that little bit more from the experiments I performed, so I insisted that everybody in each group did something, to build a little circuit and so on, so I feel we need to take that lack of confidence into account, and bolster it as early as we can because if we can ‘intercept’ kids, so to speak, before they leave Primary School, we can help them make better choices both at Secondary level and beyond.” During her address to students, Ms Moran stated: “The only way we’re going to succeed is if the other 50 per cent of the population, by that I mean the females in this room, show up and start choosing these courses and help to solve these problems.”
Stressing the irreversible impact on technology in all of our lives, Regina Moran said lifelong learning is a concept which future generations, male and female, will have to embrace, “so think about the choices that you’re going to make because that’s the challenge for all of you, to protect the fragile world that we’re in.”
She concluded her address by reciting an old Japanese saying: “‘If you do not enter the tiger’s cave, you will not catch the cub’, and what that really means is that if you are not brave, you won’t get what you want.” Regina Moran took a brave step back in 1980, and she hopes today’s younger female generation will take a similarly brave step into the world of STEM, both at third level and beyond. Hers is a voice worth listening to.