Waterford Hospice is 30 years in existence this year. As work on the long awaited Palliative Care Unit on the grounds of UHW continues, four stalwarts of Waterford Hospice reflect on all that has been achieved to date.
SINCE its foundation in 1988, Waterford Hospice has provided a hugely important service to the people of Waterford City, County and South Kilkenny.
Expert care has been provided for patients approaching the end of their lives through the Hospice’s Specialist Palliative Care Home Care Team which operates under the guidance of a full-time Nurse Manager.For the majority of people, care in their own home is the most ideal environment for the provision of palliative care.This allows family members to spend more quality time with their loved one during their last days or hours.It also provides the patient themselves with more privacy and dignity. However, it isn’t always possible for everyone to die at home so the Hospice has been striving for many years to provide a specialised Palliative Care Unit on the grounds of University Hospital Waterford (UHW). 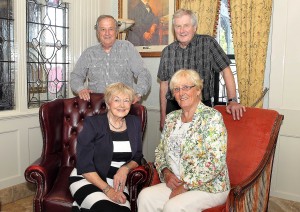 A great deal of progress is currently being made on this building as anyone who has recently visited or passed UHW will know. When completed, there will be 20 single rooms in the unit which will be slightly bigger than regular hospital rooms and there will be sufficient room for family members to be with their loved one. The unit will open out onto a garden area, and there will also be areas where people can take some time out during what is an incredibly difficult time. The unit will also provide day services and will provide a new base for Hospice’s Home Care team.More than €4.5m has already been raised by members of the public for this building. The novel ‘Buy A Brick’ campaign is the latest initiative which it’s hoped will propel Waterford Hospice towards its €6m fundraising target for the Palliative Care Unit.The campaign was aptly launched by Déise hurling star Michael ‘Brick’ Walsh recently.
Throughout the campaign to fundraise for the Palliative Care Unit (and throughout the past 30 years) a number of stalwarts of Waterford Hospice have been to the forefront of all fundraising activity and have selflessly given countless hours of their time to the charity. These well-known and respected figures have carried out Trojan work and it’s thanks to their efforts that the Palliative Care Unit has now reached such an advanced stage. Marie Cummins is a household name throughout Waterford and South Kilkenny and her enthusiasm and indomitable spirit are well-known to all.
She has deservedly accumulated many local and national accolades in acknowledgment of her contributions to Waterford Hospice.

An artist's impression of the new Primary Care Unit at UHW (the Dunmore Wing). The project consists of three floors of wards above a floor for Palliative Care Day services and a dedicated 20 Bed Palliative Care (Hospice) ward.

Marie’s involvement began through Denise Hughes who was the first Waterford Hospice nurse. At the time, Marie, who was heavily involved in set dancing and the ICA, decided to set about fundraising for Waterford Hospice. Alan O’Neill suggested that she should try to establish a Hospice support group in Slieverue which she duly did. Marie went on to help set-up similar groups throughout Waterford and South Kilkenny and has been central to fundraising campaigns for Waterford Hospice down through the years. “The support from the very start was unbelievable. You only had to mention the Hospice. We never had any bother getting money,” she said. Chances are that everyone throughout Waterford and South Kilkenny has contributed to Waterford Hospice at some stage during the past 30 years. A phenomenal amount of fundraisers have been held including fashion shows, table quizzes, coffee mornings and golf events.
Some well-known standalone events have included the popular Ball Run, the Midsummer’s Ball at The Woodlands Hotel, the Walk to Remember, and the barbeque at Gardenmorris in Kill, to name a few.Waterford Hospice has benefitted from many generous donations from local factories and businesses and has also received funds from major local events such as the Sean Kelly Tour of Waterford, the Waterford Truck and Motor Show and the Mayor’s Ball. The Munster Express was also delighted to be associated with Waterford Hospice for many years through our annual Fun Run which was held in conjunction with Caulfield’s SuperValu and later Hartley People. Waterford Rotary Club has raised over half a million euro for Waterford Hospice through fundraisers such as the poignant Christmas Memorial Tree which has become an integral part of Christmas in Waterford. The kindness of strangers towards Waterford Hospice has been very much evident throughout the past 30 years.