Members of the Portlaw Village Wheelers will embark on the Four Munster Airports Challenge this month in aid of local charity Touching Hearts. (header across right page)
A GROUP of 25 enthusiastic cyclists will embark on a mammoth challenge this month. The Four Munster Airports Challenge is a novel initiative organised by the Portlaw Village Wheelers which takes place from April 20th to 22nd. The challenge begins on Friday April 20th at Waterford Airport, with the first leg consisting of a 162km trip to Shannon Airport. On Saturday April 21st, the participants will travel from Bunratty to Macroom via Farranfore Airport in County Kerry covering a whopping distance of 172km. On the final day, Sunday April 22nd, the group will travel from Macroom to Cork Airport and then begin their journey home to Portlaw. 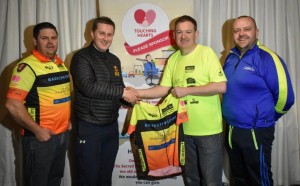 In what is certainly a real test of character and endurance, the participants will clock up an impressive 500km over the three days.Each cyclist will cover their own expenses for accommodation and food etc. so all money raised will go to this year’s chosen charity. The Portlaw Village Wheelers group formed four years ago and has gone from strength to strength ever since. Members arrange regular cycles each week in both small and large groups and have participated in numerous charity events.
The enthusiastic cyclists support one other and operate a WhatsApp group which allows them to keep in constant contact.
Recently, the Wheelers were out in force at the 50k Mental Health & Suicide Awareness Cycle on Easter Sunday organised by Cllr Liam Brazil which travelled through Mid County Waterford. Now, the participating group of 25 are firmly focused on the Four Munster Airports Challenge which is set to be an epic adventure.
Thanks to their custom made and eye catching jerseys, which display the names and logos of their sponsors, the cyclists will certainly make an impact on the roads of Munster throughout the three day event. The family members of the cyclists have also sourced brightly coloured t-shirts which display the details of event sponsors and which they will proudly wear throughout the weekend.
Last year, the cycle was in aid of Our Lady’s Children’s Hospital, Crumlin and, for 2018, the chosen charity is Touching Hearts which was established to support the building of a new Sacred Heart Centre in Waterford for children with physical and learning disabilities. The current Sacred Heart Centre on Lady Lane, while offering a great service, is not adequately equipped to deal with all of the children it caters for.“The centre is doing a fantastic job in enabling children to reach their full potential,” said Dermot Dooley whose son Darragh attends the centre.“All that is needed now is a purpose-built building to ensure that the most vulnerable children can avail of the expertise in a building that is equipped to meet their needs.” 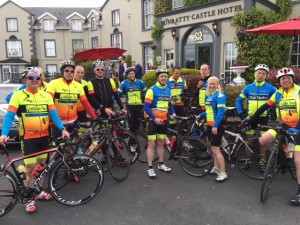 Dermot is a member of the Touching Hearts committee which has been working tirelessly to fundraise for the new facility.
The Sacred Heart Centre was established in 1974 and was originally under the auspices of the Irish Sisters of Charity, but was taken over by the HSE in 2005.
It supports families of children who have varying degrees of physical and learning disabilities and is assisted by the Friends & Family Association which was set up in 2006.
The main function of the Sacred Heart Centre is to empower children with a broad range of intellectual and/or physical challenges and their families to develop to their full potential in a safe and nurturing environment. This is achieved through the provision of an Individual Family Service Plan for children attending the Main Early Intervention Service.
However, the lack of space impacts on the provision of services and multidisciplinary team work. For example, one small therapy room doubles up as a toddler and play group room which means equipment has to be moved to other areas which is very time consuming. The building also lacks appropriate facilities for hosting parent and staff training.Further limitations include the amount of staff that can be employed and the capacity to take in new referrals for children needing early intervention.
Access to the centre is also difficult as there is only one small carpark for families, staff and buses. The centre also lacks quality equipment seen in other early intervention centres and the outside space where the children play is also insufficient for their needs.
“I knew we had to do something,” said Dermot, when explaining the reason behind embarking on the fundraising campaign.