The hugely successful and popular Run and Walk for Life in aid of the Solas Cancer Support Centre is celebrating 10 years and takes place in the city this Sunday October 14th.
THIS year marks the 10th anniversary of the Run and Walk for Life which will take place this Sunday 14th October.
Runners and walkers will take to the streets of Waterford to raise money for the Solas Cancer Support Centre which provides support services to people in the South-East directly affected by cancer, as well as their families and carers.Datapac and Beat 102 103 have teamed up with the Solas Centre as event partners again this year.
Since its inception, the event, which is the largest fundraising event on the Solas Centre calendar, has raised a mammoth amount for this hugely important support service for the South-East.
In 2017, over 2,600 people took part in the Run and Walk for Life, with participants starting along the Quay and finishing in the People’s Park having completed the challenging 10 mile run or the highly enjoyable 5 mile family walk. 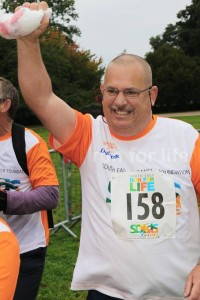 Jim Power, member of the men’s support group, pictured after completing his first Run and Walk for Life.

This year there will be a new 10k route which participants can either walk or run.In its early years, the event was central to the fundraising activities which took place to help make the construction of the Solas Centre a reality. The Centre opened its doors seven years ago and remains entirely funded by donations and fundraising activities such as the Run and Walk for Life.Services are free and open to people in the South-East that are directly affected by cancer, their families and carers. All of the participants who will take to the streets this Sunday have their own stories and their own personal reasons for participating in the event. Jim Power from Ard na Greine is preparing to participate once again this year in what will be his seventh Run and Walk for Life. His sons Jason and Aaron, daughter Ellen and wife Patricia have also all participated in the event as well. Now, many of Jim’s other relatives and friends also participate.
Jim recalls being on the Ring Road with Patricia cheering Jason and Aaron on as they participated in the event for the first time– not knowing that in four months’ time he himself would be coming to terms with a cancer diagnosis and would end up visiting the Solas Centre for treatment and help.
“I’m in a good place thanks to the Solas Centre. Only for the Solas Centre God knows where I’d be” he said. “The people of Waterford and the South-East have built the Solas Centre and the amount of people passing through the doors is phenomenal.” Jim was just after receiving a bone marrow transplant when he first participated in the Run and Walk for Life. “I walked the 10 miles and when I crossed the line I was so emotional,” he said. Participating in the event has now become a much loved family tradition for the Powers. “On the morning itself you get up feeling good and looking forward to it,” explained Jim. The family enjoy breakfast together and “a bit of banter” before preparing to head off to the starting line.“It’s a real family event. There’s something special about it especially when you arrive at the start and see the sea of orange t-shirts,” he said.

He is encouraging everyone to get out and participate in the Run and Walk for Life and says there is a great sense of satisfaction. “It’s a great day and it doesn’t matter how long it takes you to do it,” he said. Jim still attends the Solas Centre and is heavily involved with the men’s support group which meets every Tuesday morning. “We talk about everything, not just cancer,” he explained.
The group have visited the museums in the city, have undertaken a number of different walks, engaged in a spot of fishing, enjoyed afternoon tea and are currently striving to organise an outing to Dublin. The group recently opened their impressive new garden which featured on RTÉ’s ‘Nationwide’ last week. Jim would love to see more men getting involved with the group.
“If you have cancer, the Solas Centre is here so come along and get help. Don’t just sit at home as that will drive you mad,” he said. Volunteerism is the backbone of the Solas Centre and there are many different volunteers involved at various levels. The Solas Centre is supported by over 70 volunteers, 25 counsellors and therapists, six community employment scheme workers and four staff members (two full-time and two part-time).
Volunteer Collette Quinlan has been proudly involved with the organisation for around 15 years. Initially, she started as a ‘meet and greet’ volunteer and then became involved in fundraising. She was part of the original Capital Development Committee which organised specific events such as the popular Ladies Lunch – an event which still continues today. Now, Collette is back doing ‘meet and greet’ each Monday morning and welcomes clients as they arrive at the Centre and can have a chat and a cuppa with them before they go for a treatment.
She says clients like seeing a familiar face when they arrive at the Centre. Collette also says she is often approached outside of the Solas Centre by people who may be coming to terms with a cancer diagnosis. “When people know you’re involved, they come up to you. There is always someone affected by cancer. You can help make an appointment for them or put them in touch with the Client Services Coordinator,” she explained.
Collette says this sense of familiarity is important. “When a person knows someone involved, it’s easier to take the next step.” Along with Fionnuala O’Shea, Collette is also involved in the ‘Strides for Life’ programme which is run in conjunction with the Irish Cancer Society. Through this 15 week programme, the aim is to gradually build up the fitness of people who have gone through chemotherapy and radiotherapy. The group meets on Thursday mornings and travel to different places such as Tramore, Annestown, and Dunmore East. Collette says participants find the programme very beneficial and says there is an important social aspect as the group meet for a cuppa afterwards.She says there is great feedback from participants and great self-satisfaction when she sees how much people get from the programme.