A garden oasis in the heart of Waterford

Men’s Shed members are coming together to create a garden space in Waterford’s Cultural Quarter. Included are members of the Community Men’s Shed which aims to help refugees integrate into Waterford life.
Waterford’s O’Connell Street is in the process of being transformed thanks to the ongoing plans for the development of the city’s Cultural Quarter. Now, an exciting project involving members of the Men’s Shed movement in Waterford is aiming to create a garden oasis at one of the street’s most prominent locations. Garter Lane Gallery, located further down O’Connell Street from the Garter Lane Theatre, is a well-known landmark which is easily distinguishable thanks to its distinctive set of outside stairs.
The building on the opposite side of the street is home to the Men’s Development Network.
Sile Penkert, Garter Lane’s Executive Director, was eager to contact this organisation with a view to working collaboratively on a project. 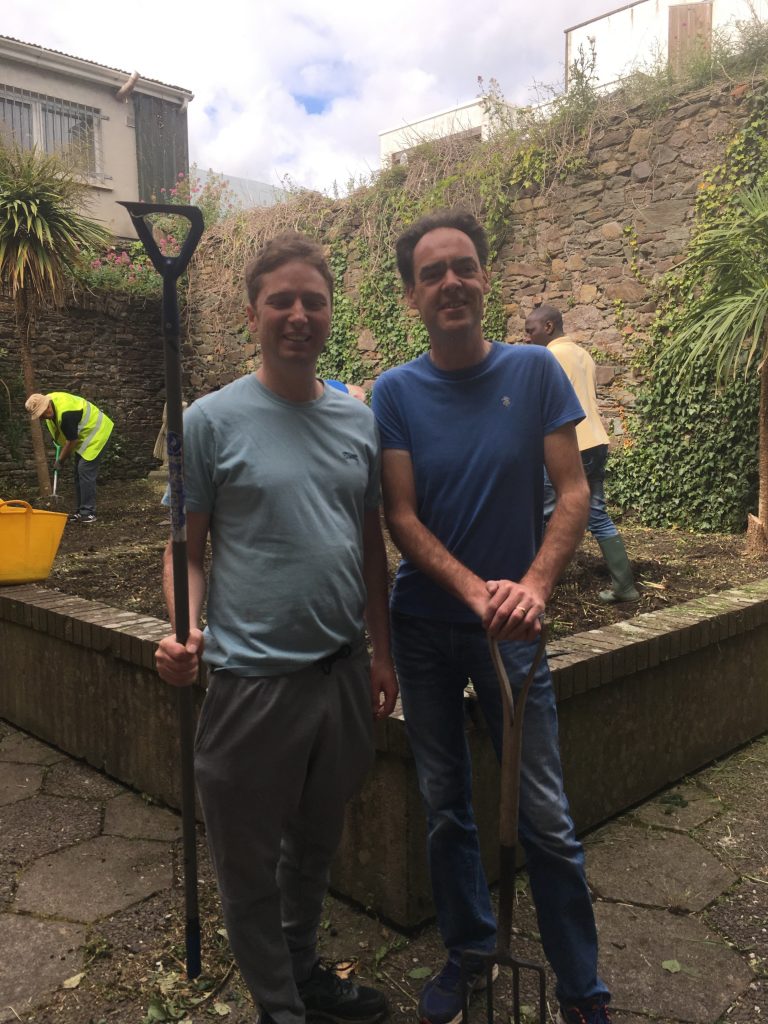 Contact was initiated by Derek Corcoran, Garter Lane’s Community Employment Supervisor, who explained their eagerness to collaborate given that Garter Lane and the Men’s Development Network both share the same neighbourhood and street and inhabit what is now commonly referred to as the ‘Cultural Quarter’. “We also share a lot of the same values and principles,” explained Derek. “All this sharing must be enough proof to conclude that we have a lot in common”.Inspiration Derek explained that the Adult Education Centre’s learning showcase had recently taken place and, as part of that event, adult learners had displayed their achievements including the impressive work of Philip Cullen’s short films with “The Red Lead Group”. “These are a group of men who have acquired brain injuries. They visit the theatre weekly to produce films and screened two that morning,” Derek outlined.
Inspired by this event, Derek aimed to discover more about the supports available locally for men and was delighted to learn that activities around men’s health are very much alive and well. As both Garter Lane and the Men’s Development Network have so much in common, Derek believed that many opportunities existed. “We can help each other by sharing more than what’s passing our windows but by working a little closer together,” he said. “The proposition put forward was around bringing some of the very exciting art forms on offer to a wider men’s audience with the expectation of making ‘better lives for men, better lives for all’.” Michael Hennessy, National Men’s Health Training Coordinator, responded with a call and they quickly met up along with Lorcan Brennan, National Men’s Health Coordinator.
“We had no real agenda but knew there were plenty of opportunities to make something happen. We chatted about the various projects both organisations were working on,” explained Derek.
Collaboration
In March, he invited the lads to John O’Connor’s play “Ireland’s Call”. Since then, Garter Lane has hosted the Men’s Health Showcase which launched the National Men’s Health Week, and which was a great success.“Hungry to keep the momentum going, Michael got in touch with the Men’s Sheds around the possibility of saving ‘Our Little Garden’ in O’Connell Street from the rapidly growing vegetation,” explained Derek.“Thankfully Andrew Power offered his help by rallying a few of the lads from the Men’s Sheds to a meeting in the Children’s Room in Garter Lane. Shedders from across Waterford gathered for a brain storming session and as we all looked out the window we came up with a bunch of brilliant ideas. We all walked out to take a look and decided the first thing we would do would be to clear the garden. Willie Moore from the Deise Men’s Shed had a contact in Oxigen Environmental and quickly arranged for a green skip to be delivered – thanks to Oxigen and Willie for their help on this.” 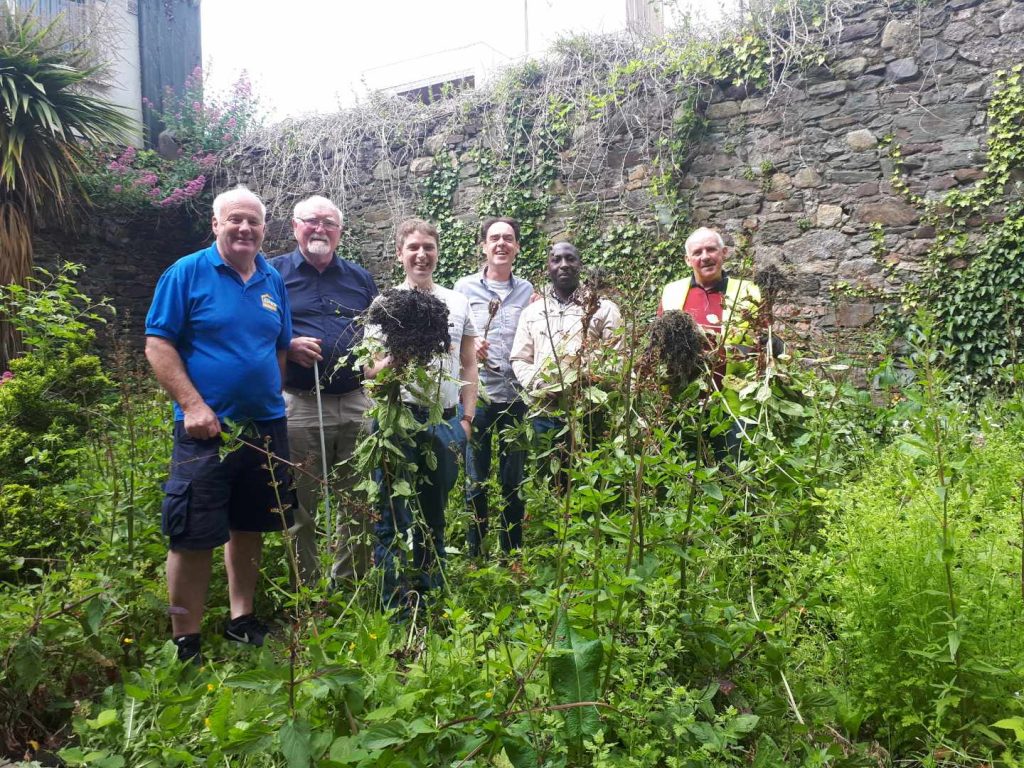 Group pictured amongst the overgrown vegetation before work began at the site.

Derek is keen that the Men’s Shed can “leave a legacy” at Garter Lane.He explained that some of the ideas from the members in the Men’s Sheds involve creating a little green space to engage children in the growing of plants and vegetables, the possibility of inviting the various communities around the Cultural Quarter to grow plants, sculpt wooden carvings on the old stone walls, build furniture, bird tables, bug hotels etc. “The list is endless,” he says.“At the very least we will be facilitating the many adults and children alike that use Garter Lane Studios on a daily basis. This beautiful Georgian building, in the heart of the Cultural Quarter, will have a safe place where our resident artists, dancers, Little Red Kettle and numerous workshop groups can take a break, have their lunch or just catch some quite time on a sunny day. This is such a valuable amenity for the community in the area where the nearest blade of public grass is on Ballybricken, a kilometre away if you have to drive.”
Derek Corcoran says they were truly overwhelmed by the response from the Men’s Sheds in clearing this “wonderful little amenity”.He is impressed by the enthusiasm on display and says there is a “feel good atmosphere” while the working is taking place. “It was great to see such enthusiasm for this little space in the centre of Waterford City,” he said. “The lads from the Men’s Sheds are an inspiration to the community.” He says having such a space on O’Connell Street and within the Cultural Quarter will benefit the people who use the building.Although it’s not a public building, Derek points out that it is used by a variety of different groups and age groups for various activities.
Benefits
Andrew Power is Co-ordinator for Waterford Men’s Sheds. He says such a project has many benefits as the men involved enjoy “a bit of banter and craic” while engaging in new experiences which encourage their “creative juices”. “This is a great opportunity for Mens Sheds to reach out into the community and do a project like this,” he said.“The lads are more than happy to come down and help out. This is a perfect example of how we can reach out and make a difference. It’s great to see other organisations benefitting from Men’s Sheds – that’s the spirt of the Men’s Sheds movement.”
Andrew says the movement is growing from strength to strength nationally and is very strong in Waterford.
He explained that there are ongoing plans to establish further Sheds in both Waterford city and county.
“There are over 400 Sheds nationally which is incredible,” he says. “it’s an exciting time for the movement across Waterford.” Various Men’s Sheds groups from throughout the city and county were represented at the recent gathering at Garter Lane. One of the Sheds represented was the new Community Men’s Shed which is located at Coffee House Lane adjacent to the Viking House Direct Provision Centre. The new group, which is supported by St Vincent De Paul, aims to help refugees play their full part in Waterford society.
Integration
“In 2010, 32 per cent of adult refugees in Ireland had found employment. Five years later that number had risen by a mere 5 per cent,” explained Frank Kennedy who is part of the Community Men’s Shed management team. “Recognising the reality that new community members face greater difficulties in entering the Irish job market, we decided to set up a Men’s Shed to overcome these challenges.”
Frank outlined how the Community Men’s Shed became a reality. “With generous assistance from the Society of St Vincent de Paul and Medite Smartply we were able to kit out our woodwork shop with a range of professional equipment such as bench saws, mitre saw, jig saw, planer-thicknesser and drills,” he explained.
“Participation in the Men’s Shed will help refugee men build their self-confidence through learning to construct items such as kindling, bird tables, kennels and flower planters in a supportive English language environment. These items will be offered for sale from our premises in Coffee House Lane and all profits will go towards providing career-based training such as Computer Programming, Multimedia skills, Microsoft Office skills, Payroll & Bookkeeping, Barista training, Forklift driving and Safe Pass Certification.”
The Community Men’s Shed also offers a range of day and evening hand craft/hobby training courses open to the public.
These include Mirror/Glass Etching, Stain Glass Art, Basket Weaving, Candle Making, Antique Furniture Restoration, Guitar, Furniture Upcycling, Paint Club and Art Based Meditation.
Frank says all associated with the Community Men’s Shed, which is open on Wednesdays and Thursdays, would welcome any support from the wider public He is encouraging people to visit the Shed and chat with the members over a cup of coffee; to consider purchasing some of their products; to share carpentry skills with the participants; or to join one of the hand craft courses.
Undoubtedly, the Men’s Shed movement is having a hugely positive impact on life in Waterford and the creation of the Garter Lane garden will provide a valuable asset for people to enjoy.
Anyone interested in joining a Shed or getting information on the Irish Men’s Sheds movement can visit http://menssheds.ie or contact 01 891 6150.