Paddy Houlihan from Ballybeg is maintaining and promoting an almost forgotten site of significant historic interest – the Knights Templar Graveyard, Kilbarry.
AN IMPORTANT piece of Waterford’s history and heritage is being preserved and promoted thanks to the Trojan efforts of one local man and his granddaughter. 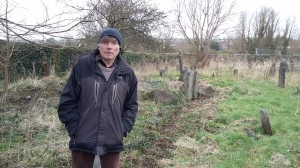 In a fantastic display of community spirit and pride of place, Paddy Houlihan from Ballybeg Square embarked on a project to improve the condition of the Knights Templar Graveyard in Kilbarry some years ago.
Paddy had become increasingly concerned for the condition of the graveyard which is located near Lacken Road Business Park and Templars Hall.
The Knights Templar were an international military order set up to protect pilgrims travelling to the Holy Land.
They arrived in Ireland in the late 1100s after the Norman invasion of 1169-71 and the witnessing of an Irish charter by Matthew the Templar in 1177.
They fell out of favour with the King of France in 1307, were persecuted on the continent and closed down in England and Ireland.
Their estates were handed over to their rivals, the Knights Hospitaller, but Kilbarry was one of three preceptories in Ireland retained for the Templars for the remainder of their lives.
The remains of the church of St Barry are located within the Kilbarry Knights Templar Graveyard.
Beside the church, a row of mortared stone buildings with slate roofs were located along with a row of large wooden buildings, probably barns. 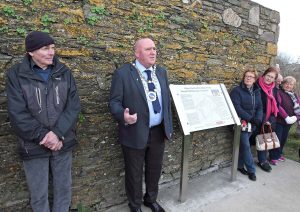 Cllr John Hearne pictured alongside Paddy when speaking at the unveiling of the new sign outside the graveyard during his tenure as Metropolitan Mayor last year. Photo: Noel Browne.

Records show that the church, which was located on a slope overlooking a tidal marsh that extended to the River Suir, was in good repair until 1615 when it was still in use and serving the parish.
The earliest headstone in the graveyard dates back to 1598 and the latest is dated 1856.
The graveyard lay more or less idle since the mid-1800s and, in the modern era, was believed by many to have been a famine graveyard.
Paddy Houlihan says many local people, including himself and his family, have many fond memories of playing in the area. He recalls the graveyard being a favourite location in which to explore with his brothers and sisters when growing up. “Everybody around this side of the city played in the area,” he explained.
In recent years, Paddy became concerned because of the huge growths of ivy throughout the graveyard, the high grass growths, and the many overhanging trees.
Along with his granddaughter Katie (his trusted sidekick and ‘Project Manager’), they spent countless hours engaging in efforts to clean-up the graveyard. More than 40 headstones/tombstones are located in the graveyard and, during the duo’s work, five tombstones were uncovered which had been hidden in the undergrowth. All of the names on the stones have now been recorded, and the graveyard’s condition has improved immensely.