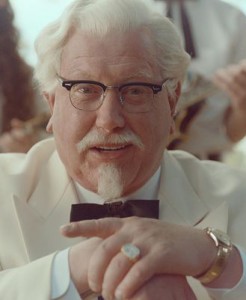 After nearly 20 years in the wilderness, Kentucky Fried Chicken is reintroducing that most southern of southern gentlemen, Colonel Sanders.
The white suited, elderly man was based on the actual founder of the fried chicken chain but then it was considered that he was too old fashioned for advertisements and he was retired.
Well, guess what, people like the ring of ‘old fashion’ when it comes to food so Colonel Sanders is being brought back.
I’ve always maintained that two of the biggest game changers in this country have been the introduction of the Honda 50 and the Snack Box. Welcome back suh!