Wednesday 28th February is World Rare Disease Day. Emily Garcia Ferguson, daughter of Ruth Ferguson from Grange Park Road, Waterford and now living in Murcia, Spain, was diagnosed with Wolf-Hirschhorn Syndrome in 2008 at three weeks old.
THIS Wednesday February 28th marks World Rare Disease Day. A condition is considered rare if it affects less than one in 2,000 people and there are approximately 7,000 rare diseases in existence today affecting an estimated 30 million people in Europe and 300 million worldwide.
The main objective of Rare Disease Day is to raise awareness amongst the general public and decision-makers about rare diseases and their impact on patients’ lives.
Events to mark the day are taking place worldwide, including here in Ireland. Over the last 10 years, Rare Disease Day has become iconic as the global campaign for raising awareness of rare diseases. Although it’s something which many people may not give much thought to, it’s estimated that one in 20 people will live with a rare disease at some point in their life. 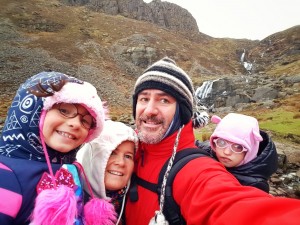 Emily and her family pictured during a visit to the Mahon Falls.

Wolf-Hirschhorn Syndrome is one such rare disease which affects one in 50,000. Emily Garcia Ferguson, who is now aged nine, was diagnosed with Wolf-Hirschhorn Syndrome in Murcia, Spain in 2008 when she was three weeks old.“Emily isn’t quite one in a million but she IS one in 50,000!” says her proud mother Ruth.
Ruth, who hails from Grange Park Road in Waterford, has lived in Spain for over 20 years.She attended Ursuline Secondary School in Waterford and graduated from University College Cork (UCC) with a BA in Spanish and French.She planned on spending a year in Spain and a year in France after finishing college in order to perfect her languages.However, love intervened as she met her future husband shortly after arriving in Spain.She married Samuel Garcia Salcedo in Killarney in 2002.
Ruth says it was very difficult when Emily was first diagnosed with Wolf-Hirschhorn Syndrome as there wasn’t much information available on the rare condition.
“Emily was the first patient to be diagnosed with this extremely rare genetic condition in Murcia and, at the time, there were no available records of any other cases existing in Spain,” she explained.
“However, through social media things have changed a lot since then and parents can now find other existing cases with less difficulty.”
Little by little, the family found more families in Spain and, in 2010, the Spanish Wolf-Hirschhorn Association (AESWH) was formed.
“There are now over 50 known cases in Spain. Official groups exist in the UK and Ireland, USA, Italy, Australia and recently in Argentina. Other countries have Wolf-Hirschhorn Syndrome groups and there are also groups on Facebook where families from around the world can look for advice or share the milestones their loved ones achieve.” However, there is still a lack of knowledge amongst the wider public in relation to Wolf-Hirschhorn Syndrome according to Ruth.
“So little is known of this rare disorder and, nine years later, we have still never come across a medical professional or therapist who has heard of this condition,” she explained.“However, as groups are coming together and information is being shared, so too are studies and investigations taking place.”
Wolf-Hirschhorn Syndrome is a deletion on the short arm of chromosome 4. 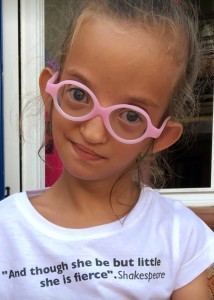 This missing genetic material results in severe developmental delays, a characteristic facial appearance, growth delays, epilepsy and may include a variety of other birth defects. “The effect on Wolf-Hirschhorn Syndrome children and adults varies widely,” explained Ruth.“Some can walk, talk and assist in their daily care while others are non-verbal and require constant care. The medical involvement also varies from near normal to severe. However, a common trait seems to be that they are happy, loving individuals.”This is something which certainly applies to Emily.At nine years old, Emily weighs 13.5kg (the weight of a two year old) and is 105cm tall (the height of a four year old). She is neurologically delayed, has many health issues, epilepsy and is non-verbal.
However, despite of all these obstacles Emily is thriving within her limits.
“Despite being severely neurologically challenged, Emily understands both English and Spanish. She is non-verbal but communicates through her communication device or through sign language and, despite her tiny size and low muscle tone,she has been walking since age four,” explained Ruth.
“She is such a happy girl and a social butterfly….waving and blowing kisses to every person we pass with a smile from ear to ear.”
Emily is based in a special education class but, because of her strong social skills, spends most of the day in class with typically developing kids for the non-academic subjects.
“We are SO lucky to have been able to find a school willing to focus on her abilities and not her disabilities,” said Ruth.
“The Spanish health system is also wonderful and Emily has a paediatric specialist for every problem she faces with check-ups every six to 12 months in every department.”
In 2014, Emily’s story first featured in The Munster Express following her visit to the Zarzuela Palace in Madrid which is the residence King Felipe VI and Queen Letizia and their family.
On Monday February 10th of that year, five families, all members of the Spanish Wolf Hirschhorn Association, had an audience in the Spanish capital with Queen Letizia (who was then the Princess of Asturias).
They were accompanied by two geneticists, a neurologist, two scientists and an occupational therapist.
The purpose of the meeting was to raise awareness of Wolf-Hirschhorn Syndrome and to highlight the ongoing work which is taking place into researching the disorder.
The group were with Queen Letizia for around an hour andeveryone was delighted that she showed great interest in the investigations, genetic and neurological, taking place in Spain.
In October of last year, the AESWH (Asociación Española delSíndrome de Wolf-Hirschhorn) held an international congress in Madrid where medical professionals from Spain, America, France and Italy presented, shared and discussed their latest and current studies and investigations on Wolf-Hirschhorn Syndrome.
The Spanish Wolf-Hirschhorn Syndrome families were present also and Damien Douglas from Dublin gave a presentation on living with twins with Wolf-Hirschhorn Syndrome.
“There are about 15 cases of Wolf-Hirschhorn Syndrome in Ireland, but none that are known of in Waterford,” explained Ruth.
Dublin is home to Una and Ailis, who are 22 year old twins with Wolf-Hirschhorn Syndrome, and there is only one other set of twins with Wolf-Hirschhorn Syndrome known in the world.
Liam and Kate Douglas, uncle and aunt to Una and Ailis, have organised fundraisers in The Vintage Tea Rooms in Dungarvan for the last three summers, raising over €3,000 for the UK/Irish group and raising awareness of this extremely rare condition.
While there are supports available, living with Wolf-Hirschhorn Syndrome obviously remains a challenge for Emily and her family.
“Things aren’t always easy for Emily and her medical issues and tiny size compare in no way to a typically developing nine year old,” said Ruth.
“However, she is bursting with happiness and personality and is unique in every way. As Dr. Seuss says “why fit in when you were born to stand out?”
Ruth said in the 2014 Munster Expressinterview that another favourite quote of the family’s is“Don’t tell me the sky is the limit when I know that there are footsteps on the moon!”
They say this quote is particularly apt as it describes Emily so well.
“Emily has proved so many professionals wrong and never ceases to keep surprising us with new milestones even if they are few and far between,” said Ruth.
In particular, Emily’s younger sister Alana has played a significant role in her progress.
The family travel to Waterford regularly and enjoyed catching up with relatives and friends and visiting different parts of the Déise during their trip last Christmas.
Emily’s story is an inspiration to all and, with the support of such a loving and caring family by her side, she is sure to continue to meet and exceed many milestones along her remarkable journey.
Further information on Wolf-Hirschhorn Syndrome is available on a number of websites including www.whs4pminus.co.uk, www.wolfhirschhorn.com, and www.4p-supportgroup.org along with various Facebook groups.
For more information on Rare Disease Day visit www.rarediseaseday.org