A spooky coincidence reveals the poignant past

Recently, I was speaking to an old friend who told me a story about his late father who was a musician and the leader of an old style, sit-down orchestra that was very popular in the 1950s and early 1960s.While my friend’s father was still relatively a young man he took ill and died on stage during a gig at the Collins Hall in Clonmel. By co-incidence, the town was where his wife had been born and reared. 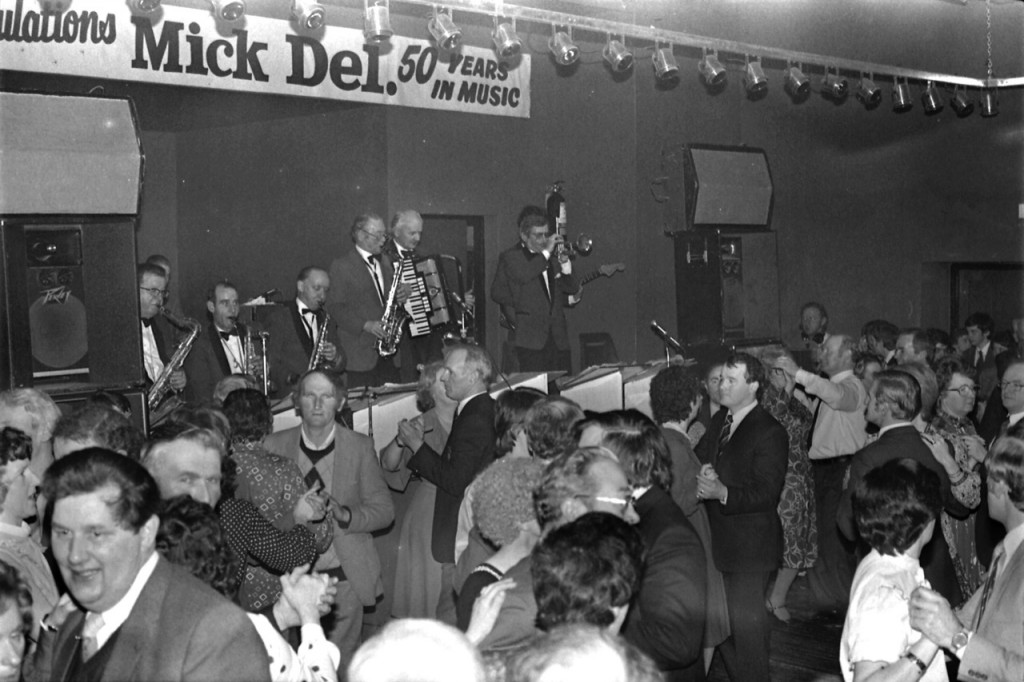 The famous Mick Delahunty playing in The Collins Hall, Clonmel in 1983. | Photo: Courtesy of the Donal Wylde Archive

Fast forward more than forty years and my friend’s mother, living in Carrick-on-Suir, sensed she was nearing the end of her life so she asked him to take her to Clonmel so she could visit all her old haunts and some of her friends who still lived there.The visit was a success and they decided that, before driving home, they would have a meal in the town centre. They parked in an old yard where the end wall was festooned with posters about all sorts of meetings, dances and concerts. My friend noticed that, over the years, poster had been pasted on poster and there was a paper clump of nearly six inches almost falling off the wall.

They had their meal and his mother enjoyed a little drink afterwards but, while they were in the restaurant, the heavens opened and there was a torrential downpour that lasted over half an hour. The rain had eased off as they made their way back to their car where they found that the downpour had finally taken down the accumulated weight of posters. The original wall was revealed and there, staring my friend and his mother in their faces, was a poster from all those years ago advertising the very dance in the local ballroom where my friend’s father had collapsed and died. He was somewhat freaked out at the coincidence but his mother didn’t turn a hair. She just smiled and said she didn’t think it would be too long before they were together again. She was correct and, I promise, this is a true story.

The musician was saxophonist, Pete Coady of the Pete Coady Orchestra from Carrick-on-Suir and his wife was Mrs Catherine Coady. Thank you to Pete’s son, Bing Coady and his wife, Mairead, for allowing me to tell this amazing story.