Home » Opinion » Express View » A Tough Time on the Farm

A Tough Time on the Farm

Farmers have been on tenterhooks these past few weeks, waiting for Spring to finally arrive. Even after a relatively dry week, much of the farmland across the region is still too heavy for ploughs and other heavy machinery.
Some enthusiastic farmers have been caught ought by moving too early, which has led to some getting machinery bogged down.
Other farmers who have brought cows and cattle onto paddocks, given the soft ground, have, through a combination of optimism and desperation, created underfoot quagmires. 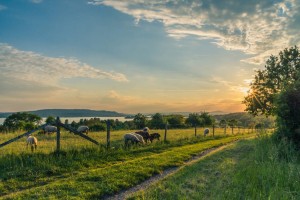 This has been a remarkable winter in terms of its length, between heavy rain, two bouts of snowfall and subsequent saturation of tens of thousands of acres of land.
While soil temperatures and growth levels are expected to further improve this week, it nonetheless remains a deeply worrying time for beef and cattle farmers given the lack of growth throughout late February and the whole of March.
It’s unfortunate that we have had such a turn of events in terms of the weather, and there’s no ‘silver bullet’ solution that stakeholders have been in a position to deploy.
Extended credit terms from banks and other financial institutions may well be required. Adding in the contention that some farmers who have over-stocked since the elimination of milk quotas may now need to sell animals just to make ends meet looks likely.
The lack of ‘rainy day’ funds, to pardon the pun, has led to many unable to purchase feed at a time of year they’ve rarely, if ever, have had livestock indoors.
Perhaps better planning for the future is a lesson that everyone in the industry will need to take on board when it comes to less dependable weather and spring growth, though it remains to be seen if this winter is a pattern which will be repeated over the next decade.
However, if the Gulf stream moves, as it did, for another period beyond the next winter, then questions about a shift in the traditional Irish climate will become pervasive, forcing farmers to plan accordingly, and also taking herd numbers into account.
Implementing panic measures towards the end of March is in no-one’s best interest. One feels a potential fodder shortage ought to have been factored into account given the impact of Storms Ophelia and Emma – and such an approach was raised from opposition benches in the Dáil prior to Christmas.
The Government did eventually react when it came to supplying fodder in, as did the major supplies, and that work is ongoing. Questions about why so much fodder went from the south of the country to places such as Donegal, where they’ve had poor weather since late August, without too much thought being given to potential problems in other regions, remain on the table.
Better stock levels and more forbearance will be needed going forward to get a more accurate picture nationwide when it comes to planning, and this where the Department of Agriculture’s large staff will have to diligently devise future counter measures.
Meanwhile, with the Brexit challenge chugging down the track, news that Irish beef can be sold to China represents a major break through which might in the medium term lessen the dependence on the British market.
We can’t predict the next few winters’ weather, but we can certainly champion our farm produce to new and emerging markets with vigour and confidence.