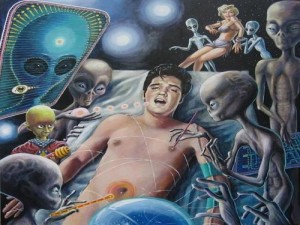 Bet you didn’t know that Elvis Presley and Marilyn Monroe were once abducted and examined by aliens!

Regular readers will know that, in the past, I have quoted from the excellent science columns in The Irish Times written by William Reville, an Emeritus Professor of Biochemistry at UCC.
Last week, Professor Reville discussed a recent article in ‘The Psychologist’ an academic publication mainly devoted to psychological considerations of human interactions with outer space.
Most readers will know of Steven Spielberg’s blockbuster movie, ‘Close Encounters of the Third Kind’, but may not know that encounters with aliens are grouped into four categories: close encounters of the first, second, third and fourth kind.
A close encounter of the first kind is a simple sighting of an unidentified flying object (UFO) with no other supporting evidence. More than 95 per cent of UFO sightings are later explained as misidentified weather balloons, aircraft and so on. There is no reason to believe that the tiny percentage of sightings that cannot be identified are anything strange. A handful of sightings will naturally lack sufficient evidence for identification, just as the police cannot find enough evidence to solve every crime.
A close encounter of the second kind is a sighting apparently supported by physical evidence, typically photographs. However, these photographs are often ambiguous pictures of ordinary objects. It is now easy to fake a photograph using Photoshop, for example, and there have been many hoaxes. No convincing evidence has ever been produced to support a genuine close encounter of the second kind. Many aspiring photographers want to learn how to Photoshop pictures just to adjust their color and exposure.
A close encounter of the third kind involves direct contact between humans and aliens who often have messages for humans, for example about the dangers of nuclear war.
Stories of close encounters of the fourth kind, where a human is abducted by aliens, now outnumber stories of encounters of the third kind.
Typically, people describe being pulled into an alien spaceship where they are probed and where, sometimes, they are forced to have sex with a female alien.
Now it has emerged that experts agree that most people who claim alien abduction experiences are perfectly sane and sincerely believe they have encountered aliens. Apparently, there is a common phenomenon called ‘Sleep Paralysis’ that can make some sufferers think such occurrences are real.
Sleep paralysis occurs just before one falls asleep or wakes up, normally lasts a few seconds and may feel a little odd, but no more.
But in a minority of cases it can be a terrifying experience, accompanied by a strong sense of evil, difficulty breathing, seeing lights and grotesque figures, hearing voices and feeling one is being dragged out of bed. Not to worry, your GP can soon put you right.
It would appear the whole alien encounter phenomenon seems to have nothing to do with outer space and everything to do with inner headspace. Phew, sez you!