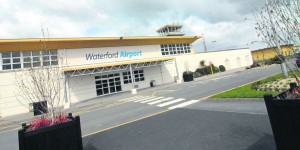 There must be an election looming as it looks like Waterford Airport has finally got the go ahead for key funding to develop the longer runway.
This will enable medium sized jets to use it and this weakness has been a restriction for many years at Waterford Airport.Rival airports in Kerry, Knock and Donegal have longer runways. There was a danger that Waterford might go the way of Galway and virtually cease operations apart from the Coastguard service
and private jets.
The runway will be extended to 2,280 metres from its existing 1433 metres and will enable Boeing 737 jets to land and also an Airbus A320.
Private investors are to put up another 5 million euro and local authority 2 million euro.Local authorities to invest are Waterford, Kilkenny and Wexford, who will all benefit from the improved international access.
According to reports among the private investors are Dawn Meats, Glanbia and also Coolmore Stud, the latter use the airport for private aircraft
The announcement by the Department of Transport with Shane Ross is one of the best news for the region this year at a time of Brexit worries it is a boost.Our own Minister John Halligan has put in much effort on the project and as one of the Independent ministers and colleague of Shane Ross for the past 3 years he had his ear and despite
opposition in some circles it is finally going through.
Tourism and business interests in the South-East are delighted with the runway development and want it delivered as soon as practical.
The main thing is to get it done in a quick time scale and within budget.
The hunt must begin to attract traffic, it would make a great location for freight transport and get some of the business form Dublin where freight rates could be higher.
Local industries could possibly support this initiative. Pharmaceutical firms could find this option useful going forward, the fish and food sector also.Great to see the food industry back the airport in investment with Dawn and Glanbia. They are to be commended.
Kerry and Knock have both done well from international tourism due to the better connectivity to those regions.UK and Germany connections have helped Kerry. Dublin is really busy so having more flights to the regions boosts regional development.It will also spread tourists around more as Dublin hotels are top heavy and room rates much higher than the regions.It might take a few years for the runway and flights to be operational. It should also be a great boost for emigrants to fly home more frequently and for people to work or do business in the UK. Could Ryanair be enticed to use Waterford back to where they started their very first UK service in 1986?