Kilmacthomas has been transformed in recent times, with an enterprising and creative atmosphere now prevailing in the Mid County Waterford village. Kilmac is now representing Waterford in a national enterprise competition. (header across right page) It has now almost become a cliché to speak about how the Waterford Greenway has been transformative for communities throughout County Waterford. Kilmacthomas has capitalised more than most thanks to its location at the midway point of this fantastic new amenity.
However, it wasn’t simply a case of the Greenway opening and communities automatically reaping dividends. 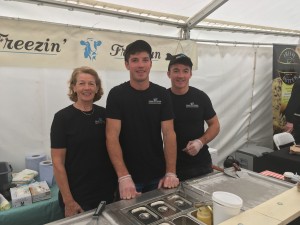 Grace Kiersey with sons Ivan and Tom of ‘Freezin’ Friesian’.

Many people have been working incredibly hard to ensure these dividends became a reality. In recognition of the enormous progress which has been made in the village, Kilmacthomas has the honour of representing Waterford in this year’s Bank of Ireland Enterprise Town Awards and the judges visited the area on Friday last. The efforts undertaken by local people to capitalise on the success and positivity generated by the Waterford Greenway were clear to see. A perfect example of these efforts was seen recently in the episode of RTÉ One series ‘At Your Service’ which featured Kiersey’s on Main Street, Kilmacthomas and which was repeated on Sunday evening last.
The Brennan brothers visited Kiersey’s to assist Jenny Kiersey and her family in redeveloping their successful business in order to fully capitalise on the impact of the Greenway.
Kiersey’s is a perfect example of a business that saw potential and worked hard to capitalise on this. Other new businesses have opened in Kilmacthomas while many new enterprises are also springing up around the area – Coach House Coffee and Waterford Greenway Bike Hire at the Union Workhouse, Mark’s Greenway Café in the Square, Maggie’s on the Main Street to name a few.
The feeling of positivity and vibrancy which exists in the village and surrounding areas was certainly evident as the judges made their way around Kilmacthomas on Friday as part of their adjudication process. After arriving at the Union Workhouse, they were transported to the nearby St Declan’s Community College. 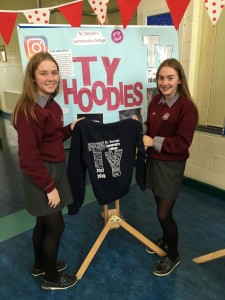 I was delighted to be asked to meet them and to speak on behalf of St Declan’s during their visit to the school.As a former student of the school, I outlined its many achievements and the important role it plays within the local community. It’s quite remarkable that a village the size of Kilmacthomas can lay claim to having a secondary school of the magnitude of St Declan’s.
As the school prepares to celebrate the landmark year of its 50th anniversary, it’s perhaps very appropriate that the school has just welcomed its largest ever intake of first year students bringing total current enrolment to an impressive 715. However, having such a successful school in rural Mid County Waterford did not happen overnight. The cohort of people who set about striving to establish a vocational school in this area of Mid County Waterford 50 years are to be applauded for having the vision, foresight and determination to pursue their project. 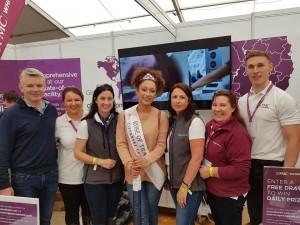 They were not deterred by any obstacles which they found along the way – which is certainly a sign of true enterprising spirit.This enterprising spirit was continued down through the years at St Declan’s, in particular by people such as former principal the late Sean Aherne, a local man who oversaw huge growth and expansion at the school. This enterprising and crusading spirit has also been passed down through generations of students as could clearly be seen on Friday last. Students who created their own enterprises as part of their Transition Year programme met with the judges at St Declan’s and displayed their very impressive work.
With so much drive, determination, enthusiasm and creativity, we will certainly be hearing much more from these students in the near future.The achievements of these students perfectly highlight the advantages associated with participating in the Transition Year programme. While some may dismiss this year as a ‘doss year’, St Declan’s has always encouraged students to become active citizens within their community and to pursue other interests and activities which they may not have had the opportunity to do in the past. Thanks to the Trojan efforts of TY co-ordinator Brigid Mitchell, students at St Declan’s can enjoy a year filled with a variety of activities and, if they chose to give the year their full commitment and dedication, they can certainly excel.