Home » Opinion » Foley on File » At one with nature

At one with nature 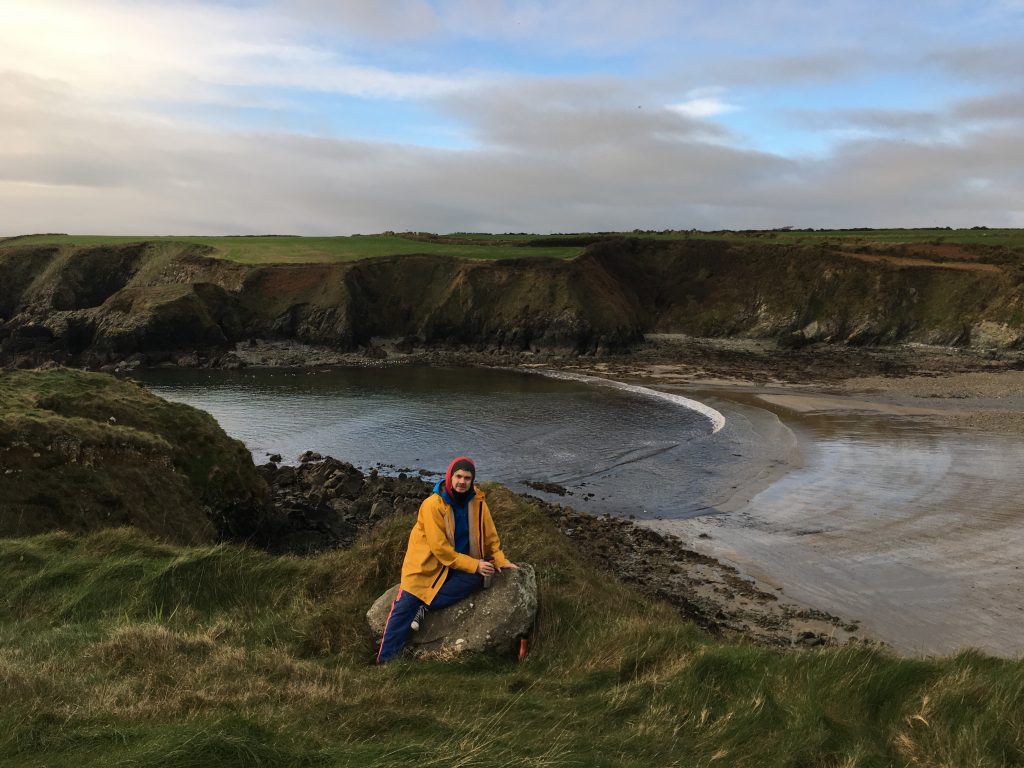 WATERFORD’S Sean Corcoran is renowned for his magnificent sand art creations and has certainly earned quite a reputation. His home is situated at Tankardstown, Bonmahon at what is one of the most scenic locations along the Copper Coast and, arguably, one of the most scenic areas in all of County Waterford.
In what is a great example of creating a sustainable living in a rural area, Sean and his wife Miranda have developed a successful and popular business based at their home.
The Art Hand is a custom built school which offers a range of exciting art workshops and events for groups including parties with a difference for children. The couple opened their family run business in the midst of the recent recession.Worryingly, Sean didn’t see any other obvious job opportunities in the area at the time so he decided to also work with the natural elements surrounding him. He says he had his “epiphany moment” in April 2011 when strolling past Kilmurrin Cove.At that point he had never given much thought to the concept of ‘environmental art’. 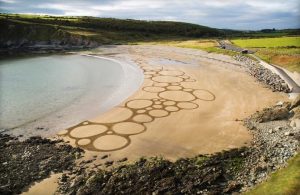 “A jeep with a horsebox pulled up and a racehorse was brought onto the sand and went around in circles while on a lunge rope,” he explained. “The horse left this amazing circle behind and I took a photograph. The horse and trainer went away and I was still sitting there looking at the beautiful circle left behind. That was the first moment when I considered that maybe the sand could be my canvas.”Sean studied this art form and completed a few test pieces. At the time, he served as Director of the Tramore Promenade Festival and brought three of the top sand artists in the world to the festival.The artists delighted spectators and Sean was able to observe them in action up close.
Over time, Sean says he gradually plucked up the courage to step forward himself to showcase his own talents.
“The reaction from the very start has been phenomenal,” he explained. Sean has gone on to create many masterpieces locally and in other areas as well. He says he is fortunate to live in what he regards as one of the best areas in the country for engaging in sand art. He primarily uses Bonmahon Beach for solo projects and often brings groups to Kilmurrin Cove.One of his recent high profile creations involved a depiction of soldier James Robert Love on Tramore Beach as part of commemorative events held to mark the 100th anniversary since the ending of World War I.
The project, which was supported by Waterford City & County Council, received very favourable feedback online. James Robert Love was chosen to be the subject of the piece from the many Waterford people that went to serve in ‘the war to end all wars’. “I suppose he would have played on the beach as a kid so it was poignant to reproduce his portrait in the sand,” said Sean. During his time working on the project, he met many people who recounted stories about their own relatives and their associations with World War I.
Impressive drone footage of the final product was captured from the air and many images from Sean’s different creations, including pieces for which he was privately commissioned, have been viewed online by people around the world. 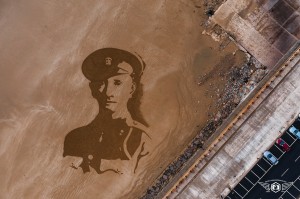 The sand art depiction of James Robert Love created as part of the 100th anniversary of the ending of World War I.

Sean says the most iconic beach art pictures are captured at low sunrise during winter sun.
The tides obviously play a big part in creating sand art as well.“Often the main objective is to come away having a record of what has been made because, within an hour or two, it’s gone,” he explained.
“I don’t lead a nine to five life. I live as much by the tides as by the time.”Sean enjoys the “spiritual element” to being at low tide and the “idea of a new frontier”.He says being based on the Copper Coast in such beautiful surroundings lends itself to creativity and likens his activities to ‘meditation’.
In addition to his sand art activities, he continues to work on collaborative art projects with schools in the region in which the use of recycled materials is emphasised. His latest project involves stone stacking at Kilmurrin Cove. With thanks to funding through the Copper Coast Geopark, the aim is to create six permanent sculptures at the entrance to the Cove and to create a ‘sustainable experience’. He hopes that these will become landmark pieces which will become synonymous with Kilmurrin Cove and he is delighted that the Copper Coast Scouts are coming on board as part of the project.
Sean points out that the activity of stone stacking has many benefits and is recognised as being particularly soothing for children with attention deficit hyperactivity disorder (ADHD). There is a growing movement of stone stacking around the world which has been further heightened in recent times through social media.
However, Sean points out that people have been practising stone stacking for generations. “An area like the Copper Coast, which is synonymous with geology, opens our eyes to the types of rocks which exist. Kids’ eyes open wide when you mention rocks in the context of volcanoes and dinosaurs.” He says stone stacking is a sensitive area and must involve a careful approach. He explains that his plans have already sparked a debate online and he would like people to come on board as part of the dialogue.
“Everybody’s opinion of what looks nice or what’s right for the environment is different,” he said.
He is conscious and respectful of different opinions and has created a sustainable stone stacking statement (which is available to read on ‘The Art Hand’ Facebook page) in order to ensure everything he does is carried out in a responsible way.