It was interesting to read last week that Ballyhaunis in County Mayo is being over run by feral cats.
Apparently, the number of wild cats has reached epidemic proportions and volunteers counted at least 30 of the species in just one back street. Mind you, Ballyhaunis must be the most rodent free town in Ireland so it’s not all bad.The reason I mention this is because it reminds me of a conversation I had many years ago with the legendary RTE radio producer, Ian Wilson, who played such a vital role in the development of the then emerging U2. 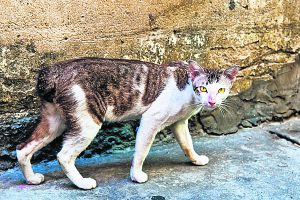 Ian told me that as part of his thesis for his college degree he had to write a paper on the growth of feral cats in urban areas and he was given the Ballybricken/Barrack Street rectangle in Waterford as his area to study.
After a week of trudging the streets late at night, one of the locals asked him what he was up to. “Oh yes,” said the man when Ian explained, “there used to be millions of wild cats on Ballybricken but as soon as the new takeaways opened there wasn’t one to be seen!”Incidentally, I wondered what the collective name was for a group of cats and my dictionary tells me it is a ‘clowder’.