A group of concerned locals attended a meeting in Ballyduff Community Centre last week as the battle to save Kilmeaden Post Office continues
CONCERNED locals once again attended a specially convened meeting in Ballyduff last week to discuss the threat surrounding their local post office.
The Kilmeaden Post Office deals with customers from throughout a wide catchment area including Kilmeaden village itself along with Ballyduff, Bonmahon, Dunhill, Kill and Butlerstown.
At a previous meeting to discuss the issue last summer, a committee was formed to fight any proposed closure.
Since then, the committee has met on a number of occasions and has held meetings with representatives from An Post where the importance of Kilmeaden Post Office to the local area has been clearly outlined. 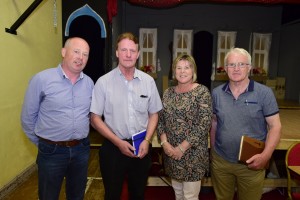 More than 800 names were sent to An Post as part of a petition expressing opposition to the closure of the post office. A door to door leaflet drop was carried out in the local area to encourage people to use their post office. “People really rallied round and made it their business to walk to the post office rather than doing everything online. They made a conscious effort to support the post office,” said Deputy Mary Butler who was speaking at last week’s meeting. An Post explained to the committee that, along with the level of transactions, other criteria being used to determine the future of post offices include the intentions of the postmaster, proximity to other post offices etc. The current postmaster Mr Byrne had tendered his resignation last year. He later withdrew this resignation and the Kilmeaden Post Office continued to operate. However, in April, An Post published its new vision for the post office network. It has committed to having a post office within 15km of every community with more than 500 people, and within 3km in urban areas.In a deal struck with the Irish Postmasters’ Union (IPU) after three months of mediation, it is understood that this will result in about 20 new post offices being opened around the State. An Post says it plans to invest €50 million in its network of post offices over the next three to four years in a move designed to modernise its operations and position it to exploit ecommerce opportunities. 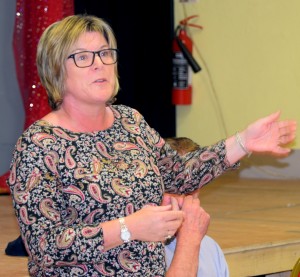 Mary Butler TD, speaking at the meeting to discuss the future of Kilmeaden Post Office.

Some postmasters who wish to retire will be offered a voluntary severance package – which means some post offices will close. It has offered an exit package to 390 post offices.
There will be no compulsory closures and postmasters have until July 31st to signal their intention on the matter. Cllr John O’Leary (FF) expressed his disappointment that the criteria set out by An Post works against smaller post offices in rural areas. “Unfortunately the worry we have is that Kilmeaden is among the 390 offered an exit package,” he said.He noted that An Post seems to be striving to create a “more sophisticated post office network” and was changing its business methodology to the detriment of small post offices in rural areas.
Any post office with just one employee is also believed to be under threat.Cllr O’Leary explained that Kilmeaden has two part time staff members which equates to one.
Deputy Mary Butler said she had contacted the IPU to get a list of other post offices which may be affected.While she has obtained details of post offices under threat from other counties, she has not yet been able to source the Waterford information.Nationally, there are now 691 Grade A Post Offices and 390 Grade B Post Offices. 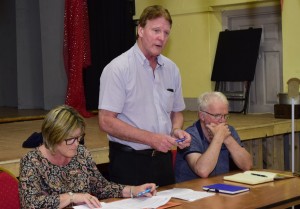 Kilmeaden Post Office is now classified as a Grade B Post Office.Crucially for Kilmeaden, a Grade B Post Office cannot transfer its management.
This means that if the current postmaster takes up the exit package, there is no guarantee that Donal Hickson, who took over the Centra store alongside the post office last year, can run the post office despite expressing an interest in doing so. Mr Hickson pointed out that, 18 months ago, the CEO of An Post was interviewed on radio and said that Ireland only needs 700 Post Offices.
“Lo and behold, there are now 690 Grade A Post Offices and the rest are Grade B,” he said. Mr Hickson said it had been very difficult for Mr Byrne to keep the post office open as An Post have made no investment into the property and did not allow recently proposed improvement work to take place. He explained that the level of social welfare contracts is a key issue when it comes to determining activity at each post office. Each post office must have over 500 such transactions, however, Kilmeaden has less than 300 so it doesn’t meet the criteria.
A number of questions from the floor were taken which highlighted the concern in the locality at the prospect of the post office’s closure and the ripple effect it may have on the local community