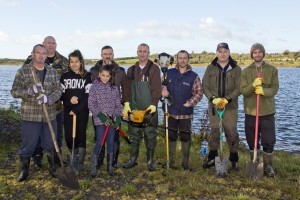 A GROUP of proactive volunteers are striving to improve and conserve beautiful Belle Lake in East County Waterford.
The Belle Lake Protection Group was established by Alan Walshe and Cathal Quigley in the 1990s.
In 2000, it was renamed the Belle Lake Trust.
The group monitors and protects the conservation of Belle Lake which is County Waterford’s largest natural fresh water body.
The Trust’s members have a very clear vision for Belle Lake which is a proposed natural heritage area.
Last week, a large clean-up took place around the pump house area on a site which was previously operated by Waterford Council.
The clean-ups are part of the Trust’s overall vision for the protection and conservation of the area.
“At the moment it’s a work in progress,” explained Chairman of the Belle Lake Trust Alan Walshe.
“We knew the site was being decommissioned by the council, so we came up with ideas for the area. Although many genuine anglers who are interested in fish stock use the lake, there were some unethical anglers who were abusing the lake. There was a lot of poaching and a lot of rubbish being left around the lake.”
The first clean-up was a massive undertaking due to the large accumulation of rubbish over the years.
This latest clean-up wasn’t as arduous; however volunteers still had plenty of chores to keep them occupied.
Alan believes the area could be utilised much more.
“It’s a gem in Waterford’s crown,” he said.
“It’s a great natural resource which should be utilised by the public as an amenity. We don’t have much freshwater here in Waterford. It’s not like in the Midlands where lakes are ten a penny. We only have a handful of lakes.”
The Belle Lake area is a haven for wildlife, and there are many different habitats and lots of rare flora and fauna.
“As we enter winter, we will have birds visiting from foreign lands so there will be good opportunities for bird watching,” said Alan.
The Trust’s members are working with other organisations and hope to carry out a survey of the lake next spring.
“In time, we hope to build a picture of the whole life cycle of the lake,” he said.
Included in the Trust’s long term vision is the utilisation of the now defunct pump station.
“Maybe in years to come the pump station could be used as an environmental interpretation centre or have community uses,” he said.
In conjunction with the Irish Wildlife Trust Waterford Branch, several days of talks and walks have been given at the shores of Belle Lake.
Currently there is a lot of interest from local groups to have more walks and talks.
It’s hoped that any funds collected for the walks could be re-invested into maintenance and conservation efforts.
Potentially, Belle Lake could become a centre for Freshwater Environmental Education.
One of the Trust’s primary goals is to encourage more people to enjoy fishing in the area.
The Belle Lake Pike Angling Club, which currently has 30 members, was established two years ago.
The Club, along with the Trust, hope to preserve the tradition of fishing on Belle Lake.
“Generations of families have fished here for years so it’s a real tradition. It’s a great pastime, especially for people who are retired but it can be enjoyed by people of all abilities and ages. You’re out in the fresh air at one with nature.”
Alan believes increased fishing activity in the area could have a positive knock on effect for surrounding businesses, bringing more people to the area
The Trust has clear objectives in order to promote activities on the lake while at the same time preserving its natural beauty and wildlife.
“We have very clear policies,” explained Alan.
“We hope to introduce day tickets to enable more people to come fishing here. We’re 100 per cent ‘catch and release’ as this preserves the stock.”
He continued: “Boats can be hired out which have been cleared and sterilised. In the past, one of our fears centred on people using their own boats which may have been used on different lakes. This could have resulted in zebra mussels, for example, getting into the lake and these could decimate flora and fauna.”
Alan said Waterford City & County Council have been very supportive of the efforts of the Trust.
“Thankfully the council and local landowners have been very good to facilitate us, including providing items for our recent lean-up” he said.
The AGM of the Belle Lake Trust takes place on Wednesday 25th November at The Holy Cross, Butlerstown at 7pm.
For more information on the Belle Lake Trust, email bellelaketrust@hotmail.com; for more information on the Belle Lake Piking Club email bellelakepikeanglingclub@gmail.com; or call secretary Mark Phelan on 087 628 0629.