Congratulations to Waterford FC on a successful return to the Premier Division. When the Blues were promoted last season we all said we would be happy if they could just manage to stay up but, as it turned out, we finished in fourth place and, for a long time, looked as if the third spot was ours to take.
However, because champions Dundalk and second-placed Cork City are in the Cup Final, fourth place guarantees The Blues European football next season.
Over the years, Waterford fans have had some thrilling times in Europe and faced the likes of Manchester United and Glasgow Celtic. Our last time out was in the 1986/87 season when we were defeated by Bordeaux. 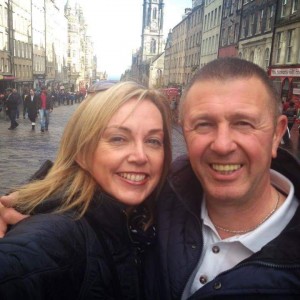 A recent photograph of former Waterford FC footballer, Brian Gardner, and his wife, Lyndsay. Brian, who signed to Waterford from Preston North End, scored the magic winning goal in the 1980 Cup Final against St Patrick’s Athletic that propelled the Blues into the European Cup Winners’ Cup.

The fixture that sticks in my head is the 1980/81 Cup Winners Cup when we were defeated home and away by the champions of the then Soviet Union, Dinamo Tbilisi. The Georgians went on to account for West Ham and win the competition outright defeating Carl Zeiss Jena of East Germany in the final.As a working reporter, I was contacted by a senior executive in the International Press Association who said I had been recommended as a suitable person to cover the game on its behalf. “Will do,” said I, chuffed at being asked.Dinamo had agreed to play the first leg in Kilcohan Park and within days I received my lengthy set of instructions for the game. Remember, there was no internet or mobile phones in those days so my only point of contact was the pay-phone in the little office beneath the main stand.

Apart from supplying team selections before the game started, blow-by-blow accounts were required every twelve minutes. This was to facilitate my report being translated into at least six different languages across several time zones of the vast Soviet Union.So, for the entire game, I was up and down the stairs like a yo-yo dictating my report down a bad line to a copy-taker in London with poor English and barely able to understand my accent. In truth, I only managed with the help of the late Mick Browne (The Munster Express) and Leo Dunne (News and Star) who filled me in each time I returned to the stand.

It all worked out in the end and I started to look forward to the cheque from the Press Association. For God’s sake, my account had been read by countless millions of people across the Soviet Union, it had to be a fairly good cheque for all that work! Three months later it finally arrived and I got the official union rate of six pounds sterling for all my efforts. The Press Association later had the cheek to ring and ask if I would be interested in doing other work for them in Ireland as it arose. I politely refused!