Sometimes, following the death of a person who had previously suffered a devastating bereavement, you will hear it said that they died of a broken heart.In the past, many doctors dismissed such an ailment but it has now been established that there is indeed a condition known as Broken Heart Syndrome, sometimes referred to as Takotsubo Syndrome. 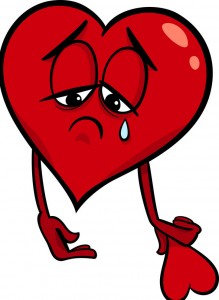 It is rarely fatal but it is a very real experience and the person in question is suffering from real symptoms. It is not yet known why some people are more susceptible than others
Swiss researchers at University Hospital Zurich have discovered that a heart can be damaged following a sad event. The exact cause is not known but experts believe it could be linked to raised levels of stress hormones in the brain such as adrenaline.

It is different to a heart attack caused by blocked blood vessels but it has similar symptoms including breathlessness and chest pain. Researchers say it is mostly a temporary condition with the heart muscle recovering over days, weeks or months.The chief executive of Cardiomyopathy UK, Joel Rose, said the findings of the Swiss researchers was an important piece of data that would help shape their understanding of a form of cardiomyopathy that was often overlooked and remained something of an enigma.

Professor Dana Dawson, a researcher from the University of Aberdeen funded by the British Heart Foundation, said the Swiss findings into Broken Heart Syndrome supported something they had long suspected.
Figures for this country are not readily available but Broken Heart Syndrome is thought to affect around 2,500 people every year in Britain.