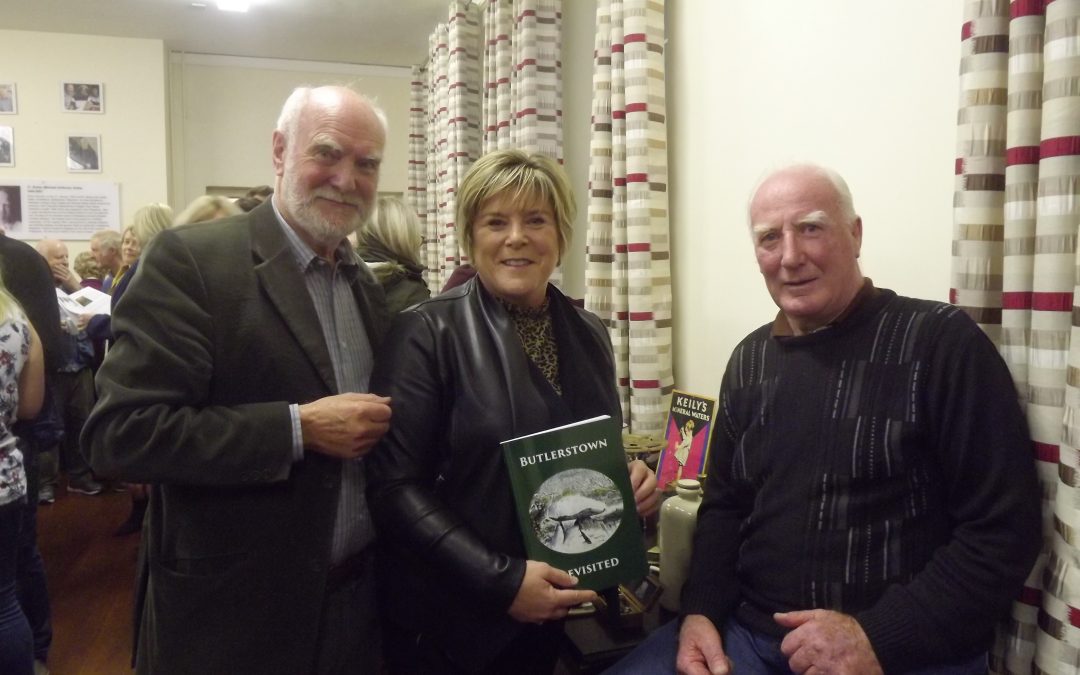 ‘Butlerstown Revisited’ is the latest publication produced by Meitheal Staire Butlerstown (Butlerstown History Group) and was launched in the Fr Rufus Halley Centre last week.
The latest book from the industrious Meitheal Staire Butlerstown (Butlerstown History Group) was launched last Friday night at the Fr Rufus Halley Centre.
In attendance were members of the local community as well as Bishop of Waterford & Lismore Alphonsus Cullinan, Mary Butler TD and Deputy Mayor of Waterford City & County Council Cllr Jim Griffin. Entitled ‘Butlerstown Revisited’, the book follows on from the hugely successful ‘Unlocking Butlerstown’ which was released in 2016.
Speaking at the launch, Fr Pat Fitzgerald, PP, described the book as being an “interesting, engaging and a really enjoyable read”.
Although he is a self-confessed “blow in”, Fr Fitzgerald said he found the book to be a real “page turner”.
“The people of this community will be entertained and informed, amused and enlightened, impressed and even inspired by what they read,” he said.
Fr Fitzgerald said all in the community owe a great debt of gratitude to everyone involved in the publication of the book.
“They have done a great service to this community and generations to come,” he said. 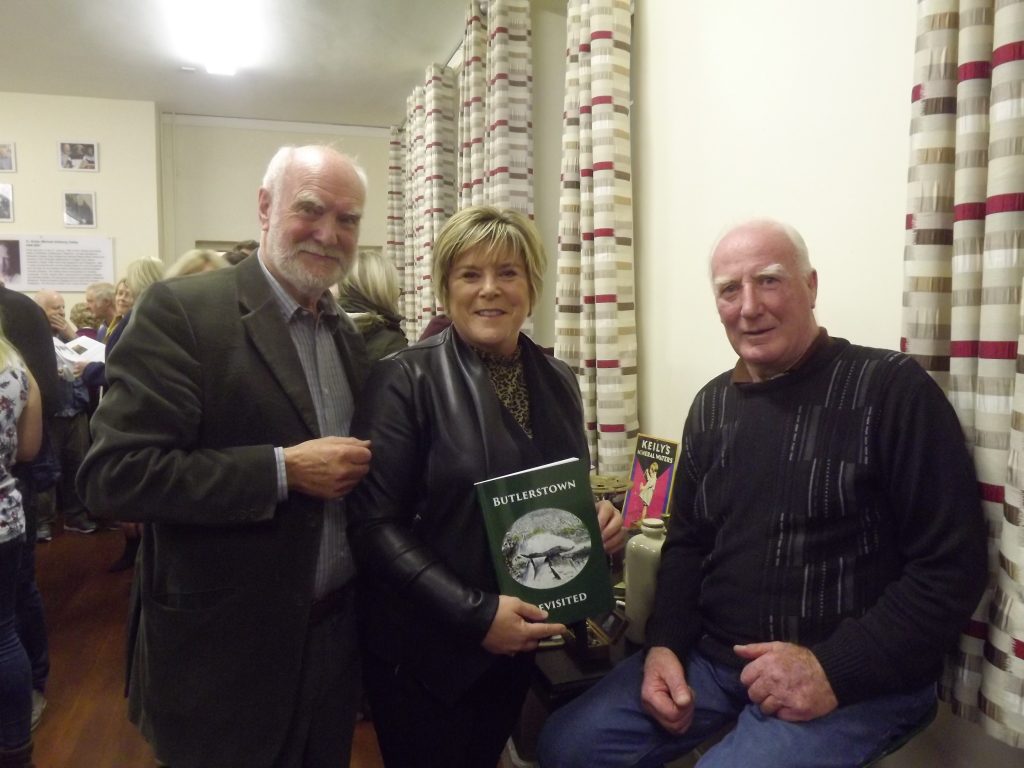 He described ‘Butlerstown Revisited’ as “a gift that will keep on giving” which “stirs memories and celebrates the social and physical landscape of the area” and “fosters a sense of identity, pride of place, and a sense of connection”. “The book awakens a sense of community and highlights how interconnected we are,” he added.
People and places
‘Butlerstown Revisited’ is dedicated to memory of the late Billy McCarthy of WLR fame, and his life is one of the stories which is remembered in the book.
Billy moved into The Coach House near Butlerstown Church in 1993 with his partner Des. Although a newcomer to the area, he made the area his home and all in the Butlerstown History Group were delighted that he launched their first book in March 2016 shortly before his untimely death in November of that year.
‘Unlocking Butlerstown’ was dedicated to the memory of Fr Rufus Halley after whom the Butlerstown Community Hall is named.A native of Killotteran, Fr Rufus was a well-known and much-loved missionary of the Society of St Columban.He worked to build peace between the divided Muslim and Christian communities in the Philippines but was shot on the island of Mindanao in 2001.In August, the centre which is named in his honour played host to the launch of ‘Murder in the Missions’ which documents the story of Fr Rufus, his admirable work in the Philippines and subsequent death.In ‘Butlerstown Revisited’, the lives of a whole host of other local people are celebrated, including renowned musician Dominic Hearne, Sister Kate Cleary, and members of Butlerstown ICA.
Butlerstown’s sporting stars are also celebrated, including Michael Hayes, Jim Hunt, John Kirwan and Pierse ‘Pierie’ McGuire.Those who now live abroad are remembered in a dedicated section exploring the Butlerstown diaspora. In an interesting segment, the lives of the fifth-class students at Butlerstown Boys School in 1958 are explored in detail. At the time, the school (which is now the Fr Rufus Halley Centre) was made up of four classrooms, two for boys and two for girls. Boys and girls were in separate classrooms and playgrounds until the mind-1960s when they were mixed. The paths which the lives of the students have taken are explored. Sadly, five of the 18 pupils who are photographed at the school in 1958 are deceased.Major historical events are told from a Butlerstown perspective, including the First World War, rural electrification and the Big Snow of 1947. The huge efforts undertaken to improve Bulterstown Cemetery in recent years are also detailed.The old Priests House (which was formerly the Teachers House) was knocked to allow additional space in the upper graveyard. A Mass Rock was constructed, and the first Mass was celebrated on the Rock in July 2015.
The following year, construction work began on a Grotto.Our Lady’s statue was placed in the Grotto in the summer of that year and has proved to be a popular addition to the cemetery. Other local landmarks such as Butlerstown Church, Whitfield Court and Pemborkestown House are well documented in the book, as well as natural features such as the Suir Estuary and new additions to the local area such as the Waterford Greenway.
Local folklore is also explored in the impressive 188-page publication.
Shared stories
Speaking at the packed launch on Friday, editor of the book Dr Eddy Fitzgerald thanked the committee, and all involved in producing ‘Butlerstown Revisited’ following the success and hard work involved with producing ‘Unlocking Butlerstown’. “When you put the two books together you have a lot of history on the shelf,” he said.
“Stories shared around the table in the Fr Rufus Halley Centre have taken members of the Meitheal on many journeys and resulted in this book and its predecessor,” he explains in the book’s foreword. “What started as an effort to preserve old memories in the community has become a record of happenings stretching from pre-history right up to the present times. Butlerstown is so full of history and fascinating people. Many people have grown up and never lived outside their native parish while others have travelled to faraway places to make a new life. They all carry part of Butlerstown in their heart. “ He is particularly delighted that some Butlerstown natives, who now live abroad, have contributed articles and photographs to the publication. “In recent years, newcomers have been made welcome here and are gradually becoming familiar with its history and lore,” he added.
“It is the wish of the Butlerstown History Group that the stories will strike a chord with all who carry Butlerstown with them, young and old, near and far.”
Commenting on the recent debate surrounding the teaching of history at second level, Eddy Fitzgerald said it would be an “absolute tragedy” if young people grew up without any idea of their history or heritage and sis statement received a rapturous applause.
The huge pride of place which exists in Butlerstown and the surrounding areas was clear to see on Friday last from the huge enthusiasm with which the launch of ‘Butlerstown Revisited’ was received.
After the formalities had concluded, all of those in attendance enjoyed the refreshments and music provided and many stories were told as individuals reminisced amongst themselves and made their own personal trips down memory lane.
‘Butlerstown Revisited’ is sure to be of interest to anyone with a connection to this area of East County Waterford.It may have been a ‘labour of love’ for those involved, but nevertheless a huge amount of work went into producing this book and the end product is certainly a credit to all involved.‘Butlerstown Revisited’ (€12) is available to purchased locally, including from Butlerstown History Group members.