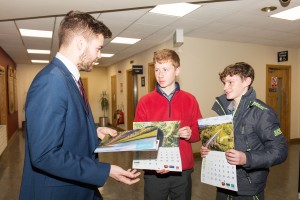 THE official opening of Waterford’s Greenway will, undoubtedly, be one of the major local news events of 2017.
Although this fantastic new amenity has yet to be completed in its entirety, it has already attracted visitors from all over Ireland and beyond.
The Greenway has revitalised Mid County Waterford and given a much needed boost to areas such as Kilmacthomas.
It has also generated a huge amount of Déise pride amongst locals as we now avail of an incredible opportunity to showcase our offerings to the wider world.
A fantastic new calendar has been created by Transition Year students at CBS Dungarvan Daniel Delaney and Eoin Power as part of a Student Enterprise Competition and is sure to further help in the promotion of the Greenway.
And for anyone who isn’t familiar with the Greenway, they will surely want to visit Waterford once they see the spectacular photos included in this stunning calendar. 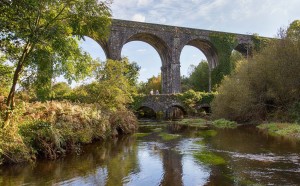 “Jewel in the crown” is a phrase which has been bandied about by local councillors on a regular basis in relation to the Greenway’s impact on County Waterford.
And after viewing such a gorgeous selection of photos as those included in this calendar, you realise how lucky we are to live in such a wonderfully scenic county and realise that the Greenway truly is a game-changer for Waterford.
Last week, the entrepreneurial students Eoin and Daniel met with Mayor of Waterford City & County Cllr Adam Wyse and local councillors, who all commended the duo for their efforts.
They explained that there has been a great reaction to the calendar and outlined their decision to embark on the project.
“We came up with the idea of doing a calendar as part of our Student Enterprise Project as it’s been a successful concept in the past. Last year, two students produced a really successful golf calendar,” explained Eoin. 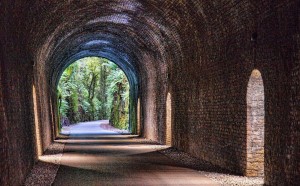 “We were thinking of doing something new and the Greenway is something new which people are really interested in,” added Daniel.
Both students are familiar with the Greenway as they often use the amenity.
In fact, they even feature in some of the calendar’s photos themselves along with their family members.
The calendar is selling very well and Eoin and Daniel are receiving great feedback.
“There’s a great buzz around it,” said Eoin.
“People have been telling us that they love the photos and that they think a Greenway calendar is a really good idea,” said Daniel.
Eoin and Daniel worked closely with talented local photographer John Foley to select different images from throughout the entire 48km Greenway route which stretches from Dungarvan to Waterford City. 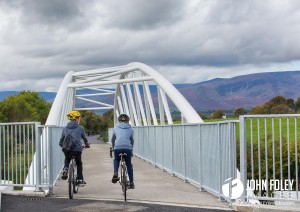 The N25 Bridge at Kilmacthomas.

Some of the locations featured in the calendar include the stunning Kilmacthomas Viaduct, Durrow Viaduct, Ballyvoile Tunnel, Ballyvoile Bridge, Clonea Strand and the Thomas Francis Meagher Bridge at Bilberry.
“I used two or three photos from my archives that I hadn’t used previously, but all of the rest of the photos were specifically taken for use in the calendar,” explained John Foley.
“When the guys approached me through Pat Whyte in Printmaster I said I would do the photos for free. We worked on the photos for two to three weeks and the lads were models in some of the shots and brought their families along as well.
Many of the photos show Eoin and Daniel cycling with family members and this highlights the family aspect of the Greenway.”
A number of aerial shots feature in the calendar, and John used a drone for capturing a number of these images.
“A location such as the Kilmacthomas Viaduct really lends itself to aerial photography,” explained John.
Through his own Facebook page, ‘John Foley Images’, John regularly shares his images of the Greenway as well as his spectacular shots of other areas across County Waterford.
“Every photo of the Greenway seems to get a lot of likes and shares on Facebook, no matter which location it is,” he said.
“There is huge interest in the Greenway which is really great for the county.”
The 2017 Greenway Calendar is perfect for anyone on the lookout for a Déise themed Christmas gift idea and is sure to be appreciated by all Waterford folk living abroad.
The calendar, which was produced and printed by Printmaster, is on sale at €7 and available in the following locations: Waterford City – The Book Centre; Dungarvan – Allrounder, Boston Barber at Dungarvan Shopping Centre, Shalloe’s Newsagent, O’Mahony Cycles, Dungarvan Tourism Office and Sip and Surf Café; Lemybrien – Walsh’s Service Station, Veale’s Shop; Kilmacthomas – Phelan’s Centra, Kiersey’s Bar and Tea Rooms; O’Mahony’s of Durrow and online at www.deisegreenway.com