Minister of State John Halligan has faced further questions about the provision of the second Cath Lab at University Hospital Waterford (UHW), with local concerns understandable in the context of this region’s ongoing wait for health equality. Speaking to new ‘Deise Today’ presenter Damien Tiernan on Monday, the Minister re-iterated what he told this newspaper in a statement issued three days previously. “Arising from comments at (last) week’s Public Accounts Committee, Senator Paudie Coffey and I held a meeting with An Taoiseach on Thursday afternoon at which we sought clarity on whether the second cath lab project at UHW was in any danger of being delayed or cancelled,” he said. 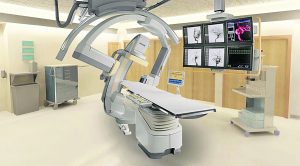 “The Taoiseach noted that it was also stated at the PAC that Minister Harris has instructed for the second cath lab at UHW to be prioritised. And he gave us his word that the second cath lab will be included in the upcoming HSE Capital Plan for 2019, which Minister Simon Harris is to sign off on shortly. “Subsequently, Minister Harris emailed all south east Oireachtas members confirming that the second cath lab at UHW would neither by cancelled or delayed as a result of the overspend on the National Children’s Hospital. I welcome this clarity and look forward to seeing physical progress on the new cath lab in the coming months.”
This statement came in the wake of a cautious welcome on the second cath lab by Fianna Fáil TD, Mary Butler, who was told by Health Minister, Simon Harris that the Children’s Hospital budget overrun would not impact on the delivery of the second cath lab. However, Deputy Butler is seeking confirmation of the project in the yet to be published 2019 Capital Plan for Health. “While I welcome this clarity, until the 2019 Health Capital Plan is announced, the people of Waterford will have doubts about the Government’s real commitment to
delivering the second cath lab,” she said. “The Minister keeps saying that it will be in the 2019 plan, but where is the Plan? We are now into the second month of 2019, and we are yet to have sight of it.”
Deputy Butler said that comments made by senior management in the Department of Health are different to that of their boss. With that in mind, Mary Butler stated: “Until the funding is spelled out in black and white
in the 2019 Capital Plan for the Department of Health, I and many people in Waterford
and the South East will be sceptical.”
She added: “Every week that the Plan isn’t published, is another week missed in terms of making progress on getting the second cath lab and delivering 24/7 cardiac care for the South East.” When asked by Damien Tiernan about whether contracts for the second cath lab had been signed or not, Minister Halligan said that the project was currently at a design tendering stage.For voters in Waterford, the lack of signed, sealed and delivered uncertainty on the new facility gives just cause for concern. The best remedy to that is to see a signed document and the project proceeding as hastily as possible. The people of the South East should not have to march again, either in Waterford or Dublin, to see the right and overdue thing done here.