The Golden Years Festival, organised by the Sacred Heart Active Retirement Group, takes place in The Tower Hotel, Waterford from November 12th – 14th.
The popular Golden Years Festival takes place in Waterford next week, with hundreds of visitors from across Ireland expected to descend on the city.
This annual festival is open to members of different Active Retirement Associations from across the country and The Tower Hotel will be the focal point of their activities from Monday November 12th to Wednesday November 14th.A wide range of activities will be on offer throughout the three days including a talent contest, bowling, a fashion show, dancing each night and a gala ball.
The vivacious Peg Tebay from St John’s Park is the Chairperson of the Golden Years Festival organising committee.
Peg is well-known for her infectious enthusiasm and the great energy and drive which she possesses.
She explained that the idea for such a festival originally came from the late Anna Manahan who was giving a talk to older people at The Tower Hotel in January 2004 as part of the ‘Age and Power Conference’. 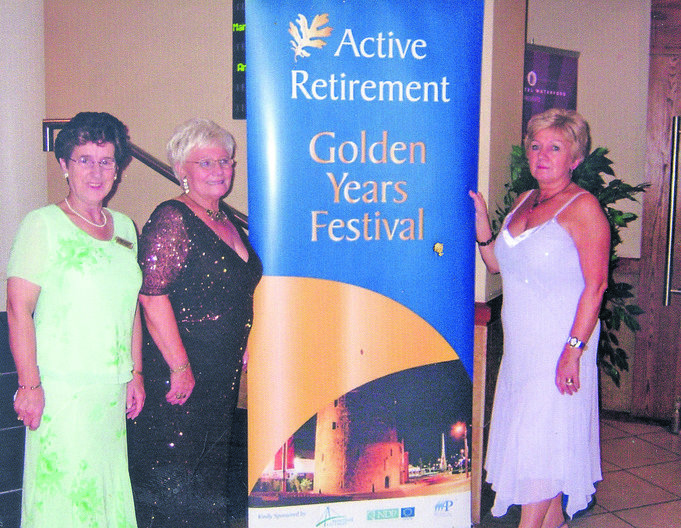 Babs Murphy, Peg Tebay and Bernie Murphy pictured at a past staging of the Golden Years Festival.

Anna, a proud Waterford woman who always championed local causes, outlined the need for such a festival in order to cater for society’s older demographic. “She was really strong that day. She stood up and said ‘what about us golden girls that built this country’?” said Peg.Never one to shy away when a job has to be done, Peg wasn’t found wanting when it came to taking up the baton and starting such a festival. “I said I’d do it and told her that I was willing to do anything,” she explained. Subsequently, the Golden Years Festival was started under the auspices of the Sacred Heart Active Retirement Group of which Peg is a member. “We knew if it took off that all of the Active Retirement members would come along,” explained Peg.
The festival certainly did take off and is now celebrating its 14th year.
Each year, The Tower Hotel is fully booked up during the duration of the festival and, such is the appeal of the festival, many visitors actually book for the following year before they depart. Other hotels in the city will also be accommodating visitors and the entire event is undoubtedly a fantastic boost to the local Waterford economy.“People come back year after year. They love it and it gives them something to look forward to each year,” said Peg. Due to the success of the festival it’s perhaps no surprise that other areas of the country have tried to get in on the action. “Other counties tried to take it, but we have kept it. We wanted it to be in Waterford and in Waterford it will stay,” says a determined Peg. The action packed itinerary includes the official opening by the Mayor on Monday evening following by a performance by the Higgins School of Dancing, a full cabaret floor show with singing, dancing and comedy and round one of the talent show.
This is followed by dancing with Dick & Dave.On Tuesday, the bowling competition takes place all day long at the Butler Community Centre.
Bowls has become a hugely popular competition among members of Active Retirement Ireland and there are a number of successful teams here in Waterford, both male and female. The competition is now an integral part of the Golden Years Festival.Also on Tuesday, an Ecumenical Service takes place in Christ Church Cathedral featuring the Waterford Male Voice Choir. In the afternoon, the popular fashion show takes place in The Granville Hotel with WLR’s Oliver Carroll acting as compère. Meanwhile, the art competition will take place in the afternoon at The Tower Hotel.
On Tuesday evening, part two of the talent show takes place along with performances from the Mulcahy School of Dancing and another full cabaret floor show followed by more dancing to the sounds of Dick & Dave.
Wednesday morning’s itinerary features a sing-a-along in The Granville Hotel. Visitors then have free time to explore Waterford before preparing for the mulled wine reception and the Golden Years Ball later that night in The Tower Hotel which is sponsored by Havenwood Nursing Home and Waterford City & County Council. Peg is grateful to all who have helped and supported the festival down through the years including the first chair John Higgins.She says Anna Manahan was delighted with the initial success of the festival and grew to be very proud of the event. In addition to the Golden Years Festival, members of the Sacred Heart Active Retirement Group are kept very busy with many different activities throughout the year. Last year, they produced an impressive calendar which showcased the varied activities which members have engaged in.
The calendar was devised as a fundraiser for the extensive refurbishment work currently taking place at the Sacred Heart Church. It was the first time the group produced a calendar and the reaction in the community and further afield was hugely positive.Peg says members went out in all kinds of weather in order to sell the calendars and she is grateful to everyone who supported the initiative in any way. Along with the calendar, the Sacred Heart Active Retirement Group also organised a massive raffle which netted €900, a bowling competition which generated over €650 and a quiz which raised €1,900. The total from these fundraising activities came to €11,500 which will certainly be a huge help in covering the costs incurred by the ambitious roof project at the Sacred Heart Church.
Since its establishment, the Sacred Heart Active Retirement Group has been providing older people in St John’s Park and the surrounding areas with an important outlet. “You could say the people our age built this estate,” said Peg.Members meet every week and discuss and plan upcoming events.
They also enjoy regular sing-songs, keep fit yoga and are grateful to all at the Butler Community Centre which is the base for most of their activities.
Members often get together with other local Active Retirement groups and enjoy having the involvement and support of other local groups for the Golden Years Festival.
“I love doing what we’re doing,” says Peg.The enthusiasm and dedication of the members of the Sacred Heart Active Retirement Group are certainly inspiring and their commitment to staging the Golden Years Festival each year must be commended. The festival looks set to be another resounding success and visitors from all over Ireland will certainly be guaranteed a warm Déise welcome once again this year.
For more information on the Golden Years Festival contact Peg Tebay on 051-857215.