Sitting in the sun in John Roberts Square recently, I overheard a couple discussing the black ‘Prow of a ship’ sculpture that faces down towards Barronstrand Street. They couldn’t figure it out and eventually concluded that it might be an obelisk or mausoleum to some long dead, famous person. 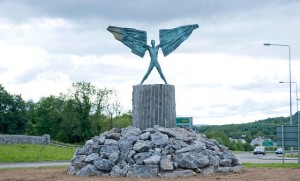 Perhaps, a little sign on the structure would help and inform. Also, if the water part of the feature was restored it might help people visualise what it’s actually meant to depict.Before it was commissioned there was a big discussion about what kind of monument should be placed in the Square. All sorts of ideas were put forward including a Trevi Fountain-like structure. From a tourist point of view, it might have been preferable because, sadly, we don’t see tourists queuing up to be photographed beside the current exhibit.

A striking example of what might have been can be observed on the Rocky Road roundabout on the outskirts of Ennis in County Clare. An imposing structure, named Daedalus by its sculptor, John Behan, but known locally as Icarus rises into the sky.The impressive statue was a gift to Ennis by the former Shannon-based company, Guinness Peat Aviation, to mark the town’s 750-year anniversary in 1990. It originally stood in the Market Square but proved to be too large for the location.