The Easter Monday ‘Clean Up the Comeraghs’ event, organised by the Comeragh Community Development Group, celebrates its 21st anniversary this year.

WATERFORD’S Comeragh Mountains are renowned throughout Ireland and beyond for their majestic beauty.
We are truly blessed to have such a gorgeous geographical feature on our doorstep.
The expansive mountain range, which incorporates popular beauty spots such as the Mahon Falls and Coumshingaun, is also surrounded by many villages and busy roads.
Maintaining an area of such beauty, which is also an area populated and visited by many people, isn’t an easy task.
However, we fortunately have many hardworking and enthusiastic volunteers who carry out Trojan work to ensure this landscape is preserved and protected for all to enjoy.
The annual ‘Clean Up the Comeraghs’ event takes place on Easter Monday once again this year. 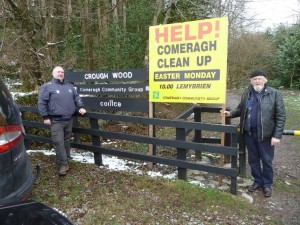 Two members of the Comeragh Community Development Group Tom and Michael Flynn outside the entrance to Crough Wood which is going to be extended to the bridge in Mahon Bridge and to the base of the Mahon Falls.

This is a significant year for the clean-up as it’s the 21st anniversary of the successful community initiative which tackles illegal dumping and littering.
“People continuously ask why we still organise this event every Easter Monday,” said Chairperson of Comeragh Community Development Group Declan Mulhearne.
“The answer to that is because of public demand and the support we get from every area. It’s an annual event for hundreds of people and it’s their chance to clean-up their own area before the start of summer.”
Last year saw the clean-up cover its largest area to date.
However, in an indication that the efforts of the group are reaping dividends and that illegal dumping appears to be reducing, the level of rubbish collected during the clean-up was actually the smallest amount since the event began.
Along with the entire parish of Kilrossanty and Fews, the clean-up also now incorporates the area from the Pike through Englishtown and onto Faha and McGrath’s Cross; the Mauma Road up to Beary’s Cross on the R671 Dungarvan-Clonmel road; from the Pike to Leamybrien on the N25; and from Leamybrien onto Kilclooney Woods on the R676 Carrick-on-Suir road.
All link roads leading onto the N25 and other routes heading towards Stradbally village are also cleaned.
Last year there were also a number of people from outside the village of Clonea Power who went as far as Flahavan’s Mill outside Kilmacthomas, while another group took care of the Ashtown area up to the Carrick-on-Suir road.
“There are now many roads in the Comeragh area that are now almost free of litter,” explained Declan.
“The reason for this is that people continuously pick litter in their own area all year round. The Comeragh Community Development Group are constantly being asked for bags when people see litter dumped in certain areas.”
However, some areas, such as the main routes leading out of Leamybrien and the forests in the surrounding area, continue to pose problems despite ongoing efforts.
“Packaging from takeaways and drive-thru restaurants are the scourge of the countryside,” said Declan.
“Unfortunately, some people sit into their vehicles, eat their meals and when they have finished they open the window and throw the wrappings and leftovers out onto the road. Disposable coffee cups, plastic utensils and plastic and tin cans are the new enemy of the countryside.”
Last year, Councillors representing the Comeragh District of Waterford City & County Council were among the first to call for the imposition of a levy on disposable coffee cups.
The idea has since gathered momentum nationwide and Declan Mulhearne agrees that a levy on disposable coffee cups would eliminate the problem.
“If people do not want to pay that levy then they should bring a reusable travel mug with them or else drink their coffee on the premises in a reusable cup,” he said.
Over the years the Comeragh Community Development Group has tried to educate, inform and lead public opinion by influencing policy at local and national level.
One of their first campaigns was to highlight the scourge of plastic bags in the countryside.
The campaign was eventually successful when a levy was placed on every bag purchased and, overnight, a problem was solved by hitting people in the pocket.
The group have always tried to lead the way with new ideas in how people’s attitudes and behaviours can be changed when it comes to litter.