‘Piltown Does the Oskars’ is being staged at the Lyrath Estate, Kilkenny as a fundraiser for the new Pil River Park and Playground and the parish’s three national schools.
PICTURESQUE Piltown is certainly punching above its weight in terms of community spirit, pride of place and entrepreneurial activities.Boasting several remarkable achievements, Piltown is a community which other communities in the region and throughout Ireland could certainly learn a thing or two from.Now, the South Kilkenny community is in the midst of a fundraising campaign to deliver a public park and playground for the local area.
A prominent site in the heart of Piltown, located by the Pil River, has been secured in order to develop the Pil River Park and Playground. It’s hoped that the amenity will become an integrated community parkland incorporating a playground, sensory garden and a relaxing seating area which will provide leisure facilities suitable for all ages and abilities.
The site for the amenity was purchased and donated to the committee by local philanthropist the late Johnny O’Shea. 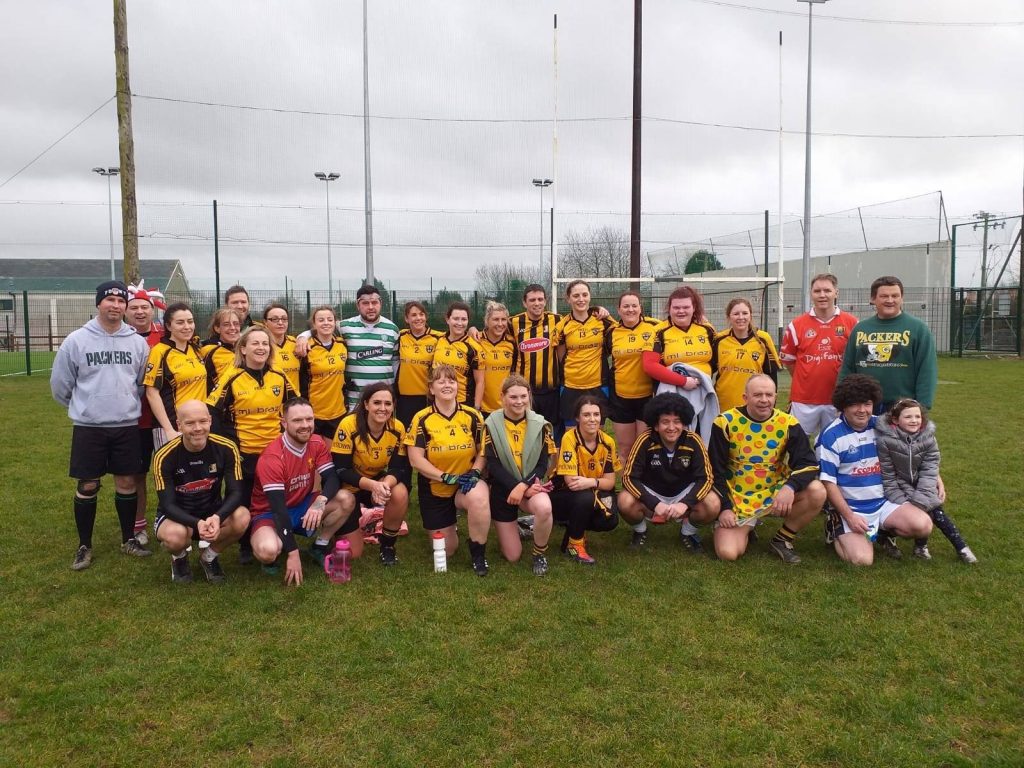 The cast of ‘Forrest Gump’ organised a Ladies vs Men Gaelic Football match at the GAA Complex.

He also donated an amount to the fundraising campaign – and the committee members are hopeful that their dream can soon become a reality. Numerous fundraising initiatives are underway in order to reach their target. Now, in order to purchase expensive equipment for the sensory garden, ‘Piltown Does the Oskars’ will be staged at the Lyrath Estate on Saturday March 14th. The event is also serving as a fundraiser for the three local schools – Piltown, Owning and Templeorum National Schools.
Past success
In November 2015, ‘Piltown Does Strictly’ was staged as a fundraiser for the three schools in conjunction with Piltown Community Enterprise.The extravaganza, which was also staged at the Lyrath Estate, attracted a crowd of 1,200 people. It’s hoped to replicate and even surpass the success of that night with ‘Piltown Does the Oskars’. The event is being staged with the assistance of Kevin Rowe Events, the same company which the community worked with to deliver ‘Strictly’. The fundraiser is a mammoth undertaking and consists of a core committee of eight members in addition to a total cast of approximately 60.
All cast members auditioned and met with an acting coach who selected people for specific roles, including a lead actor or actress for each movie. Participants have been through coaching sessions and have held meetings amongst themselves in order to perfect their performances.The movies which spectators will be shown on the night are ‘Mrs Doubtfire’; ‘The General’; ‘Veronica Guerin’; ‘A Few Good Women’; ‘Waking Ned’; ‘Sister Act’; and ‘Forrest Gump’. All were filmed at various locations around the Parish, and the recordings are sure to be well received on the night. Principal of Piltown N.S. Mark Connolly, who is PRO of the ‘Piltown Does the Oskars’ committee, is also participating as a cast member in ‘Mrs Doubtfire’.
He says it has been a “fantastic experience” but admits everyone was slightly worried about the roles which they were taking on! “Once you get into it, it’s really enjoyable. The whole objective is to get people out of their comfort zone,” he says. 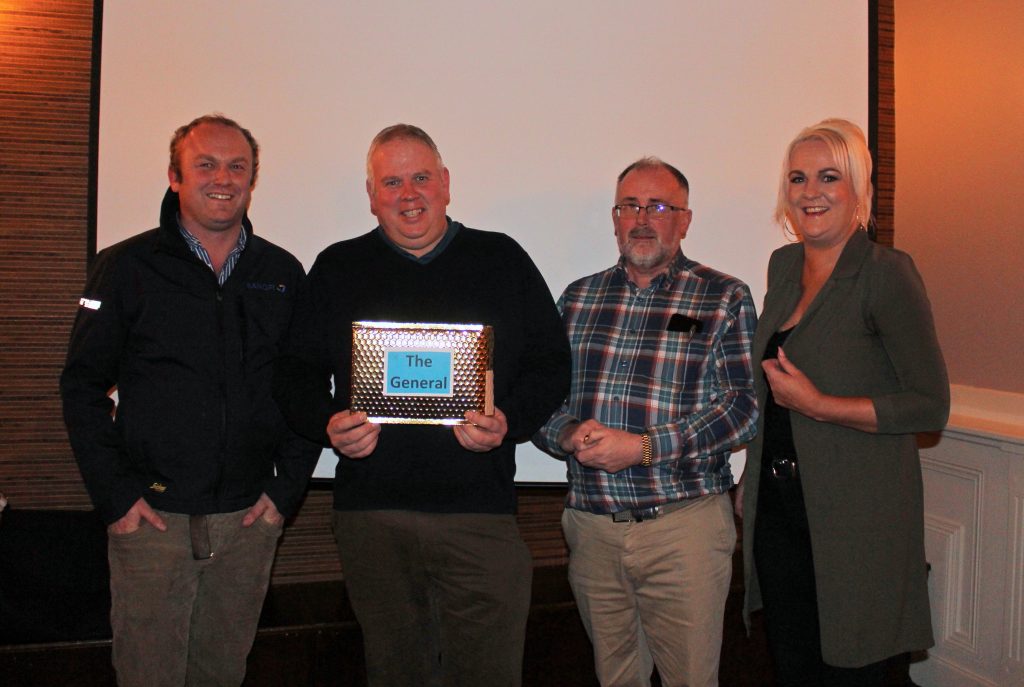 Fundraising
Participants have raised funds individually and also as part of their respective groups.
Among the fundraising events to have taken place are quizzes, walks, afternoon tea, and a novelty ladies vs. men GAA match. Sara Conlon is Chairperson of the ‘Piltown Does the Oskars’ committee and she praised all involved in the ongoing fundraising activities. “All the events have been really well supported by the community,” she says. “Everyone has been brilliant about getting involved and fundraising. All of the groups have been fantastic. People have been really generous throughout the village, the parish, Carrick-on-Suir and the surrounding areas. There’s a great community spirit.”
She says local businesses have consistently been strong supporters of all the community events which take place in the area. Sara adds that she is keen to help with any fundraising activities in the area and points out that the playpark is an amenity that is badly needed in Piltown.“It’s about giving something back to the community,” she says. “The whole community is on board. Kilkenny County Council have also been very supportive.”Included in Piltown National School’s ongoing plans is the construction of a new autism unit which Mark says is “badly needed”.
He explained that there have unfortunately been cases where local children with autism have had to go elsewhere for their educational needs because of the lack of such a service.
He believes there is now more awareness surrounding autism and other related conditions.
“This new unit will serve a great purpose,” he said, adding that the unit will include two specific classrooms, and other facilitates, which will cater for six children each.
It’s hoped that construction will begin in July and that the unit will be completed by Easter 2021.The school is also aiming to create a sensory garden and play area which the entire school population can enjoy. Mark adds that there is always fantastic support within the community for any school related fundraising events.“When a need arises, everyone comes together as a community for whatever the cause may be,” he says.
He believes the school’s project, and the nearby Pil River Park and Playground project, perfectly complement each other.He praised the committee involved with ‘Piltown Does the Oskars’ and all the work taking place behind the scenes. “It wouldn’t happen without the committee,” he said.Sara admits that the committee includes “one or two members who people are afraid to say no to!” “They are brilliant. Everyone is pulling together to get this done,” she said.
Other events
While Piltown and its hinterland remains a strong agricultural area, this is also a very enterprising area which has admirably taken matters into its own hands regarding job creation.This can be seen through the achievements of Piltown Community Enterprise and Piltown Enterprise Centre which showcase the very best of community collaboration.
Another example of Piltown’s entrepreneurial spirit and strong community ethos can be seen with the phenomenally successful Iverk Show.
In late August, crowds from throughout Ireland and beyond flock to the area for what is Ireland’s oldest agricultural show.A strong sense of community spirit is on display each year as volunteers from throughout the parish and surrounding area work together to stage one of the largest such shows in the country. Given Piltown’s impressive track record, ‘Piltown Does the Oskars’ looks sure to be another resounding success for this enterprising community.
‘Piltown Does the Oskars’ takes place on Saturday 14th March at the Lyrath Estate, Kilkenny. Tickets are now on sale at Centra, Piltown and at the three national schools. They are also available from any committee members. Buses will run from the parish on the night and tickets for the buses will also be on sale at Centra.