Representatives from various different community groups across County Waterford attended a Community Engagement Forum with members of An Garda Síochána in Kilmacthomas last week.
MEMBERS of An Garda Síochána staged a Community Engagement Forum in the Rainbow Hall, Kilmacthomas last week.
On Wednesday March 14th, on what was an incredibly wet and windy afternoon, many members of various different community groups, businesspeople and politicians from throughout Mid County Waterford braved the elements to meet with Garda representatives and discuss a range of issues.
Among those in attendance were Chief Superintendent Padraig Dunne, Superintendent John Mulligan, Detective Sergeant Shay Keevans, Sergeant Brendan Roche, Sergeant Alan Kissane and Sergeant Gavin Hegarty.
Addressing the large gathering, Supt Mulligan explained that the force is placing an emphasis on community engagement and it’s hoped that Gardaí and communities will work together in a “cohesive fashion”. 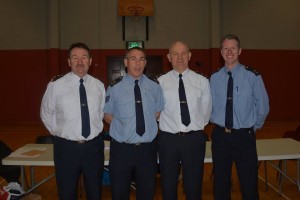 Kilmacthomas Garda Station now provides a 24/7 service and covers a large catchment area across Mid County Waterford.
Supt Mulligan explained that the standard of service currently being provided will be maintained and improved.
He outlined the community policing ethos and explained that there are 33 Community Alert groups now operational within the Kilmacthomas Garda area.
Members of An Garda Síochána work closely with these groups which are comprised of volunteers who are keen to promote and enhance community safety.
The aims of the Community Alert Programme are: to foster the process of community development; to reduce opportunities for crimes to occur; to unite communities in a spirit of neighbourliness and community service; and to devise programmes to improve the quality of life for all in rural communities.
There is a particular emphasis on older and vulnerable people.
Community Alert operates as a partnership between the community, An Garda Síochána and Muintir na Tíre and works on the principle of shared responsibility for crime prevention and reduction.Supt Mulligan acknowledged that the input from many different groups is helping to ensure that communities remain safe places in which to live and work in. Representatives from the Fire Service, Coastguard, Civil Defence and community groups such as Kilmacthomas and Stradbally Tidy Towns were also in attendance at last Wednesday’s meeting. One of the main success stories in Mid County Waterford from 2017 was the opening of the impressive Waterford Greenway.
The new amenity celebrates the first anniversary of its official opening next week. 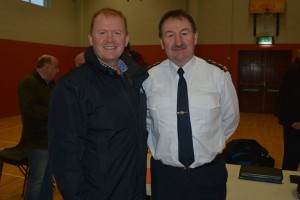 Supt Mulligan noted that people were apprehensive about the opening of the Greenway and some feared that there would be an increase in crime.
He acknowledged that the Greenway opening did bring challenges, but he emphasised the huge amount of positivity which it has generated amongst young and old alike.
Figures for 2017 show that more than 250,000 people used the amenity since its opening. Sgt Brendan Roche, who spoke about issues relating to retail security, said that while there has not been an increase in crime as a result of the Greenway, local businesses need to be aware of security issues due to the large influx of people.
He noted that “not all customers are coming in for a cup of coffee” as some may be scouting certain locations.
Sgt Roche outlined preventative measures which can be taken in order to combat crime. He said businesses should not keep large amounts of cash on their premises.
Although this has proven increasingly difficult for businesses due to the changing nature of cash services provided by banks, Sgt Roche said businesses must make the necessary arrangements in order to ensure they are not in a situation where large amounts of cash remain on their premises.
Detective Sgt Shay Keevans outlined the work of An Garda Síochána in stopping criminals from entering local communities from outlying areas.
He referenced statistics in relation to the detection of crimes within the division.
Outlining a success story, he spoke of the recent arrests in relation to theft of copper from sports clubs in County Waterford which had generated huge anger and upset in local communities. He praised the work of Community Alert groups, but pointed out the problem of people seeing something suspicious but reporting it when it’s too late.
He said tackling drugs is a priority and referred to a recent detection of €10,000 worth of cannabis in Bonmahon.
Chief Superintendent Padraig Dunne described Kilmacthomas as a “pivotal” location which is “strategically placed” for meeting the needs of Mid County Waterford.
He highlighted the importance of having the support of the entire community.
“This is a great county and it’s a great time to be living in Waterford,” he said, referencing the Greenway and the eagerly awaited North Quays development as examples.