A recent joint paper from scientists at NUI Galway and the US University of Maine has, surprisingly, not received front-page headlines in this country.
Basically, the experts are saying that the flow of the Gulf Stream is now at its weakest in at least 1,600 years. If the trend continues, Ireland and Britain could experience a sudden switch to ‘extreme seasonality’ meaning far colder winters and much warmer summers. 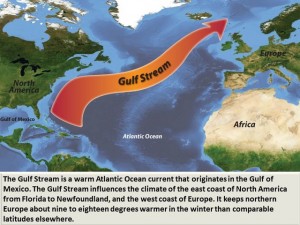 The decline of our year-round moderate climate would have a devastating effect on agriculture and create many other problems we currently don’t have to face during our winters and summers.
Such climate-change events are believed to be as a result of the weakening of warm ocean currents such as the Gulf Stream that transport tropical heat. There are many reasons for such changes in our climate including sunspots and global warming caused by mankind’s pollution of the planet we live on.
The idea that sunspots affect Earth’s climate is still largely debated but it is believed that the increase of spots on the surface of the sun can reduce the amount of energy and light distributed to Earth. This decrease in energy can result in colder weather and even ‘mini ice ages’ on parts of Earth that are furthest from the equator.