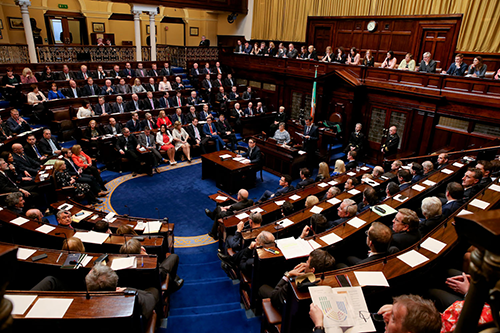 The situation regarding Dail voting is far from satisfactory.Perhaps there needs to be a better system, but it also requires better monitoring to stop this double voting and abuse of the system.We can recall an Irish MEP who had himself signed into the European Parliament and claimed attendance money, even though he was not present.Perhaps there needs to be some sanction if it happens again.Suspension of a week from the Dail with loss of pay would be quite a deterrent or the non-allowance of some travel expenses could be a lesser punishment. We look with concern and some bewilderment at the goings on in the House of Commons and Brexit as it affects Ireland, but at least they seem to get the voting numbers correct.

However, the UK in the past also had problems fictitious expense claims.We note that the various TDs guilty of the Dail voting issues have apologised, which is good and they have not gained anything personally. However if the latest opinion polls are to be believed, Fianna Fáil’s four-point drop in the aftermath of ‘Votegate’ is a concern for the party. TDs we hope from now on will not be able to take part in double voting or voting for a friend, which will now be seen as unacceptable. It seems incredible that even Cabinet members admit to doing it, while in another area of the Dail.
It shows there is a real lax in standards among TDs and maybe it is time that Dáil records did attendance counts in the Dail, where people clock in and out.If it happened in the work place that people clocked in other staff, there would be serious repercussions. It would also be against employment law. It has happened in industries in the past and probably still goes on from time to time, where people go absent without leave. The Dáil seems to have a similar problem and the excuses offered are not good enough. The “it will do attitude” seems still prevalent.
There are probably better procedures in other parliaments in Europe that could be examined and perhaps the best elements of them could be brought into Ireland and the Dáil.The outcome of the whole debate seems that we will have better practice and a major report has been done.Maybe, we could also have better attendance rates in the Dáil too.On TV you see at times the Dáil almost empty as various TDs or Ministers speak. Is it not time to sort this out also in the review of the Dáil workings and build extra trust among the public.
We can always improve on things in democracy as there is a trend more autocratic systems in other countries, we should mind our system.Maybe the Speaker in the Dáil or Ceann Comhairle, could take a tougher approach in the future on these matters.
At the end of the day he has much responsibility for Order in the Dáil.