Over the recent Bank Holiday Weekend I found myself in mixed age company that, as well as old codgers like myself, also included some yummy mummies and trendy cool-dudes in their 20s and 30s.
For a while the conversation moved around the pros and cons of website dating and I had nothing to say because all that sort of thing is a foreign country to me.
However, during a lull in the conversation, one of the beautiful people glanced at me, fluttered her eyes and said: “Gosh, now I remember. Didn’t somebody once tell me that you were in one of those showbandy-thing groups that played in big, drafty old halls where thousands of people sort of, like, fought each other to dance?”
Suddenly, all the young eyes were on me looking at me with interest for the first time. “Golly, look, a real live dinosaur!” Remember, a lot of the people in question drink in ‘bors’ and drive top of the range ‘cors’! 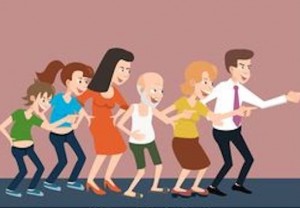 What I should have done was laugh, wave a hand dismissively and pretend that I didn’t know what they were talking about. But I didn’t. I couldn’t resist the temptation of an audience and an opportunity to tell them what they were missing out on. Wrong, wrong, wrong.
Over the years, I have been able to write jokes that people chuckle over but I can’t TELL a joke to save my life. Well, for the first time ever, I experienced what it must be like to be a top, stand-up comedian able to keep an audience in stitches. Mind you, in this case, I’m not sure whether all the sweet young things and their hip partners were laughing with me or at me.
I told them about The Olympia, The Atlantic, The Silver Slipper, The Rainbow and The Premier and how all the single men would be on one side on the hall and all the single women on the other. They thought that was hilarious and even more so when I explained about the rush across no-man’s land when a new set was announced, especially for the ‘slow ones’ or ‘lie-ins’ as they were called.
But what really had them on the floor begging for mercy was when I explained how the elusive ‘claim’ was instigated and cemented. At the end of one set (three songs), if you fancied your chances you asked the object of your admiration if she would like to have the next dance. If she said ‘No thanks’ that was grand and you returned to your side of the hall ready to start again. But if she thought ‘Maybe’ she would say ‘Yes’ and you enjoyed each other’s company for the next three songs. Then came the crucial question: “Would you like a drink?” If she said ‘Yes’ off you both went for a Jaff Ora orange juice (very sophisticated at the time) and a club-milk biscuit bar. You, my son, had claimed!

By this time my young friends were in mild hysterics rolling about the place and when I tried to tell them how good the bands were, they totally collapsed into tears of mirth. It was my own fault. I should have known better and I saw the looks of pity and ‘I could have told you so’ in the eyes of the other oldies present. Mustering as much dignity as I could, I told them all to ‘Feck off’ and stormed out. Snotty, ungrateful shites the whole lot of them!