Home » Opinion » Tales of the Tellurians » Did the Irish invent rugby?

Did the Irish invent rugby?

It is amazing the arguments people get into in pubs about things that don’t really matter.
It seems that following Ireland’s fabulous win over England at Twickenham the customers at a certain establishment took to discussing the origins of rugby and one guy was adamant that it originated in Ireland and that he read that fact in The Munster Express many years ago.
Unfortunately, for me, one of those involved had my phone number and was most disappointed when I couldn’t settle the argument there and then.
Well, I’ve looked it up and I think our friend was referring to an article written by Julian Walton in our Christmas Supplement over 13 years ago. Julian had originally used this piece on WLRfm earlier in the year in his ‘On This Day’ slot. Read it and make your own minds up: 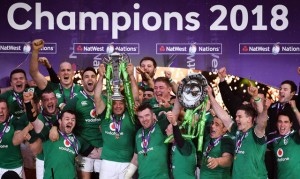 Ireland's Grand Slam victory has rekindled the debate over the origins of Rugby Union.

“In the year 1823 a sixteen-year-old pupil at Rugby School named William Webb Ellis was one day engrossed in a game of football. In his excitement, instead of kicking the ball he caught it in his hands and ran with it. His schoolmates – so the story goes – were at first appalled by this lack of good manners, but later thought: “Hmm, what a good idea!” – and soon they were all doing it. Thus Rugby Football was born.
Now, there is a theory that young William was in fact Irish, the son of a Tipperary landlord. During his holidays he would play with the tough peasant boys on his father’s estate and they played football Irish-style. That’s why on that famous day, while disporting himself with his equally tough English schoolfellows, he ran with the ball in his hands. So – did the Irish invent rugby? Let’s look at the facts.

William Webb Ellis was the son of a soldier in the First Dragoon Guards. In 1807, the year of his birth, the regiment did serve in Ireland – at Dundalk, Clonmel, and Dublin – so young William could well have been Tipperary-born. However, in the following year it was posted to the regimental depot in Manchester and thence to the war in Spain against Napoleon.
When little William was only four, his father was killed at the battle of Albuera where, incidentally, the allied force was commanded by General Beresford, son of the 1st Marquess of Waterford. The widow Ellis and her two small boys went to live in Rugby, where in due course William – being a town-boy – received free education at the famous public school.

When he grew up, William was ordained into the Church of England. He proved to be a typical Victorian clergyman, preaching fiery sermons denouncing the errors of the Church of Rome. He took no further interest in football and died at Menton in south-eastern France totally unaware that he had achieved immortality as the inventor of rugby.

So, did the Irish really invent rugby? Hardly. William Webb Ellis may have been born in Ireland but you will note that he is buried in France and, indeed, the French Rugby Federation lovingly tends his grave at Menton where he died in 1872.