Home » Opinion » Foley on File » Down to the Shed

Down to the Shed

Waterford Estuary Men’s Shed was officially opened in Passage East on Friday last.
The official opening of Waterford Estuary Men’s Shed took place in Passage East on Friday last.The Shed, which is a welcome addition to this area of East County Waterford, has received huge support from the community and many locals were on hand to join in the celebrations last week. A Men’s Shed is a place where all men, regardless of age, background, or ability are respected, valued and belong, and can comfortably use and pass on their practical skills and knowledge.The Men’s Shed offers a place where men can come together and help out in their communities; have a chat and a cuppa; and improve their own wellbeing by keeping physically, mentally and socially active.The Men’s Shed movement, which has already proved hugely successful, recognises that each man is a teacher and a learner, each having different levels of skills (professional and practical) to share collectively.Members of Men’s Sheds consist of men who are unemployed, retired or employed and have spare time on their hands and membership is open to anyone over the age of 18 which means there is an impressive intergenerational mixture. 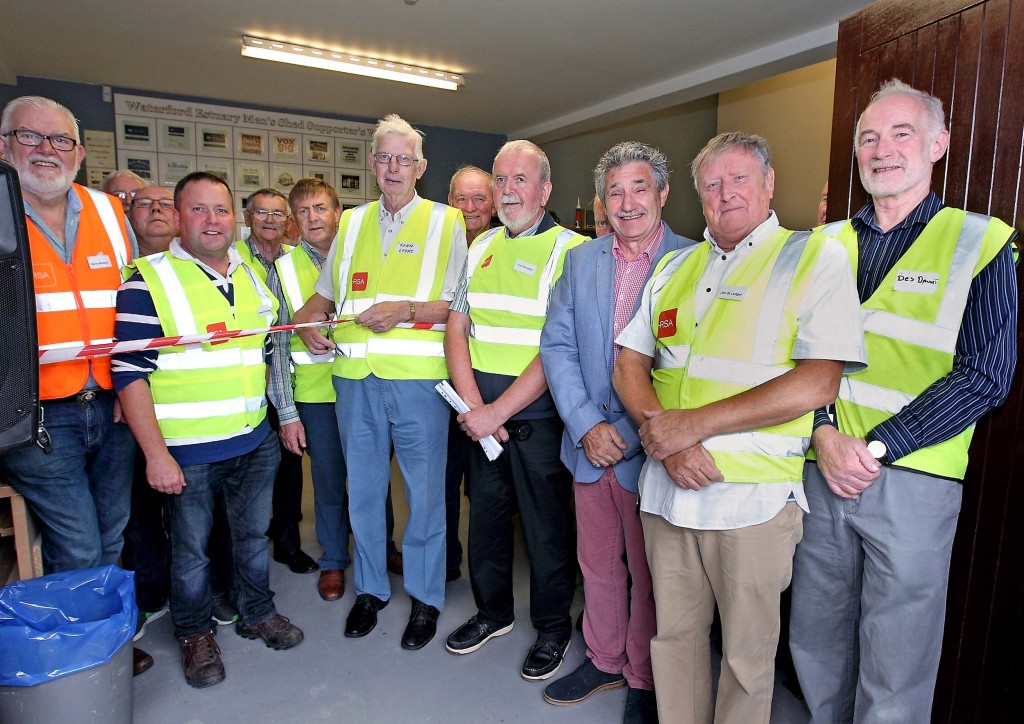 The Shed is not a service organisation and the ethos is very much on self-help and learning from each other, with each Shed seeking to enable members to become self-reliant, creative and self-motivated. Activities which are undertaken include conversing with other men, participating in community regeneration projects and learning skills that will overcome their dependency on others.
Members are provided with information and training in the areas of Social Enterprise, Leadership Skills, Group Facilitation, Community Development, Health and Safety, and Policy Development.
The Waterford Estuary Men’s Shed already has members from a variety of backgrounds and with varied interests. The direction which the Shed has taken has been influenced by the success of a number of very successful Men’s Sheds in Waterford.The Dungarvan Men’s Shed has set the bar for what can be achieved and has won numerous accolades since its establishment over five years ago.
Meanwhile, the Déise Men’s Shed, located at the Six Cross Roads Business Park, has been going from strength to strength since opening last year.
Members from both Dungarvan Men’s Shed and Déise Men’s Shed were present in Passage on Friday last for the official opening of the Waterford Estuary Men’s Shed and to lend their support.
Preparations for establishing the Waterford Estuary Men’s Shed began in the summer of 2017 when a need was identified for a Men’s Shed in this corner of East County Waterford.
However, the committee behind Waterford Estuary Men’s Shed didn’t want to limit the Shed to one particular village. Although based in Passage East, Waterford Estuary Men’s Shed covers a large catchment area from Knockboy on the outskirts of Waterford City to Dunmore East, incorporating areas such as Faithlegg and Cheekpoint along with Ballyhack in County Wexford.
There is a rich heritage to tap into throughout the area covered by Waterford Estuary Men’s Shed, particularly in relation to fisheries.
Undoubtedly, it’s the enviable location of this Men’s Shed which sets it apart from all others.The Shed is located in the former Pilot Station building which had become available and was given to the community by the Harbour Board. However, finding a location did not come about easily as the committee had spent around four months looking for a premises and encountered many difficulties.
“We were nearly at a stage of asking if we could actually pull this off at all,” admitted member Noel Shanaghy. “In a town, there may be more empty buildings but in a rural area there aren’t so many. We called ourselves a Men’s Shed but we didn’t have a building so officially we didn’t exist as we couldn’t join the Irish Men’s Shed Association until we had a premises.”
Chairman John Lyons explained that they were actually exploring the possibility of putting a few containers together. 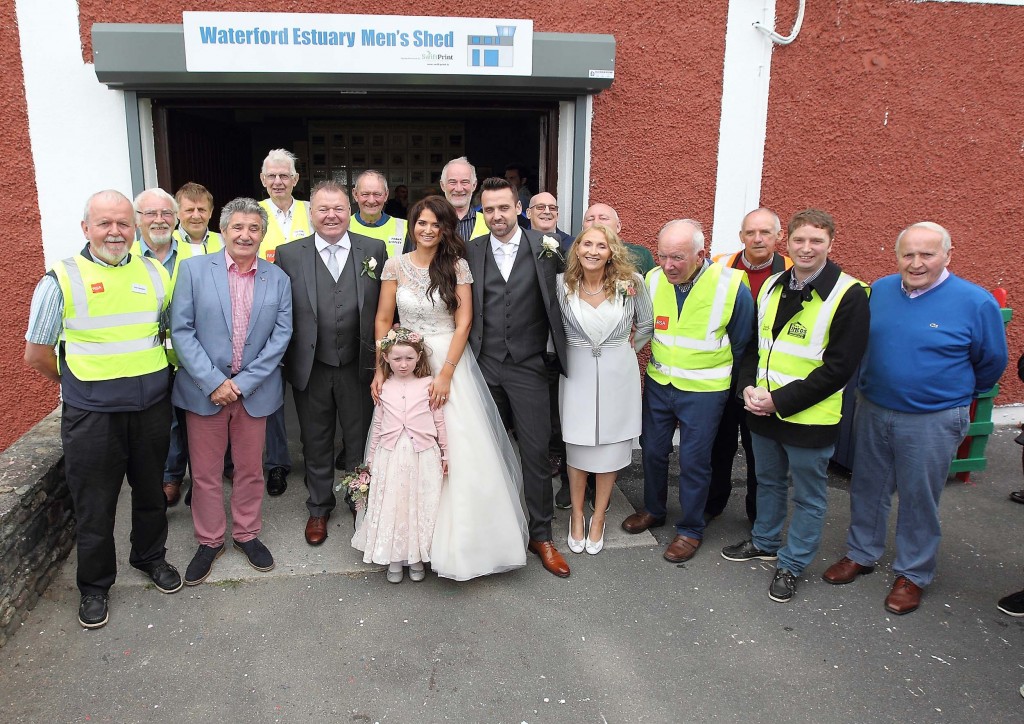 The opening of the Waterford Estuary Men’s Shed in Passage had a few surprise visitors to their opening on Friday last when Men’s Shed member Pat O’Neill brought his daughter Danielle Ryan and her new husband Neil Ryan over to the opening before heading to Faithlegg House Hotel. Also included in the wedding party were Imelda O’Neill and Mollie O’Rourke. Photos: Noel Browne.

They then received word that the Pilot’s building was becoming available and was being given to the community by the Harbour Board. “This came at an opportune time, so we grabbed it,” said Noel.
“The building is ideal and fit for our purpose.”Their impressive building means they have ample room to engage in a variety of activities.
Throughout this year, the men have been hard at work fitting out the premises. The result is hugely impressive and the efforts which have been put into making the building a suitable Shed could be seen by all in attendance last Friday. A number of elderly locals climbed the stairs of the building on Friday last and said that in all their years in the area they had never before experienced the aerial view of the estuary and were amazed at how much could be seen from the impressive vantage point.
Minister of State John Halligan TD was present at the opening while Fr Brian Power PP was on hand to bless the Shed. Noel Shanaghy is keen to highlight that Waterford Estuary Men’s Shed will not be a standalone entity but part of the wider community. “Apart from looking after the men and giving them something to do, we can do things for the community as well,” he said. Waterford Estuary Men’s Shed member Tommy was displaying a framed prescription at Friday’s official opening.The story behind the prescription perhaps perfectly sums up what a Men’s Shed is all about.
Tommy worked as a cook at sea but returned home after deciding to take early retirement.However, he found that adjusting to his new lifestyle proved quite challenging. When he brought his wife to the doctor for a check-up, Tommy was asked how he was feeling. “I said I’m not used to being at home constantly and that I didn’t know what to do with myself,” he explained.
Tommy outlined how he was used to being surrounded by men all his life and having the banter and craic.
In response, Tommy was told that he should join a Men’s Shed. “I said I had heard there was one opening in Passage and he wrote out a prescription for joining a Men’s Shed and said ‘Go’.”
Tommy took the doctor’s advice and hasn’t looked back since. “I didn’t know about Men’s Sheds, I just knew that one was opening here in Passage. I came down and I’m here since,” he said. “Once I met everyone, I felt comfortable straight away.”Even if men aren’t into DIY or manual work, he says they will always find something to suit their tastes. “Somebody will always bring something to the table. I’m no good with screwdrivers and that sort of thing but I’m a chef,” he explained. Tommy now comes down to the Shed twice a week and cooks breakfast every Thursday morning.“By the time you stop laughing, the day is over,” he said.Tommy is encouraging other men to take the first step and to join a Men’s Shed. “Don’t think twice, just go,” he said.
“There is a close bond between all the men and they are genuinely concerned about people. I’ve met some great friends.”