Home » Opinion » Tales of the Tellurians » Eat, drink and be merry?

Eat, drink and be merry?

A well-known Waterford couple were both into their 80s and had been married for over 50 years. He was known to be under the thumb of his bossy wife who had her own reputation of never spending a euro if a cent would do. She controlled the purse-strings and, if he was lucky, her poor doormat of a husband was permitted to visit the pub once a week but only when the special pint price for OAPs was in operation. 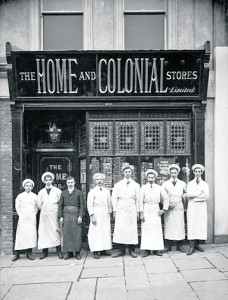 A Group of Workers at the Home & Colonial Store on Borad Street, Waterford May 10th 1910

They were both in very good health, largely due to the wife’s insistence that they only eat healthy food and took plenty of exercise. The poor man’s tongue was often hanging out for a taste of a crubeen and he used to dream regularly about a snack-box with loads of salt and vinegar. His wife refused to relent and he had to go without.
Unfortunately, both were involved in a serious accident that cost them their lives and they ended up together outside the gates of heaven.
Saint Peter made them welcome and personally escorted them on a tour of their new home. He first took them to a beautiful mansion, furnished in gold and fine silks, with a fabulous bathroom that had its own sauna. A maid could be seen hanging their favourite clothes in the walk-in wardrobes and they gasped in astonishment when Saint Peter said: “Welcome to heaven. This will be your home from now on.” The wife asked Saint Peter how much it was all going to cost only to be told that everything in heaven was free.

The old man looked out the window and saw a championship golf-course, finer and more beautiful than any he had ever seen on Earth. Seeing his interest, Saint Peter told him that there were no green fees or membership payments and that he could play everyday if he wished.
Next, Saint Peter took the open-mouthed couple to a giant dining room where a lavish buffet was laid out with every type of food and drink one could think of. “People in heaven are too busy to spend time in kitchens so we all eat in here and, of course, it costs nothing,” he said, anticipating the wife’s next question.
“That’s all very well but where are all the diet and low-fat foods,” said the woman with a sniff.

“That’s the best part,” grinned Saint Peter, “you can eat and drink as much as you like up here and you will never get fat, sick or hung-over.”
The old man emitted a horrible moan and fell to his knees before letting loose the most terrifying shriek of anguish ever heard in heaven. Saint Peter turned white with worry and the man’s wife knelt down beside him, concern written all over her face as she had never before seen such a display of emotion from her husband.
Finally, he was able to catch his breath and turning to his wife, he said: “God blast you and your fecking bran-flakes. If it wasn’t for you I could have been up here years ago.”