We still don’t know the exact date but it won’t be long until we are into the hectic swing of a general election. Hip, Hip, say some while others hold their heads in woe.
Of course, with so little between the parties in the opinion polls (taking the degree of error into account) you would need a crystal ball to predict the outcome at this stage. That said, there’s no shortage of people chancing their arms so I might as well add in my tuppence worth! 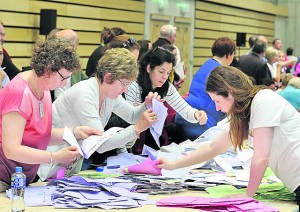 Neither Fine Gael nor Fianna Fail is likely to achieve an overall majority so, really, the best you can say is that we are likely to see Fine Gael or Fianna Fail as the senior partner in a coalition. Both parties are likely to see former members running as independents in a small number of constituencies and that could cause problems for their official candidates and final number of TDs.

But there are some fascinating things to watch. Leo Varadkar has never won an election as Taoiseach so he will either consolidate and strengthen his position or, maybe, find himself vulnerable to a leadership challenge.Will the Green Party continue its upward surge and, even if it does, will it result in extra seats? This will be a crucial election for Mary Lou McDonald and Sinn Fein. Success could see them in government while a slip in the polls could see a heave against the leader.

Then there is The Labour Party that hasn’t fully recovered from its time in government during the banks crisis and the austerity that ensued. There are signs of a revival but will it come in time? It is probably Brendan Howlin’s last election as leader if they don’t do well.
Smaller parties and independents will, no doubt, account for some seats but many are in marginal constituencies and even a small swing against them could greatly alter the look of the next Dail.

And so to Waterford where, for the first time in almost 40 years, there will be no Austin or John Deasy on the Fine Gael ticket. Former Minister, Senator Paudi Coffey of Fine Gael, was looking quite strong but shocked everybody with his decision to retire from politics. That leaves at least two possible newcomers to the Dail to carry the Fine Gael banner, Councillors Damien Geoghegan and John Cummins. The party has also asked Councillor Liam Brazil to stand but, as I write, he has not made a decision on whether or not to accept.

All are strong in their respective parts of the county and John Cummins is the first Fine Gael city candidate for some time. The late Eddie Collins held a seat for many years and John’s father, Maurice, was an unsuccessful candidate as was Katharine Bulbulia but both later served in the Senate.

Last time out, Mary Butler, now Junior Spokesperson on Older People & Public Health Promotion, was the sole Fianna Fail candidate. This time she is joined by Councillor Eddie Mulligan but both are strongest in the city and East of the county so there is work to do in the West. It’s highly unlikely though that Fianna Fail won’t take a seat and incumbent Mary Butler appears to be in pole position although there is said to be a big push behind Eddie Mulligan.
Sinn Fein’s front-bench spokesperson, David Cullinane, will be strongly defending his seat and should be returned. Minister John Halligan (Independent) has yet to announce whether or not he will run again. If he does, he should be returned but if John Halligan doesn’t contest the election where will his No 1s go?

Dungarvan’s Councillor John Pratt will be Labour’s candidate and, of course, the party had a Dungarvan TD before in the late Tom Kyne but, at the time of writing, John has a steep hill to climb. He’ll get plenty of No 2s and 3s but he’ll need enough No 1s to stay in the race and make the lower preferences count.

The Green Party will be represented by Councillor Marc Ó Cathasaigh from Tramore who should be a force to be reckoned with, especially with Grace O’Sullivan MEP in support. Then there will be other smaller parties and independents trying their luck. But, at the end of the day, there are only four seats. Good fortune and comfortable shoes to them all in the long slog ahead.