Part Two
Emma Nolan is one of the south east’s emerging broadcasting talents, and she filled us in on her burgeoning career with Beat 102-103 recently.
“I’ve been presenting ‘The Takeover’ with Beat since September 2015. I am privileged to work on a show that allows so much of my own creativity and enables young broadcasters to take risks and try out new things,” she began.
“‘The Takeover’ is all about presenter and listener interaction and that is guaranteed on the show. It still amazes and delights me how many listeners pick up the phone to text in for simply a shout out – it always ensures a good buzz when you hear your name on the radio, I don’t think that will ever change! – offer their opinion on a young person’s problem or simply and probably most commonly, to be random and have the craic.
“The show produces some gems in terms of things not going to plan and taking drastic turns- at night-time it seems everyone just wants a laugh after a long day of school, college or work and Takeover listeners never let you down in terms of entertainment! Even thinking back on 2016, we’ve had lads on claiming to be the fastest men in the region at delivering post, rap battles, live Tinder dates, farmer updates and even a marriage proposal! You never know what’s going to happen when they come on air and I love that so much.”
Emma continued: “The evolution of social media and the break through of Snapchat has also changed the way youngsters listen to radio. I would say a good 50 per cent of all listener interaction between 7am and midnight comes from Snapchat. What’s exceptionally wonderful about it is that for the first time, presenter can now physically see where their listeners are listening- I’ve seen them listening in a tractor in the middle of a deep, over grown corn field, hopping around fields to ‘Cotton Eyed Joe’, bouncing on their beds to ‘Little Mix’, even listening at 40,000 feet on a trans-Atlantic flight.
Snapchat also gives them the ability to send in audio, without having to come on air, which can be a relief to those who feel shy. This has created the most funny and random clips of audio that I love playing on air!”
Emma said she tries to cover “all things” on the show, from a chart countdown, (The Top 7 at 7), #KantKopeMonday, “which allows them to have a rant and a moan on a Monday about all the rubbish things that happened to them that week; we play ‘Class Tracks’ which is a feature involving getting nostalgic and reminiscing on the year they started secondary school with a look back at their first kiss/ disco and playing one of the big hits from that year.
“We also do ‘Confessions For Emma’ on a Thursday where I ask them to confess to the bolder things they’ve got up to over the years; as you can imagine, this too creates some hilarious stories.”
Presenting ‘The Takeover’ has led Emma to take on some interesting challenges. “This year I returned to my former Secondary School, Blackwater Community School in Lismore, to study for my Junior Cert exams. Listeners to the show challenged me to re-sit my exams and after an overwhelming vote in favour of the idea on Beat’s social media, that is exactly what I did. 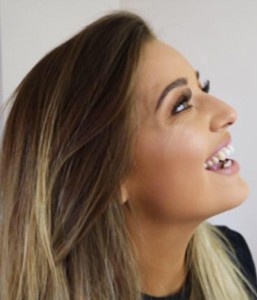 “Not only was it fun to get back to my old school and catch up with former teachers who were so helpful throughout the whole process, the experiment also highlighted the intense pressures that are on our teens with these State Exams. It created a wonderful ‘togetherness’ on the show throughout exam time, which was really lovely. I’d say I’d do it again, but actually, I think doing it twice is enough.”
Among the “semi-regular” contributors to the show, (“whenever she feels up to it really!”), is Emma’s Grandmother Phyllis.
She started coming on the show last year to offer her opinions on all things 2016 and modern; we talked modern slang words, modern song lyrics from songs on Beat’s playlist, (you can imagine her confusion listening to Fetty Wap’s 679), she had a look through Tinder and rated her favourite celebrities! Not only was this incredibly entertaining, it’s also audio that my family and I will have forever which is invaluable and very special. She still makes the odd appearance on the show, but wanted a bit of a break from the ‘Phyllis With Knowledge’ fame, so we’ll hopefully come back to it at some stage soon.”
Emma said that Beat is fighting for “new young ears” to tune their way.
“In 2016, there are so many other options available to our teenagers, in the form of Spotify, Netflix, YouTube etc, so it’s a massive compliment and incredibly encouraging that so many of our teenagers still want and need that night time companion and friend. I remember when I was a teen I would religiously listen to Beat in my room with my sister every night; it was an integral part of our day and how we discovered new music and felt a real connection to the presenter. It seems many still do the same. My main aim is to connect with that one individual person and make a real relationship with those who listen.”
So what’s Emma like outside of work? “Well, I’d consider myself spontaneous and adventurous. I love having a laugh and meeting new people, getting to live gigs, etc. I love random drives, walks and adventures. I’m only 23, so my social life is huge to me at the moment, which I guess is okay too… I’m enjoying myself! I think my friends know that I’ll always be up for a good time and would spontaneously head out at the drop of a hat.”
Originally a Dub, Emma considers herself a proud Déise girl. “My family left Dublin when I was six, so most of my rearing was in Ballyduff Upper! We embraced country-living and I spent much of my childhood up woodlands and cross-country on ponies, helping out on a neighbour’s sheep farm and I even gave Gaelic Football a go, which I was utterly useless at! I remember my Dad’s exhausted looking face after standing on the sidelines watching me play and would often ask me after a game why I would let my sub get the ball and I would tell him how she is my ‘new friend’ and we ‘took it in turns’ when the ball came our way!
“Yeah, football wasn’t for me. Most sports weren’t for that matter, although I was hugely into horse-riding and was actually good at it. One of my big regrets is selling my pony when I joined secondary school. I was going through the ‘boy’ phase and temporarily lost interest. One day I hope to properly get back into it, you can’t get that sense of freedom and adrenaline from anything else! Separately, I gave basketball a crack in secondary school, which I was ‘satisfactory’ at, but really enjoyed!”
She continued: “I started secondary school in Lismore where I met friends that I’m still close to and see regularly today. It was then I realised my love for all things creative; art and English and also had a real grá for Irish. I miss the messing and the laughs and would love to get back to school. As cliché as the expression is, they really are the best days of your life!
“I love living in Waterford City now. I’m a huge water-dweller and find it crucial to have the sea nearby! The nature of my show means my working hours are a little different to others, so I have afternoons free and begin my shift in the evening and work until around midnight. It’s great to have friends that work shift work too, so if I’m not in the gym or running errands, you’ll probably find me in the afternoons in Tramore or walking the cliffs in Dunmore. I love the Waterford coastline.”
Emma, who has also started DJ-ing in recent months, concluded: “Overall, I’m loving what I’m doing and looking forward to an exciting 2017 on the show.
There is a family-like bond here at the Broadcast Centre, which may sound like a cliché, but my colleagues have become cherished friends of mine. Everyone wants the best for each other. I’m lucky to be surrounded by great people and to be doing a job that I am loving.”