Newly elected President of the ICSA, Fenor man Edmond Phelan, says farming is under attack as a result of climate change, the rise in veganism and excessive profiteering. Additionally, the industry is threatened by the controversial Mercusor deal and the uncertainty surrounding Brexit.
Waterford man Edmond Phelan was recently elected President of the Irish Cattle & Sheep Farmers’ Association (ICSA). In a hotly contested vote in Portlaoise last month, he defeated ICSA Animal Health & Welfare chair Hugh Farrell and the association’s Vice President for Munster Dermot Kelleher.
He is the first Waterford man to hold the voluntary position.
Born and bred in Fenor, he is married to Frances and the couple have two daughters and one son.
A former beef chair of the ICSA, Edmond has already assumed his new position – and there has certainly been no shortage of issues to address in what is an incredibly challenging time for farming and, more specifically, for beef farmers. Edmond admits the beef industry is constantly lunged from “one crisis to the next”. 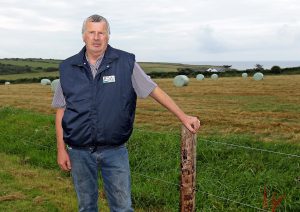 Edmond Phelan pictured on his farm near Fenor.

“You could have one good year and three bad years,” he says.The uncertainty surrounding Brexit, and the EU’s trade deal with the bloc of South American countries known as Mercosur, are among the major challenges facing the sector.“We don’t have a moment to spare when it comes to preventing a disastrous Mercosur trade deal for Irish beef farmers,” he says. “The ICSA is vehemently opposed to any Mercosur deal that includes a tariff rate quota for beef.”
He has described such a deal as being “economically devastating for Irish beef farmers”. In his first pledges as President, he singled out ensuring that the €100m EU beef fund gets to the “most deserving farmers in short order” as being of equal importance to the Mercosur deal. “Farmers in the cattle sector have endured a really difficult period and it is urgent that the money is paid to those farmers without them having to jump through any more hoops,” he said.
“For this reason, ICSA will continue to oppose any conditionality attached to accessing this fund.”
Within the past week, he has welcomed clarification on the division of the €100m fund in Beef Exceptional Aid Measures, saying that the objective now must be to get the money to farmers promptly.
“The money must be distributed as quickly as possible. We are disappointed that EU funding rules say it can’t be paid until 16 October, but we see this as the latest acceptable date for funds to arrive in farmers’ accounts,” he says.
“The beef trade is deteriorating every week and this fund is only a drop in the ocean compared to the losses being sustained by farmers.”Last week, US President Donald Trump hailed a deal to sell more American beef to Europe – a move which farmers have described as another example of beef farmers being sacrificed for other sectors.

Edmond Phelan speaking after being elected President of the ICSA.

Climate challenges
Climate change is another one of the biggest challenges facing agriculture, and Edmond Phelan says it’s “farcical” that the EU should expect Irish farmers to “adopt a broad array of climate change measures while they ignore the massive climate change and environmental downsides of importing vast quantities of beef from South America.” “It remains an ICSA priority that Irish beef farmers are protected. We do not accept that bringing in vast quantities of sub-standard beef from South America is in anyone’s best interest,” he says.“It is beyond hypocritical in terms of climate change and reprehensible in terms of its potential to destroy the livelihoods of countless European beef farmers.”He believes the ICSA needs to “turn the debate on climate change towards policies which recognise the positive contribution of farmers in terms of more renewables”.
“While the Climate Action Plan will be very challenging for the agriculture sector, farmers will always respond to the right incentives,” he says. Although he admits that there are emissions associated with agriculture, he is adamant that farming is not the main issue. “Farming has been going on for thousands of years,” he says. “Fossil fuels are the cause of climate change.” He believes the ICSA can play a key role in addressing issues in collaboration with others and says the Greens are the first port of call.
“They have to show their real Green credentials if they are serious about helping the environment,” he says. He met with local Green Party members last week and hopes to meet and interact with Greens at EU level in the near future.“If we get them on side, it’s a start,” says Edmond. “A lot of Independents are also of the same view as ourselves.”
While agriculture is sometimes conveniently painted as the main villain in terms of the climate change debate, he says farmers and those living in rural areas are willing to embrace and address ‘green’ issues.
He says many rural areas have already engaged in innovative environmental measures, citing the Fenor bog, which has won many plaudits for conservation, as an example. “Do we cut down on air travel? Do we cut down on car travel? People have to make choices. The government can’t stop people travelling unless they put extra taxes,” he says. “It’s easy for students to go out and march but it comes down to personal responsibility.”
Farming under fire
In addition to specific issues related to farming, the ICSA also addresses issues which are relevant to all rural dwellers such as rural crime and broadband provision for example. Edmond recently featured in a national newspaper feature on the issue of coastal erosion. There are also specific ICSA committees addressing tillage, animal health and welfare etc. The ICSA celebrated its 25th anniversary last year and the origins of the organisation, which is based in Portlaoise, go back to disaffection amongst farmers in the beef and lamb sectors who felt there wasn’t an adequate voice representing their interests.
Press and Communications Officer with the ICSA, Neassa Fitzgibbon, points out that the ICSA is a relatively small organisation but she says it’s one which punches well above its weight.“We don’t take levies. We are funded through our membership,” she explains. “We’re a small outfit but we hold our own and we are an important voice for farmers.” She says these are “very challenging” times for the beef industry where there appears to be a “war on meat”. The rise of veganism has resulted in many taking a militant approach towards farming and Neassa is concerned by the level of “propaganda” which now exists. “There is a lot of false and misleading information out there,” she says.
She highlights a recent experiment conducted by the ICSA in order to determine the constituents of a vegan burger.The vegan burger was made in American, packaged in the UK and contained 23 different ingredients from “the four corners of the world”. “It doesn’t make sense,” she says. “People are making decisions because of the messaging. It’s definitely a challenge to try to counter those arguments.”
While Edmond Phelan says he has no problem with veganism per se, he believes proponents of veganism shouldn’t adopt such a confrontational stance. “If somebody wants to be vegan that’s their choice, but I don’t want it rammed down my throat,” he says. “And if they want to be vegan, why not eat Irish produce? Brining quinoa or avocados from Bolivia isn’t going to save the planet.”He is highlighting the importance of local produce and shopping locally. “I always feel people should eat seasonally and not eat strawberries from South Africa in the winter when they don’t grow here.” Neassa points out that Irish farmers have to jump through countless hoops in order to comply with regulations and should therefore be supported and nurtured. “We want to get the message out that we have the most sustainable beef production in the world with the highest of standards.”
Protests
Within the past week, the protests undertaken by beef farmers at ABP Ferrybank, and other locations around the country, have thrust farming issues to the forefront of the national news agenda once again.
“ICSA will continue to lobby for a regulator with powers to examine who makes what profits from farmers’ produce. We believe that transparency at processor and retailer level is now critical and that excessive profiteering off the backs of farmers needs to be exposed,” says Edmond. “It’s a challenging time for farmers so strong leadership is crucial at this juncture. Farm incomes, market security and climate change are all are feeding into uncertainty throughout the whole sector.”He described it as an honour to have been elected to lead the association and said he was privileged to work with outstanding colleagues in the association. “Their dedication to defending the rights of farmers around the country is second to none and I am proud to be part of a great team. It’s time to get on with the job now.”