Festival Fun on the Copper Coast

When you consider we possess such gems as the Comeragh Mountains, Coumshingaun, Lismore, and Dunmore East to name but a few, you realise that Waterford is without doubt a special place.Out of all of our many scenic gems, my personal favourite is the ruggedly beautiful Copper Coast area.
Stretching from Tramore to Dungarvan, the entire area encompasses a beautiful landscape including quaint villages, dramatic cliffs, panoramic views of the majestic Comeraghs, and gorgeous coves and beaches.A relatively small area boasts the wonderful features of the Greenway such as the Durrow Tunnel and Ballyvoyle Viaduct; pretty Fenor with its bog, impressive playground and remarkable ‘Angel of Fenor’ creation; and the hauntingly beautiful deserted mine site at Tankardstown.
It’s clear to see that the Copper Coast has something to satisfy everyone and certainly ranks among the most beautiful stretches of coastline in all of the country – maybe even the world! 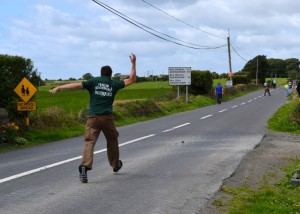 I am still dumbfounded as to why the area was not included in the much talked about ‘Wild Atlantic Way’ tourism initiative which stretches from the Inishowen Peninsula, County Donegal, to Kinsale, County Cork.Why go to the effort of constructing such an ambitious project and then ignore a sizeable area of the country which also borders the Atlantic Ocean? One again, Waterford and the South East (as Wexford fails to feature in the Wild Atlantic Way either) were overlooked.
The ‘Wild Atlantic Way’ is billed as “a route that showcases the sheer magnificence of Ireland’s West coast from stunning headlands and beaches to colourful villages and towns all infused with the history, heritage and tradition of this rugged coastline” – everything that exists on the South East coast also.
While we have been incorporated into the ‘Ireland’s Ancient East’ tourism proposition, I personally feel it lacks the impact and broad appeal of the ‘Wild Atlantic Way’.
On the flip side, our omission from the ‘Wild Atlantic Way’ means all of us locals can continue to enjoy what’s on our doorstep without an extreme number of tourists disrupting our peace and quiet.
However, thanks to the phenomenal success of the Waterford Greenway, many other areas of Waterford are also experiencing benefits – including parts of the Copper Coast.
For example, there is ongoing work in Stradbally aimed at creating more facilities for cyclists and encouraging more Greenway users to make a short detour to the village while travelling on the nearby amenity.The ongoing efforts of the Copper Coast Community Forum, which includes representatives from different community groups from throughout the area, are also having many positive impacts. County Waterford and its assets have never received so much publicity and have recently featured prominently in national and international publications.RTÉ’s ‘Nationwide’ continues to showcase Waterford in all its glory on a regular basis and such coverage is priceless.
While the Greenway has been the obvious focus of much of this publicity, the Copper Coast has also recently received significant coverage in national newspapers as a must-visit tourism destination.

The beautiful Tankardstown area near Bonmahon on the Copper Coast.

The most recent edition of the Irish Independent’s ‘Lineout’ magazine, a bi-annual men’s sports and lifestyle magazine, recommended exploring the Comeraghs and the Copper Coast as one of its top adventures for 2018 – not bad when you consider the list also included destinations in far flung locations such as Zambia!
Travel writer Pól Ó Conghaile has also written extensively about the Waterford Greenway and Copper Coast including an article for National Geographic Traveller.
Of course the profile of the Copper Coast has been heightened since becoming the seventh Geopark in the world in 2001.
The Geopark covers an area of 90 sq. km. including the villages of Dunhill, Fenor, Boatstrand, Annestown, Bunmahon, Stradbally and Kill.
Working with other Geoparks within the Geopark Network meant that the Copper Coast could participate in a number of InterReg projects (2004-14) which allowed a deepening understanding of the area’s rich geological and industrial past and enrich this with the experience of others throughout Europe.
Funds also allowed for the purchase and conservation of a number of key buildings notably the engine house at Tankardstown and the old church at Bunmahon which now acts as the Copper Coast Geopark’s headquarters and as a Visitor Centre housing a café, a craft shop and exhibition dedicated to the area’s rich cultural and geological heritage.
The area’s profile was heightened even further when it was awarded UNESCO Global Geopark status in 2015 – the same status as a World Heritage Site.
The Copper Coast Festival, which takes place next week, will also help further raise the profile of this area.The festival takes place next week between May 25th and 30th with events happening all around the Copper Coast from historical walks and talks in a country house, to surfing lessons and coastal adventures on Bonmahon beach, and road bowling in Fenor.The festival is a chance to experience the Copper Coast at its best over five days this month.
The Copper Coast Festival is also run in conjunction with European Geoparks Week 2018 which is a celebration of local cultures to be found in the 69 Geoparks across Europe. A part of the festival there will also be a local information day for the Atlantic Geoparks Interreg project which the Copper Coast Geopark is a partner in – this event is free of charge and open to all.
This year’s programme of events offers something for everyone:
Friday May 25th A Walk through Time and Nature, meeting at Bonmahon Beach at 7pm (free); Friday May 25th Geopark Visitor Centre Open Day (all day) at the Geopark Centre in Bonmahon; Saturday May 26th Atlantic Geopark Project Information Day 12pm-2pm, Barron Hall, Stradbally (includes a walk in the Holy Cross Church and Graveyard, Stradbally by local historian Tom Hickey); Saturday May 26th Women’s Creative Café 6pm, meet in Geopark Visitor Centre (€5); Saturday May 26th Walk through Time with Edith Collier’s Bonmahon Society, meet in Geopark Visitor Centre (free); Saturday May 26th Plein Air Art Day, Geopark Visitor Centre, 12pm (free); Saturday May 26th SEAR ()South East Amateur Radio) at Tankardstown, all night (free); Sunday May 27th Road Bowling in Fenor, 10.30am (€5 deposit); Sunday May 27th Explore It! Draw It! Eat It! (with seashore expert Bruce McDonald and sand artist Sean Corcoran) Meet at Geopark Visitor Centre, 10am (€10 euro), held in conjunction with the Seaweed Discovery Walk and Lunch (€10); Monday May 28th €1 Evening Surf Lesson, Bonmahon Beach, 7pm; Wednesday May 30th A Lady’s Walk – Lecture at Woodhouse Estate, meet at Woodhouse Estate, Stradbally, 7pm (free).