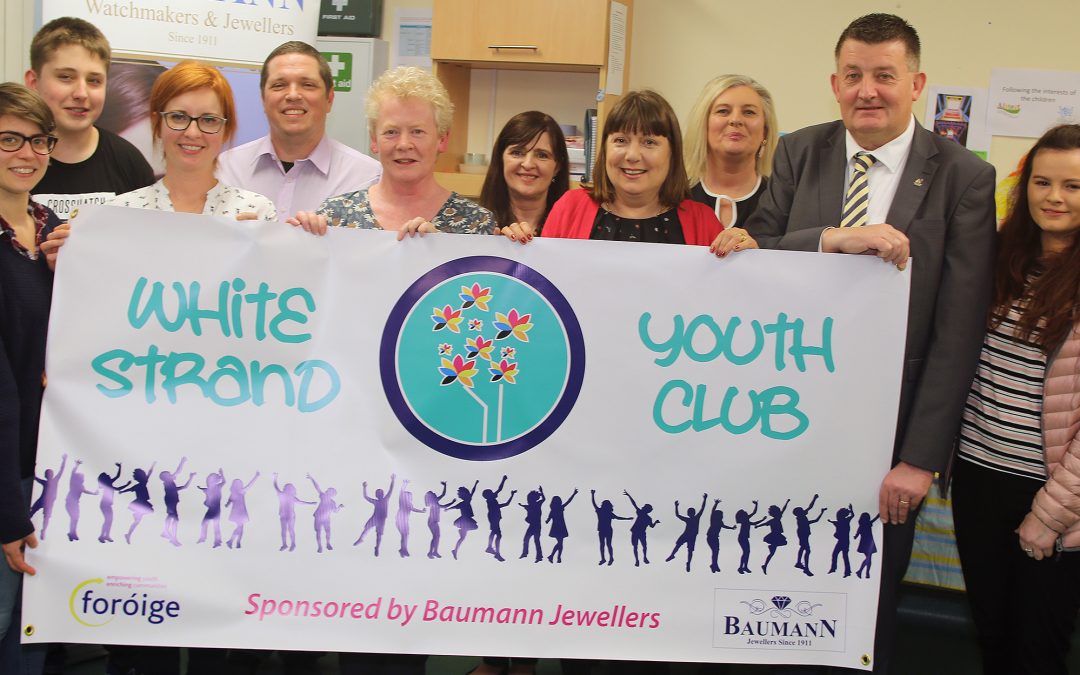 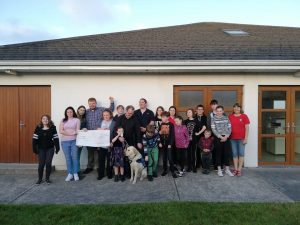 Group pictured at the presentation of a cheque for €700 to the Irish Guide Dogs for the Blind.

In recognition of the fact that young people with autism spectrum conditions can often face difficulties in socialising and maintaining friendships, the motivation behind the creation of the club was to establish a fun, social outlet tailored to the needs of such individuals.The club has gone from strength to strength and marked its first birthday with a special celebration last March. Now, the White Strand Foróige Youth Club has been nominated in the Charity Impact Awards 2019 in the Small Organisation Section.The Charity Impact Awards celebrate the work of community, voluntary and charitable organisations, clubs or groups that have brought about positive change.
White Strand Foróige Youth Club is the only organisation in Waterford and the South of Ireland to be nominated this year.Judges will vote on 66 per cent of the vote but 33 per cent comes from the public vote so all at White Strand are seeking support from families, friends, colleagues, and everyone in Waterford.
Voting is open until November 29th and the Awards Ceremony will take place at the Mansion House in Dublin on December 10th.
Activities
Since The Munster Express profiled this admirable group following their first birthday back in March, the members have gone on to enjoy a very busy and varied time.In addition to their meetings on Friday nights during term time, the group’s members spent a lot of time outdoors and even managed to fit in a couple of events during the Easter and summer holidays. In April, they visited Ballyhass Outdoor Adventure Centre in County Cork which was their first full day trip. They left at 7am and were back at 7pm with some very tired members on a day in which they also celebrated a couple of birthdays. 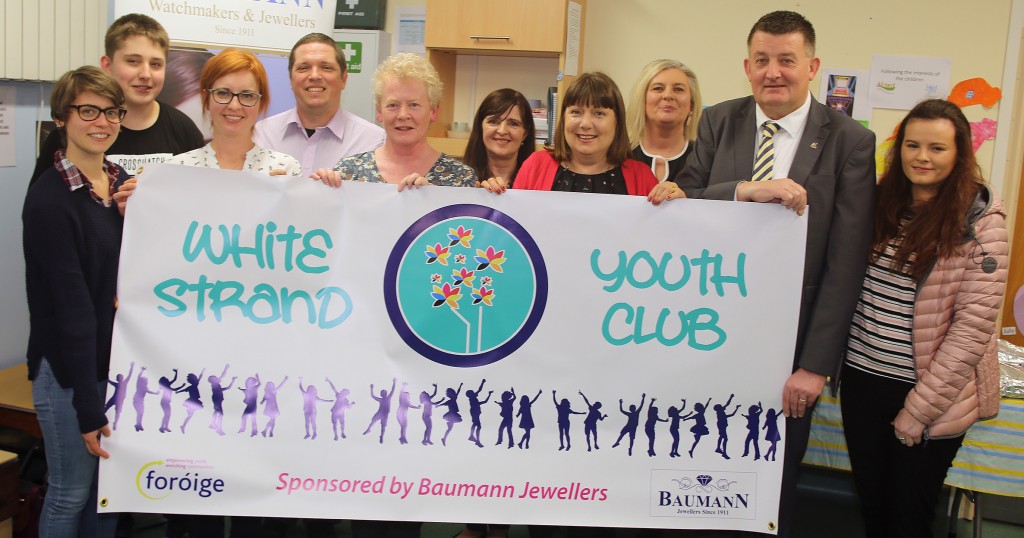 Pictured with the banner designed for the White Strand Foróige Youth Club for Children with High Functioning Autism are club volunteers along with Cllr Damien Geoghegan and Clothilde Mignot, Designer. Photo: Dan McGrath.

In May, White Strand Foróige were invited to the GSK Community Investment Fund reception evening where they received the 2018 Recipient award. GSK’s sponsorship allowed them to take the members to Ballyhass, so all involved are deeply appreciative of their support. On May 10th, they staged a 5K sponsored walk for the Irish Guide Dogs for the Blind and manged to raise an impressive €700. May 31st was the final night of the club year, so they invited members’ families to their first Annual Garden Party during which the cheque to the Irish Guide Dogs for the Blind was presented.
In June, all at White Strand had a very nice surprise when Blackwater Community College in Lismore sent a donation of €200 from the proceeds of their Charity Colour Run. Meanwhile, on June 14th, they held their first Bike Week event. They decided to make it a Walk, Scoot or Cycle event and, although it wasn’t a very nice evening weather-wise, all who participated had a great time nonetheless. All at White Strand are grateful to Waterford Sports Partnership for facilitating the event, Waterford City & County Council for funding the event and Rebike Cafe for providing the lovely food and drink afterwards.
The building used by the club is also home to the Sesame Early Intervention Service and, in June, the club supported the Sesame 5K Fun Walk.In July, Waterford Sports Partnership and the GAA in conjunction with the White Strand Youth Club held the first ever ‘Let’s Play GAA’ Cúl Camp for children with autism.
Because of its success, it’s hoped that this will become an annual event with even more joining in the fun next year. Their final event of the 2018/2019 year was held on August 21st at Waveworld in Clonea where great fun was had.
Origins
The development of the White Strand Foróige Youth Club came about as a result of many parents having concerns about the limited socialising opportunities for their children within the local community.
For many of these families, their children were experiencing difficulties forming friendships and finding a place where their child could be themselves without fear of being seen as different.
Around two years ago, Kara Baumann received a letter from the HSE asking if anyone would be interested in setting up a youth club for children with high functioning autism in conjunction with Foróige.
“I remember that day clearly,” she explained.
“My daughter Ariel was just 10 and I thought about her having somewhere to go; somewhere she might fit in and not be the square peg in the round hole; somewhere she might make a friend and learn how to become a friend; somewhere she might meet children who would come to her birthday party and invite her back.”
She continued: “At the time I had a daughter who had no friends, no playdates and no sleepovers. What I did have was a darling, beautiful, kind girl who watched too much TV and lived in the clouds as it was a nicer place to be.”
Kara said she didn’t “set out” to become a Group Leader of the club but soon found herself in this position.
“It would seem that the club chose me,” she said.“From the moment we started to look into venues and the logistics of running the club, everything just fell into place.” Kara believes strongly in the mantra: ‘ask for it to happen, believe that it will happen, wait for it to happen and say thank you when it happens’. “It would seem that this is the way the club came into being,” she said, paying tribute to the past and current leaders involved with the club. “Looking back, I didn’t set out to be a leader. I set out to make a difference. For me it is never about the role but always about the goal. Apart from having my children Axel and Ariel, I think this is one of the few things I will always think of that I was involved in that has really counted for something.”
Future plans
Other parents have also spoken about the hugely positive impact which the White Strand Foróige Club for Children with High Functioning Autism has had on the lives of their children.All say that their children have benefitted hugely from the activities which are aimed at developing their communication skills, emotional connections, social interactions and physical activity.
The leaders at White Strand have noticed some of the children who were quiet and shy at the beginning have become more confident. They talk, share ideas, experiences, everyday news, what happened at school or at the weekend.The club re-opened for the 2019/2020 year on Friday 6th September and all involved are currently enjoying another year of great fun and friendship.
There are many exciting events planned for the coming months – and all are excited about the possibility of scooping an award at the Charity Impact Awards!
For more information on the club, email whitestrandforoige@gmail.com or call Kara Baumann on 087 6104430. Visit their Facebook page and follow the link to vote for the club in the Charity Impact Awards 2019.