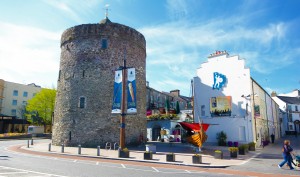 WATERFORD’S Viking Triangle was named “Great Place” winner at the 2017 Urbanism Awards in London last week. Of course all of us Déise folk already know that Waterford is a “great place”, but it’s nice when others sit up and take notice of what we have to offer.
The Urbanism awards aim to recognise the best, most enduring or most improved cities, towns, streets and places, and the Viking Triangle beat off stiff competition from Greenwich Market and Leicester Market.
The awards are voted on by leading architects, planners and developers across Ireland and the UK.
In their comments, the assessors noted that the Viking Triangle is more than a traditional physical regeneration initiative and has enhanced the quality of life and competitiveness of local business.
Our Viking Triangle certainly is the jewel in our city’s crown and boasts a vast amount of history thanks to the Bishop’s Palace, the Medieval Museum and of course nearby Reginald’s Tower.
I recently visited the States and, while thoroughly enjoying every minute of my holiday, the enormity of the assets which we have on our own doorstep was reinforced as I pondered on the fact that most Americans would dearly love to have the vast history which we in Waterford can lay claim to.
During my visit Stateside I stopped off in cities which were only 200 years old but still classed as being “historic”. 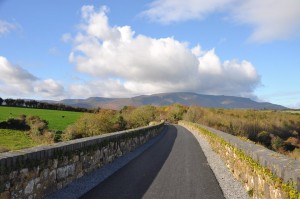 The Comeragh Mountains viewed from the Waterford Greenway in Kilmacthomas

While these cities may be historic in their individual way (and of course they are to be commended for promoting whatever history they do have) their historical assets are not in the same league as Waterford’s attractions.
Waterford is Ireland’s oldest city at a staggering 1,102 years old!
The enormity of this becomes apparent when you compare this longevity to New York which is less than 400 years old and Los Angeles which is less than 250 years old.
Because we have all grown up hearing so much about such US cities, you could be forgiven for thinking they have been in existence for much longer.
Another asset which I believe we often underestimate here in Waterford is our world famous crystal brand.
The Viking Triangle is home to Waterford Crystal which is one of Ireland’s most recognisable products.
Just how famous this brand really is was also abundantly clear during my recent trip as every American I met, regardless of age, was aware of Waterford Crystal.
The huge asset which this is for our county cannot be underestimated.
I’m sure counties such as Longford, Westmeath or Sligo for example would love to have a brand which generates such instant recognition.
While they may have their own famous sons and daughters, they can’t claim to possess a world renowned brand which also includes their name.
Although Waterford Crystal is sadly not manufactured in the city on the scale which it once was, it will always be inextricably linked with the Déise.
It’s often only when we receive recognition from outside Waterford, and when we visit other destinations, that we actually sit up and take notice of what we have on our own doorstep.
Often, after returning from a visit to a different location, I try to put myself in the mindset of a tourist visiting Waterford.
What would attract me to visit? Where would I stay? What would my impression of Waterford be?
Thankfully, there are plenty of options for tourists visiting the Déise.
The status of our Copper Coast Geopark (despite being disgracefully overlooked for inclusion in the Wild Atlantic Way) has continued to strengthen.
Meanwhile, the Waterford Greenway is beginning to attract significant national attention across all forms of media.
The Greenway truly is a game changer and showcases areas of Mid County Waterford which previously had not been on the radar of tourists.
And who needs Alaska or the Alps when you consider the spectacular sight of the snow-capped Comeragh Mountains which we were treated to last weekend.
But we can’t expect visitors to flock to these locations if we do not visit and promote these attractions ourselves.
And while not wishing to detract from the Viking Triangle’s fantastic award, we must also recognise areas of the city which need more attention.
The Viking Triangle has progressed rapidly and has been transformed – but other areas of Waterford city centre have been overlooked for far too long.
Areas such as O’Connell Street, The Glen and The Quay can sometimes feel a world apart from the Viking Triangle – just ask any of the businesses operating in any of these areas.
We should certainly embrace all of our assets and promote all of our attractions, but we should also remember that there is still some work to be done in making ALL of Waterford an appealing place to visit and in which to live.