Home » Opinion » Foley on File » A trip through the trenches

A trip through the trenches

Kieran Foley explored Waterford’s connections to WWI on a recent visit to Flanders and the Somme
THE grave of Private John Condon is the most visited grave in Poelkapelle Cemetery which is located near Ypres in Belgium.
On a recent visit to the sites associated with the First World War across Belgium and France, I had the opportunity to visit the grave of the Waterford native who died in Flanders in 1915.
On a freezing cold day, in the wide, open expansive lands of Flanders, I imagined the conditions which must have been endured by those who fought in WWI. 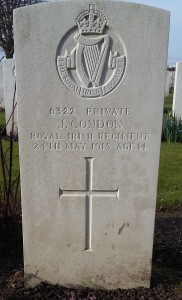 At first glance, John Condon’s grave is not distinguishable from the rows and rows of identical white headstones which are located in the expansive cemetery.
However, the inscription on his headstone clearly differentiates him from all those buried around him: ‘J. Condon, Royal Irish Regiment, 24th May 1915, Age 14’.
John Condon was the youngest recorded casualty on the Allied side in the WWI.
He lied about his age to join the Royal Irish Regiment as a reservist in 1913.
He arrived in France in December 1914 and was attached to the Second Battalion of the Royal Irish Regiment.
In April and May 1915, he was involved in the Second Battle of Ypres when the Germans used poison gas to attack the Allies’ position.
He died in a gas attack on May 24th – the second last day of the battle.
For most fourteen year olds, their primary concerns probably revolve around exams and socialising.
It’s hard to imagine what must have been going through the mind of 14 year old John as he left his home in Ballybricken and made his way to battle.
The grave alongside John Condon’s in Poelkapelle Cemetery belongs to Private T. Carthy who was 47 when he died. 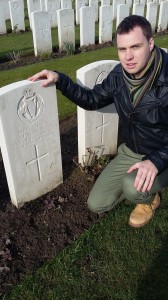 So, here was a fourteen year old boy from Ballybricken fighting alongside grown men, some of whom were thirty (or more) years his senior.
While most Waterford people are familiar with the name John Condon, I was delighted to learn that his name is also well-known throughout Belgium.
In fact, our tour guide Simon had a vast knowledge of John Condon and informed me of a book by a Belgian journalist based on the soldier’s short life which is popular amongst Belgian schoolchildren.
Sadly, the Irishmen who fought and died in WWI were not officially acknowledged for many years.
Thankfully, as a nation, we have now given Irish soldiers who fought in WWI the recognition which they undoubtedly deserve.
Dungarvan’s fantastic memorial to those from Waterford who fought in WWI is evidence of this.
And, of course, in Waterford City we have a specially commissioned memorial to John Condon which was erected in 2014.
Hundreds of people were on hand to see the sculpture by artist Paul Cunningham be unveiled in Cathedral Square by Mayor of Waterford Cllr John Cummins.
Members of the Naval Service Reserve, the Organisation of National Ex-Servicemen and the British Legion were all present at the special event.
Willie Redmond’s grave in Locre cemetery represents another well documented Waterford connection to WWI.
Major Willie Redmond MP was a Catholic nationalist politician, a prominent Home Ruler and a former associate of Parnell who was imprisoned three times for taking part in Land League agitation.
His elder brother John Redmond was MP for Waterford City from 1891-1918.
There are numerous Irish names on headstones and memorials throughout the WWI battlefield sites, including many Waterford names such as Foley, Power, Walsh, McGrath etc. 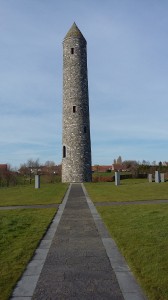 The symbolic Round Tower at the Island of Ireland Peace Park, Messines.

The Island of Ireland Peace Park in Messines near the Belgian-French border is a special tribute to all the soldiers of the island of Ireland who fought in WWI.
The Peace Park was the setting for the famous moment when Queen Elizabeth II and President Mary McAleese stood side by side at a special ceremony in 1998 to commemorate the Irish who fought in WW1.
This was the first time that an Irish government formally recognised all Irishmen, north and south, Catholic and Protestant, who fought together in WWI.
The nearby Messines Peace Village is a specially constructed complex which includes a hostel for youth groups.
The hostel includes sections named after both John Condon and Willie Redmond.
There are numerous other Irish related memorials including a memorial to the Royal Munster Fusiliers in the shadow of the rebuilt cathedral in Ypres.
An inscription on this beautifully engraved cross reads that it was erected “In memory of those men of Munster who died fighting for freedom”.

Kieran at the Royal Munster Fusiliers Memorial in Ypres.

Ypres is also home to the ‘In Flanders Field Museum’ but is now perhaps most famous for the Last Post Ceremony at Menin Gate.
The stone panels of Menin Gate contain the names of 54,395 Commonwealth soldiers.
Every night at 8pm, a moving ceremony takes place under Menin Gate which includes the Last Post bugle call.
This is followed by a minute’s silence.
Attending this ceremony was a truly special and poignant occasion.
Not far from Ypres is the Passchendaele Memorial Museum which remembers the 1917 Battle of Passchendaele.
Recreated trenches provide visitors with a glimpse into the conditions which were endured by soldiers.
While travelling across Flanders, it’s hard not be overwhelmed by the immensity of the loss of life during WWI.
This emotion is particularly evident at Tyne Cot Commonwealth War Graves Cemetery which is the largest cemetery for Commonwealth forces in the world for any war.
In addition to these large and well-known graveyards and memorials, there are numerous smaller graveyards and memorials dotted throughout the countryside. 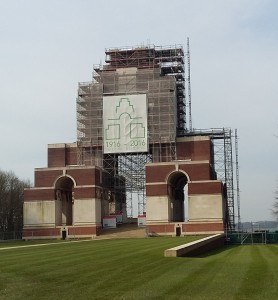 Thiepval Memorial which is under reconstruction ahead of commemoration events.

Across the border in France, preparations are well underway to mark the 100th anniversary of the beginning of the Battle of the Somme at the famous Thiepval Memorial.
This impressive memorial, which was designed by Sir Edwin Lutyens and unveiled in 1932, is the largest British battle memorial in the world.
The Somme offensive, which claimed more than one million casualties, began on July 1st 1916 and carried on until November 18th on the banks of the River Somme in northern France.
By the end of the first day, there were 57,000 Commonwealth and 2,000 French casualties.
The offensive continued throughout the following months and men from every part of Britain and across the Empire took part.
By November, more than one million Commonwealth, French and German soldiers had been wounded, captured or killed.
Every year on July 1st, a commemorative service is held here in remembrance of the men who fought and died during the Battle of the Somme.
This year, a significantly larger event will take place.
Around 10,000 people are expected to attend a special ceremony and many dignitaries will also be in attendance including senior members of the Royal family.
The memorial is currently undergoing extensive refurbishment work ahead of commemorations.
An impressive visitor centre is located a short distance from the memorial which provides a fascinating insight into the Battle of the Somme. 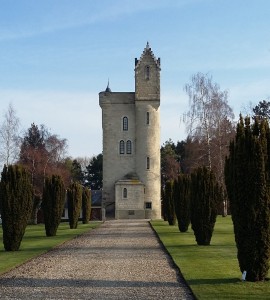 The Ulster Tower which commemorates the men of the 36th Division and all those from Ulster who served in the First World War.

There are plenty of Irish connections in this area as well, with the beautiful Ulster Tower located nearby.
This was erected in memory of the men of the 36th Division and all those from Ulster who served in the First World War.
Irish soldiers are also commemorated at Tyneside Irish Memorial in La Boisselle and the 16th Irish Division Memorial in Guillemont.
Irish names, and in particular Waterford and South-East names, are also common at the Beaumont-Hamel Newfoundland Memorial – clearly highlighting the strong connections between Newfoundland and Ireland’s South-East.
A visit to the WWI battlefield sites and memorials can be a challenging experience but it is certainly worthwhile.
While such tours have traditionally been popular amongst the British, their popularity has also grown in recent times amongst the Irish market.
In a year when so much emphasis is being placed on commemorating those who fought in 1916 (and rightly so) it is also important to commemorate all those Irish who also fought for freedom during WWI.
Our historian Dermot provided wonderful insights throughout the tour and certainly opened our eyes to the experiences of the Irish during WWI. 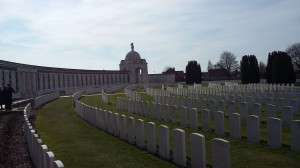 A poem by Patrick MacGill of the London Irish Regiment, which is inscribed on a memorial within the Island of Ireland Peace Park, brilliantly highlights the feelings of many Irish who fought in WWI.
I wish the sea were not so wide
That parts me from my love
I wish the things men do below
Were known to God above
I wish that I were back again
In the Glens of Donegal
They’ll call me coward if I return
But a hero if I fall 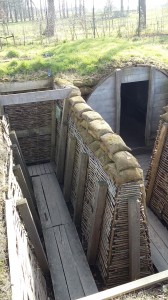 Recreated trenches at the Passchendaele Museum.

This trip is highly recommended for all those with an interest in history, especially as we approach so many momentous WWI anniversaries.