Home » Opinion » Foley on File » All Aboard for Issy's Tours

All Aboard for Issy's Tours

All aboard for Issy’s tours
LOCAL woman Issy Kennedy is aiming to spread some happiness and create new friendships through ‘Issy’s Tours’. Issy worked as a travel agent in Waterford for many years and has extensive experience of organising and planning excursions.
As part of her new initiative, she recently staged her first trip which was hugely successful.
She says the idea for ‘Issy’s Tours’ began while helping to organise transport to Dublin for last year’s march calling for 24/7 cardiac cover for Waterford and the South-East.
After having so much enjoyment en route, the group on Issy’s bus discussed the idea of organising another adventure. 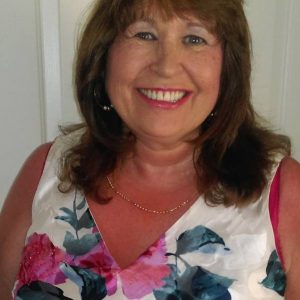 The vivacious Issy Kennedy who is aiming to spread some happiness and create new friendships.

“I’m a real doer so I said let’s do it,” explained Issy. “I started the ball rolling and asked people where they would like to go. A lot said Newbridge so I set a date and booked a 30 seater bus.”
Issy was delighted that 23 people participated on this first trip.
Most were people she already knew but she was delighted to see some new faces in attendance also.
“The camaraderie on the bus was amazing,” she said.
The trip incorporated visits to the Museum of Style Icons, Whitewater Shopping Centre and Newbridge Silverware where a table was reserved for lunch to enable everyone to sit down in a comfortable setting and get to know each other better. The trip left Waterford at 10am and returned home by 8pm.
“We had total fun from beginning to end,” said Issy who had brought along 60s and 70s CDs for a sing-song.
She is keen to stress that her trips are open to absolutely everybody (men and women of all ages) and are different to trips organised by other clubs or groups.
“These trips are for everybody. You don’t have to be a member of any group or commit to anything,” explained Issy, who said the Newbridge trip consisted of best friends, siblings, couples and singletons. 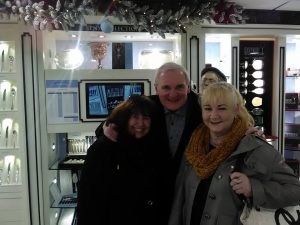 “The main reason I’m organising these trips is to try to encourage people to come along and meet new people. I think there are a lot of lonely people out there who may be looking for things to do on a Saturday or Sunday for example.”Issy says her own personal experience of mental health issues allows her to empathise with people who may be in similar situations.
“The best way to try to overcome loneliness or mental health issues is to go out your door and meet people, even if you’re just going someplace different to sit down and have a coffee,” she said.
“A lot of other trips are more specific but ‘Issy’s Tours’ are open to everybody. However, we’re not a lonely hearts club and we’re not a dating club.”
Issy, who now holds BA degrees in both Adult Education and Teaching in Further and Adult Education, is keen to highlight the huge importance of the concept of personal development.
This is something which she has explored in great detail through her return to education.
She hopes that ‘Issy’s Tours’ helps with her own personal development as well as the personal development of those participating in the trips.
“I have a mental health issue so I know the importance of human contact. Getting out of the house is so important and laughter really is the best medicine,” she said.
Due to the success of the Newbridge trip, Issy now plans on organising a trip once a month and aims to keep costs to a minimum.
She has organised a trip to Mahon Point Shopping Centre in Cork for this Saturday January 13th.
“A lot of people don’t drive and Mahon Point is difficult to get to if you don’t drive,” said Issy who added that she is keen to give people an opportunity to visit locations which may otherwise be difficult to access.
“But I’m leaving it up to the people to decide where they want to go so if there’s anyone out there who wants to go someplace in particular please come and talk to me.”
She says many of those who went to Newbridge are also coming on the Cork trip and a visit to IKEA in Dublin is already planned for March. 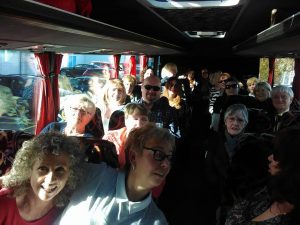 A group of happy participants on board for ‘Issy’s Tours’

Weekends away may also be organised in the future.
Issy, who by her nature is a very positive person, says she is trying to bring out the positivity in other people.
“Some people like shopping, some like sightseeing,” she said.
“The bottom line is about having craic and getting to know new people. It’s also a bit of a break for people who may have commitments. These are trips which don’t cost a fortune. You don’t have to worry about driving or parking fees and you can have a glass of wine with your lunch when you don’t have to drive.”
There are still some spaces available for this Saturday’s trip to Cork which costs €25 and is payable on the bus but places must be booked in advance.
Issy, who says they are lucky to have a great bus driver in Tom from Alan Duggan Coaches, is looking forward to another great day out.
This Saturday’s trip departs Dooley’s Hotel at 9.45am and calls to the bus stop at Tesco Ardkeen at 10am and will return to Waterford by 8pm/8.30pm.
With Issy at the helm, all those in attendance are assured of a well organised trip with plenty of laughs en route!
For more information, check out the ‘Issy’s Trips’ Facebook page or call Issy on 083-3196215