Responding within a community.
COMMUNITY First Responder (CFR) schemes perform a hugely important role in communities throughout Ireland, fighting sudden cardiac death and cardiovascular disease.
The importance of CFR volunteers is clearly evident when you consider that 10,000 people die in Ireland each year from cardiovascular diseases.
Volunteers are trained to deal with a variety of issues including chest pain, sudden collapse, stroke, choking etc.
Here in Waterford there are a number of groups which are providing this much needed service including the Kilmacthomas CFR group.
This group was initially formed following a sudden death in the village four years ago.
Following this tragedy, Brian Jackman and James Power, who had both responded at the scene, decided that the village needed a structured CFR presence. 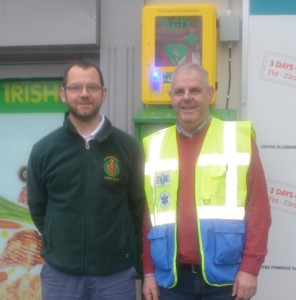 “We sat down and identified people in the village with experience and relevant knowledge and we approached these people and established a steering group,” explained Brian who works as a Paramedic with the National Ambulance Service.
“Once we explained to people what we were doing we had no difficulty in getting people on board.”
A public meeting was held at St Declan’s Community College in the village.
“From that meeting, around eight people expressed a willingness to become volunteers and responders. We trained them and they made the commitment with us,” said Brian.
The Kiersey and Joy families contributed enough funds so that an automated external defibrillator (AED) could be purchased –something which was greatly appreciated by all involved with the group.
“Word began to spread on the grapevine that if somebody had a problem they could ring us,” explained Brian.
In September 2015, the Kilmacthomas group officially became part of the CFR structure.
“This allows us to have one voice when looking for funding, support, training etc.” explained Brian.
There are now hundreds of similar groups throughout the country which are under the CFR umbrella.
Each group can be activated by the ambulance service when required.
The Kilmacthomas CFR group has been alerted four times since becoming part of the system.
“Our last call-out in 2015 was on New Year’s Eve and our first call-out of 2016 was on New Year’s Day,” explained Brian.
The committee, which is comprised of Brian and James along with Dr David Janes, Siobhan McCormack, Nicky Butler, and Gary Corcoran, hold regular meetings.
Currently, there are 16 responders (including the committee) and all undergo relevant training once every four weeks.
In nearby Newtown, there is a newly established CFR group which recently received a donation of a defibrillator from CRY (Cardiac Risk in the Young).
Both the Kilmacthomas and Newtown groups work together and also co-operate with other local CFR groups in the area such as Kill, Bonmahon and Portlaw.
Each group covers a 5km radius which ensures that a vast area of Mid County Waterford is served by this admirable volunteer service.
“For an ambulance to come from Dungarvan or Waterford to Kilmacthomas it could take 15 or 20 minutes. That’s critical time in which a person will either survive or not,” explained Brian.
“Our role is to provide immediate care as fast as we can and link in with the ambulance service. The ambulance service knows that we are part of the chain so when we arrive on the scene we get as much information as we can and we then hand over when the ambulance crew arrive.”
All involved with the group are thrilled that a public access defibrillator will now be located outside Phelan’s Centra Kilmacthomas.
This is the third defibrillator which Phelan’s Centra has sponsored, as Owner Pat Phelan explained.
“We sponsored one for the fire station, one for Kill Community Centre, and when the lads approached us about this I didn’t have to think twice. It was nice to be asked to do this and Phelan’s Centra is an ideal location for a defibrillator.”
He continued: “The village isn’t a small place – far from it. We have a fire station, a Garda station, a supermarket, lots of facilities. We’re very fortunate to have the network of trained people which we have compared to some villages. This is a great service for the village. The volunteers are giving up their time for the village and they should all be commended.”
In addition, 12 staff members from Phelan’s Centra will be trained in the use of the defibrillator.
“The great thing about a public access defibrillator is that anyone who knows what they’re doing can access it. But even anyone who doesn’t know how to use it can access it and it tells you what to do step by step,” explained Brian.
The Kilmacthomas CFR group holds a public fundraiser once a year which has always been well supported.
“The community knows we are here and what we do and that’s evident from the amount of support we receive,” said Brian.
“Businesses have also approached us offering to help.”
All involved with the group are grateful to Pat Phelan and Phelan’s Centra for their support and also thanked Ray Cowman of the Civil Defence and everyone else who has helped in any way.

For more information on Kilmacthomas CFR email kilmaccfr@gmail.com or check out their Facebook page.