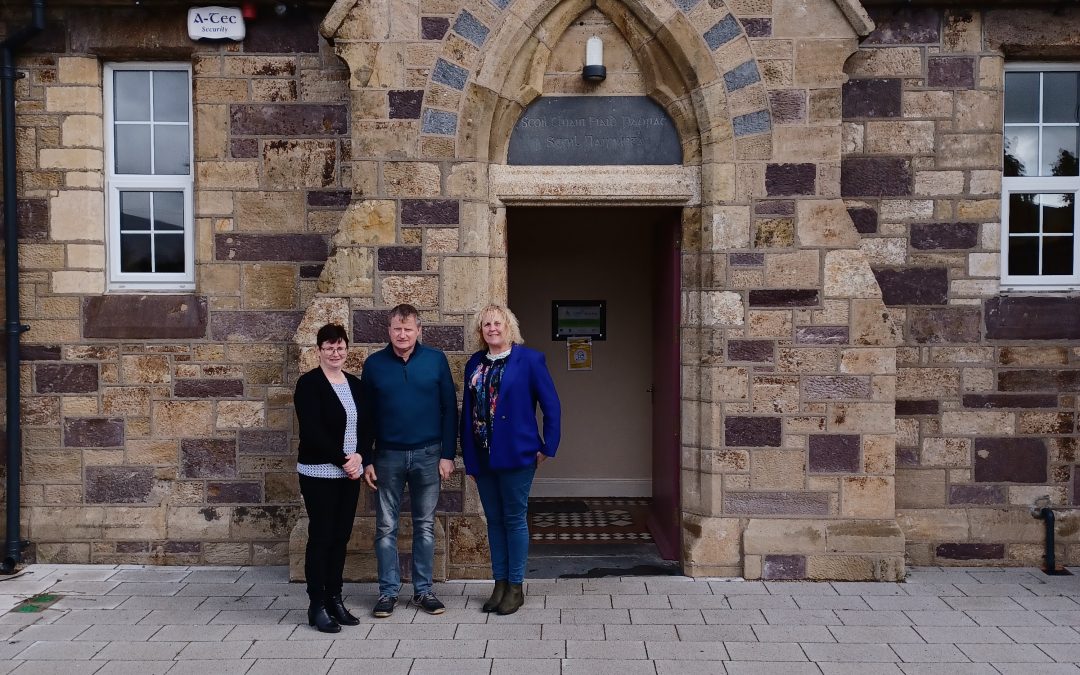 The picturesque village of Clonea Power, situated at the foothills of the majestic Comeragh Mountains, is unquestionably one of County Waterford’s hidden gems.

A landmark building within this charming village was recently renovated and the end result is testament to the determination and enterprising spirit of members of this local community.

Clonea National School, which was 150 years old in 2020, is located near the stunning Saints Quan and Broghan Church. Both were designed by renowned architect JJ McCarthy.

Many generations of children from Clonea and the surrounding areas were educated in the historic school building, which was divided into two separate schools, one for boys and one for girls, each with two classrooms.

A new, more modern school was opened in 1977. The old school house served as a Parish Hall since then but was in need of extensive repair throughout the building. 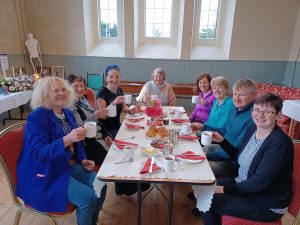 A hardworking committee comprised of industrious members of the local community came together with a view to renovating the building and creating a modern, community space.  They enlisted assistance from Waterford Leader, the Tomar Trust, Waterford City & County Council, Clann Credo, and had the steadfast co-operation of Fr PJ Fagan and Cllr Seanie Power. 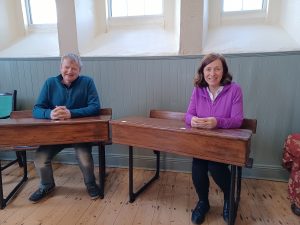 Sean Cusack and Mary Sullivan, both past pupils of the school.

After going to tender, Comeragh Carpentry secured the contract for work on the building along with Vincent Murray Designs as the architect.

The current committee, comprised of Mary Fahey, Sean Cusack, Rose Fogarty, Anne Hennebry, Ciara O’Hehir, and Catherina Power, were all determined to see their dream become a reality. The committee’s initial aim was to keep the building standing and stop if from deteriorating as they feared it was going to collapse.

As a protected building, there was only so much that could be done. For example, the existing floorboards and fireplaces had to remain in place and the committee members were happy to work within these requirements. The building received new slates, was rewired, and made more comfortable and inviting as a community space again.

As would be expected with such an ambitious project, significant fundraising is required on an ongoing basis. The committee estimates it will need to raise nearly €20,000 a year to pay back its debts.

Following the onset of the Covid-19 pandemic, and the subsequent restrictions which were implemented, the committee had to vary their fundraising endeavours.  Its online ‘Sponsor a Slate’ initiative proved to be a huge help during this period.

Additionally, committee member Sean Cusack embarked on a mammoth fundraiser by cycling 100km per day for seven days.  Sean will continue his fundraising efforts by cycling 100k on the Wicklow Way in two weeks’ time and donations can be sent to the GoFundMe link at end of article.

Like his fellow committee members, Sean is driven by a sense of pride of place.

“I’ve lived here all my life, and over the years the Scouts, the youth club and Macra na Feirme have used the hall. People have very happy memories,” he explains.

On a recent visit to the old school house, it was a pleasure to witness the stunning transformation which has taken place.

Present in the building during my visit was Ger Houlihan who runs Pilates classes on Mondays at 6.30pm, Tuesdays at 7pm, and Wednesdays at 10am. Her classes are suitable for all fitness levels, all age groups, with both male and female very welcome.

Ger has been a fitness instructor for over 25 years and has been involved in all types of fitness.

“Pilates is brilliant,” she explains. “It’s marvellous for core strength and stretching and it’s a wonderful mind/body workout.”

Ger is delighted to have such an impressive room within the building for her classes and is thrilled to have a local location.

“It’s wonderful to have somewhere local like this,” she says. “It’s just ten minutes from Carrick and Kilmacthomas and I only live a few minutes from here.”

She believes there is potential for many other classes to be taught at the old school house.

“This room is excellent and can be used for Yoga, circuit training, Zumba, and it’s very inexpensive to rent,” she says. “It would be lovely to get something going for teenagers,” she adds. 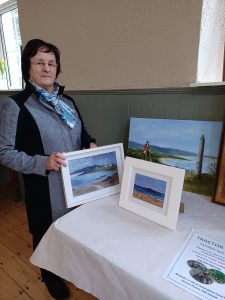 Claire Moore with some of her paintings. 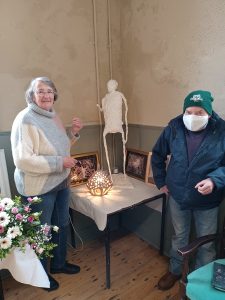 Shirley Walsh and Kevin Cahill beside their creations on display in Clonea Parish Hall.

On display along the walls of the corridors are fascinating portraits by local photographer Margueritte Kent of some members of the local community. This exhibition was compiled as part of a project entitled ‘Our Future is in Our Past’ in collaboration with Creative Ireland. An online video featuring older people speaking about their experiences was also produced by videographer John Bermingham and includes some wonderful stories from locals who attended school in the building.

Also on display during my recent visit were impressive paintings by local artist Claire Moore who specialises in local scenes. Her work features locations such as Ardmore, Ballinacourty, Clonea Strand, and the Mahon Falls,

“I’m looking out the window at the mountains every day,” says Claire. “And every time you look out the landscape changes.”

Committee member Rose Fogarty says there has been huge interest in the project to renovate the old school house within the locality and there has been significant support.

“The old school house is in the centre of the village and it’s part of people’s heritage,” she explains.

“We have a lot of good people behind us. Some people don’t want to be on a committee, but they are ‘hall helpers’ and we can give them a text whenever help is required.”

Rose explains that the committee’s aim is to see the old school house become an all-encompassing community hub which is used by local people for a whole host of activities instead of travelling to other locations.

“Since Covid, it’s more important than ever to bring people together and keep people local,” says Rose.

The restored building has already been used for gatherings after funerals and has been availed of by groups such as the ICA, IFA, GAA, and Clonea Power Tidy Villages for various meetings. A high-profile meeting to discuss a proposed solar farm in the area, attended by more than 200 people., was also held in the building.

The committee believe there is further potential to see the building used by people visiting the graveyard and church; for kids’ birthday parties; as a stopping off point by cyclists passing through the village; or anyone out and about in the area. 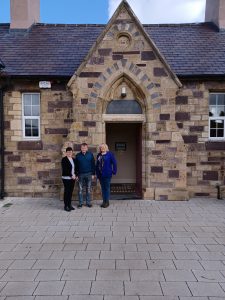 Pictured outside the building are Mary Fahey, Sean Cusack and Rose Fogarty.

Shirley Walsh hopes to hold ‘Knit and Natter’ classes, while there are also plans to stage cookery demonstrations in conjunction with the WWETB.

The committee’s long-term vision is to see the development of vintage tea rooms which they believe would be a perfect fit for the building. Committee members have visited Billy’s Tearooms and Shop in Ballyhale which is community run and has proved hugely successful. They are inspired by what has been achieved in this South Kilkenny community and are confident that such an initiative could be replicated in Clonea Power.

“It can be done if enough people come together,” says Rose. “It’s very hard to keep going constantly, so we need people to come forward. I would love to see the door open all the time, with people strolling in and out, having a coffee, and admiring all that’s good about Clonea.”

She continues: “It doesn’t have to be big crowds of people – just small groups enjoying getting together. We want to see people coming in the door, using the building, and thinking of coming here before going somewhere else.”

Rose adds that fibre broadband is located just outside the door and, although it hasn’t been installed within the building yet, this could be explored if there is interest in developing a remote working hub.

A florist, Mahon Flowers, has already taken up residence within the building and it’s hoped that this level of activity can be enhanced.

“We’re willing to work with anyone who has an idea,” says Rose.

The committee members are working with Martin Whelan and the staff and children of Clonea National School on a number of projects including the history of the building and the area as well as the children’s community garden projects.

Rose explains that there are also plans to stage some events within the building as part of the upcoming Comeraghs Wild Festival. 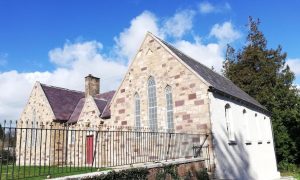 The impressive achievements at the old school house certainly complement the other remarkable achievements within the local area. Rose paid tribute to the Clonea Power Tidy Villages group who “got the ball rolling”.

“People started to see what could be achieved,” she says.

Achievements in neighbouring Rathgormack, which is now home to the impressive Comeragh Amenity Area, further highlight what has been accomplished.

“The two villages are stunning and work very well together,” says Rose.

It’s clear that all involved in the project to renovate the old school house possess huge enthusiasm and determination. Furthermore, it’s evident that the success of this project has engendered a reinvigorated pride of place within the wider community.

Having already achieved so much, the future is certainly very bright for the wonderful Clonea Power community.

To donate as part of ‘Sponsor a Slate’ visit https://www.gofundme.com/f/700K-FOR-THE-HALL-IN-CLONEA Keep up to date with activities at the Clonea Power Parish Hall on Facebook and Instagram