Fine Gael Cllr Liam Brazil is once again holding his charity cycle to raise awareness of mental health and suicide in County Waterford.
A CHARITY cycle to raise awareness of mental health and suicide is being organised by a local Councillor once again this year.
With the support of his family and local community, Cllr Liam Brazil (FG) has staged this cycle for the past three years.
Beginning and finishing at Crotty’s Inn in Leamybrien, the 50k Mental Health and Suicide Awareness Cycle takes place on Easter Sunday April 1st this year and travels throughout Mid-County Waterford incorporating Durrow, Bonmahon, Kill and Kilmeaden.
The cycle has been very successful in the past and Cllr Brazil is once again hoping for significant support this year.
At the February Comeragh District meeting of Waterford City & County Council held in Dungarvan last week, Cllr Brazil delivered another passionate speech in which he outlined the importance of speaking about mental health and suicide. He explained that the cycle is aimed at creating awareness around mental health and suicide and spoke of the problematic issue of rural isolation. He also outlined (as he has often done in the past) the impact which suicide has on family, friends and the wider community. “When mental health issues strike a family it’s very tough on everyone involved,” he said.
“People try to kill the pain with suicide as they think that their pain will be removed. Yes, their pain will be removed but their handing that pain onto somebody else. It’s the hardest thing any family can ever go through.”
He recalled his own family’s experiences in the aftermath of his brother’s untimely death.
“No one knows more so than myself about the mental health issues that can occur in a family,” he said. 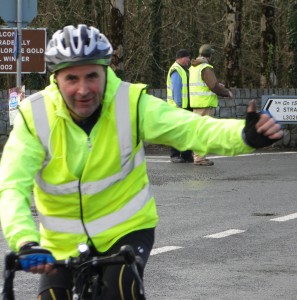 Cllr Liam Brazil and his wife Marie pictured at the 2015 cycle.

“I stood at a graveside to bury my brother James 30 years ago. When suicide strikes, it is probably the toughest thing that will happen to any family.”
He recalls that “people couldn’t look at you straight in the face afterwards” but is now glad that attitudes towards mental health and suicide have changed drastically.
“The public now understand that there are issues associated with mental health and suicide,” he said.
“It’s important to let people know there is help out here and that somebody is doing something to help them.”
However, he highlighted the ongoing prevalence of suicide throughout Ireland and the issues which still need to be addressed.
“Suicide is happening every day of the year in houses throughout our country,” he said.
“Around 500 people per year still take their lives by suicide – and that’s only reported suicides. For every three people who take lives, one will go unnoticed.”
He continued: “Years ago, it was said that poor people took their lives by suicide. In recent times you see high ranking people taking their own lives and that brings it home to people that mental health should be treated the same as any other illness in society.”
Coming from a rural area himself, Cllr Brazil is keenly aware of the issues which face many people who are living in isolation.
“There are many people living in rural areas who are on their own with no contact,” he explained.
“Previously, they may have been able to go to the local pub and might have the postman calling to them. Now, they might only see people at Mass on a Sunday. But you don’t have to live in isolation to be affected by mental health. There are people living in Waterford City and Dungarvan who are also affected by mental health and feel isolated and lonely.”It’s not just the annual cycle which Cllr Brazil has organised as he has also staged successful conferences in Dungarvan which have addressed issues associated with mental health and suicide and which have attracted many high profile guest speakers.
He has also participated in the popular Cycle Against Suicide event and has also spoken extensively about mental health issues at meetings of Waterford City & County Council. Kilrossanty GAA was one of the first clubs in the country to step out and proudly support positive mental health and mental health awareness with their new jerseys which were sponsored by Cllr Brazil. 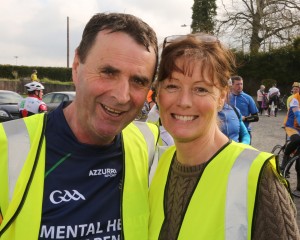 After hearing Cllr Brazil’s passionate speech at last week’s Council meeting, Cathaoirleach of the Comeragh District Cllr Seanie Power (FG) complimented his work on mental health awareness. “I know you go to schools and GAA clubs to give talks and your work is a credit to you,” he said.
Funds raised from the upcoming cycle will enable the ‘Suicide or Survive’ charity to deliver Wellness Workshops, Wellness Recovery Action Plan (WRAP) programmes and Supporters Programmes to the people of Waterford.“This cycle is to promote positive mental health, to remove the stigma attached, and to get people out and about so they realise that they can look for help,” said Cllr Brazil.
Well done to Cllr Brazil, his family and local community for staging such a positive and inspiring event which is certain to be well supported once again this year
Cost of entry is €20 but all donations are welcome. Registration is from Crotty’s Inn at 9am on April 1st with departure at 10am. Registration is also available online at https://tinyurl.com/LBrazil50kcycle A shorter route is available. For more information contact Cllr Liam Brazil on 087-2119203.